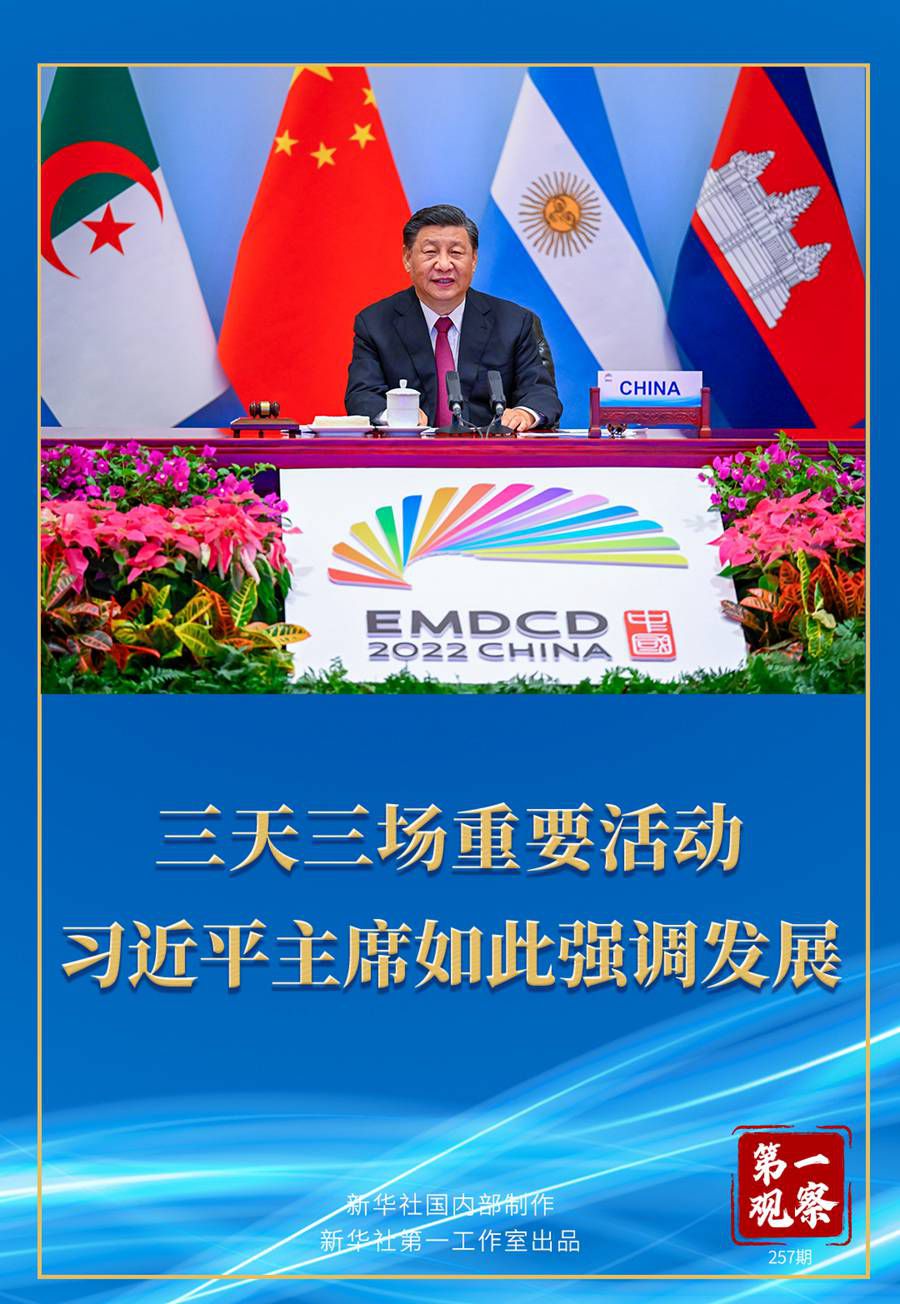 From June 22 to 24, during the highlight period of the BRICS "China Year", for three consecutive nights, President Xi Jinping attended the opening ceremony of the BRICS Business Forum by video, presided over the 14th BRICS Leaders' Meeting, High-level Dialogue on Global Development.

On the evening of June 24, in the Great Hall of the People in Beijing, President Xi Jinping presided over a high-level dialogue on global development by video and delivered an important speech.

"In the past few years, I have traveled all over China's urban and rural areas, and visited many countries. I deeply feel that only continuous development can realize the people's dream of a healthy life and a peaceful society." "Only people of all countries can live a good life. Prosperity will last, security will be guaranteed, and human rights will have a foundation.”

Development is the eternal theme of mankind, and it is also the key to solving various problems and realizing people's happiness.

At present, world development has entered a new period of turbulence and change. The century-old changes are superimposed and resonated with the epidemic of the century. The economic recovery is difficult, the security challenges are more prominent, the implementation of the United Nations 2030 Agenda for Sustainable Development is hindered, and the 1.2 billion people in nearly 70 countries around the world are facing the epidemic. , food, energy, debt crisis.

Standing at an important juncture in the development of human history, how to build a consensus on development?

How to achieve development goals?

So far, this initiative has received responses from more than 100 countries and international organizations, and more than 50 countries have joined the "Group of Friends of the Global Development Initiative" established by China on the United Nations platform.

At the high-level dialogue on global development on the 24th, President Xi Jinping proposed that all parties "build an international consensus to promote development"——

"We must place development at the center of the international agenda, implement the UN's 2030 Agenda for Sustainable Development, and build a political consensus that everyone attaches importance to development and that all countries seek cooperation."

President Xi Jinping's words are inspiring: "We must recognize the general trend of world development, strengthen our confidence, and act together. We must join forces and work together to promote global development and jointly create an inclusive balance, coordination and inclusiveness, and cooperation and common interests." A development pattern of win-win and common prosperity.”

For some time now, economic globalization has encountered "headwinds and currents".

Some countries want to implement "decoupling and breaking the chain" and build a "small courtyard with high walls".

At the opening ceremony of the BRICS Business Forum, President Xi Jinping, in his keynote speech, grasped the general trend of the times and guided the direction of global development.

He pointed out that economic globalization is an objective requirement for the development of productive forces and an irresistible historical trend.

Going backwards in history and trying to block other people's way will only block your own way in the end.

At the 14th BRICS Leaders' Meeting, President Xi Jinping proposed that "we should open our doors for development and open our arms to promote cooperation".

At the High-level Dialogue on Global Development, President Xi Jinping emphasized: "Protectionism is a cocoon, and creating a 'small circle' will only isolate oneself, limit sanctions to harm others and harm oneself, and decoupling and cutting supply will not work and will not go far."

Facts have proved that inclusiveness, mutual benefit and win-win results are the right path in the world.

Sixteen years ago, the BRICS countries came together to achieve the grand goal of common development.

Today, the BRICS cooperation mechanism has become an important platform for cooperation between emerging market countries and developing countries.

Adhere to cooperative development and jointly cope with risks and challenges.

President Xi Jinping pointed out that all parties should work together with one heart and one mind, strengthen macroeconomic policy coordination, and prevent the slowdown or even interruption of the global recovery process.

Adhere to openness and inclusiveness, and deepen and expand "BRICS+" cooperation.

In addition to the BRICS countries, China specially invited leaders from 13 emerging economies and developing countries to the Global Development High-level Dialogue.

As President Xi Jinping pointed out, the BRICS countries are not closed clubs or exclusive "small circles", but a big family that helps each other and good partners for win-win cooperation.

For the business community, President Xi Jinping encouraged them to carry forward the spirit of perseverance and bravery in the opening ceremony of the BRICS Business Forum, to be the promoter of open development, the leader of innovative development, and the practice of shared development. By.

The business community is a new force in promoting BRICS pragmatic cooperation.

At present, BRICS cooperation has entered a new stage of high-quality development, bringing together the forces of all parties, including the business community, to make the cake bigger and focus on actions, so that more development achievements can benefit all people in a fairer way.

"Agree with one heart and one mind, everything can be achieved", "Strengthen your confidence, and do it"... President Xi Jinping's firm words give people confidence and strength, and in each friendly interaction, a wide range of parties will work together for mutual benefit and win-win results. consensus.

Under the leadership of President Xi Jinping, the "Chinese Year" of BRICS has been fruitful.

The leaders' meeting adopted and issued the "Beijing Declaration of the 14th BRICS Leaders' Meeting", which contains 25 items related to "promoting economic recovery" and "accelerating the implementation of the 2030 Agenda for Sustainable Development".

President Xi Jinping pointed out: "We must adhere to the heart of the people and the interests of the world, so as to push global development into a new era and benefit people of all countries."

Resolute action is the practice and portrayal of this idea.