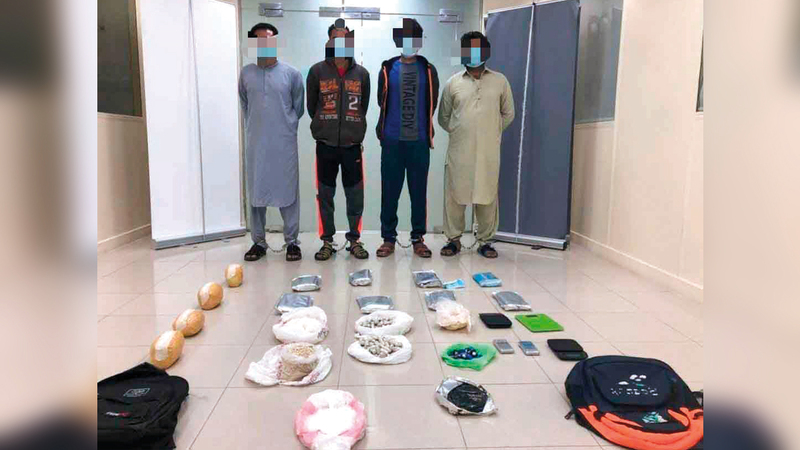 The report noted the efforts and achievements that have been made, both at the local level and at the international level, in the field of drug control, noting that the number of drug reports received by the control agencies at the state level increased by 18% last year, compared to 2020, when the number reached 5677 reports, compared to 4,810 reports in 2020.

He pointed out that at the international level, the Ministry of Interior, represented by the anti-drug agencies, was able to strike networks of smuggling and drug promotion in its own home, through distinguished regional and international cooperation with counterpart agencies in those countries.

The UAE participates with the countries of the world in the celebration of the World Anti-Drug Day, which falls on June 26 of each year, and is held under the slogan “Drugs are a painful end.”

The UAE and its leadership had a vigilant insight that made them aware of the danger of drugs, and the damage caused by that scourge at all levels, health, social, economic, security, and others, so it spared no effort to immunize its children from this danger that destroys the stability of families, and the state has strengthened cooperation with the international community, and all The relevant international bodies and organizations, in order to combat this scourge.

The Deputy Chief of Police and Public Security in Dubai, Chairman of the State-level Anti-Narcotics Council, Lieutenant-General Dhahi Khalfan Tamim, stressed that "the problem of drug trafficking is one of the most prominent security challenges facing the control agencies in the world, and despite all the difficulties and challenges, we are determined." To transform these challenges into opportunities by developing and raising the capabilities of work teams and drug control men at the state level in discovering new innovative criminal patterns, and methods that drug dealers and promoters can resort to as an alternative to the prevailing and known methods they used to follow, in light of restrictions and precautionary measures and precautions taken by the state.

He said that "drugs are one of the most dangerous pests facing members of society, as they lead to the destruction of generations and their future, and push them towards crime, violence and theft, in order to provide the necessary funds to buy drugs, but it is possible to stand in the face of this scourge through the concerted efforts of all parties." And not to allow drug promoters and dealers to infiltrate the sons and daughters of society.”

He added that "the Council for Combating Drugs at the state level, did not hesitate to implement the national strategy to combat drugs," noting that "in the four years of its formation, great and impressive achievements have been made in the operations of arresting suspects in drug crimes, and this is what was shown by the results of the indicators and targets that were They set them as primary goals, which have been exceeded in stages, which gives us the incentive and motive to move forward and vigorously to confront everyone who begs himself to disrupt the security of the country from smugglers and drug traffickers, and to arrest the perpetrators at all costs.”

For his part, the Director-General of Federal Anti-Narcotics at the Ministry of Interior and Vice-Chairman of the Anti-Narcotics Council, Brigadier Saeed Abdullah Al-Suwaidi, said that "the UAE's efforts to combat drugs are in accordance with the national anti-drug strategy, and the state has worked continuously to update laws and legislation related to drug control, and to The security level The police authorities worked in full swing, through their comprehensive security strategy, to consolidate the state of security and stability in the country, by keeping pace with modern developments and using the best technologies to achieve the best levels of security. Promotions over the past years.

He added that the efforts of the Ministry of Interior contributed to limiting the supply and demand for this scourge, as it launched several initiatives to determine the extent of drug spread in the country according to the highest successful global practices and experiences, and adopted an electronic platform, in cooperation with the health sector in the country, to monitor the disbursement of narcotic drugs to reduce misuse it.

He pointed out that the ministry pays great attention to drug control, and has provided all human, technical and material capabilities for the country's control agencies to enable them to carry out their duties in confronting them, and to cooperate with the concerned authorities, at all national, regional and international levels.

Over the past five years, the UAE has won first place in the award for the best operational information field cooperation at the Arab, regional and international levels, which led to the seizure of drug smuggling networks, according to data issued by the General Secretariat of the Council of Arab Interior Ministers.

The head of the Supreme National Committee for Drug Prevention, Colonel Dr. Rashid Al-Dakhri, said that the drug prevention strategy in the Ministry of Interior seeks to create a society aware of the dangers of narcotics and psychotropic substances, empower state institutions and members of society and build their capabilities and skills to prevent narcotics and psychotropic substances, according to a methodology Scientific aims to raise the level of societal awareness of the dangers of drugs, develop personal skills and moral values ​​that enhance happiness and positivity, and enhance the role of the family to contribute to the prevention of narcotics.

He added that the National Committee is working to activate social responsibility, spread awareness among the various components of society, and enhance the awareness of the younger generations about the dangers of drugs and addiction and its repercussions. This requires the various bodies and components of society to unite to protect children from this deadly scourge, and the role of the family cannot be separated from the role of educational institutions, the media, civil society organizations and other police, health and cultural institutions. The parties are combined, and any defect or negligence in the role of one of them exposes young people to the dangers of addiction.

The Chairman of the Supreme National Committee for Drug Prevention, Colonel Dr. Rashid Al-Dakhri, confirmed that the committee implemented many awareness initiatives, in cooperation with the ministries, departments and concerned authorities, and awareness workshops were organized for parents, to raise their abilities to protect their children from addiction, and issued a guide for parents to prevent drug addiction. Drugs, given that the family is the basic building block of society.

The committee also carried out awareness lectures on the harms of drugs to the educational and training staff to raise their abilities and skills in informing students of how to prevent themselves from abuse. The topic of community awareness was included in Friday prayer sermons, to address the issue of drugs and their harmful effects on society, and it also issued a guide to drug prevention in the school environment. .