The leaders of the Group of Seven countries held in Elmau Castle in the southern German province of Bavaria a summit yesterday, at a time when the world is in crisis, starting with the war in Ukraine, passing through the climate, and ending with food security. The leaders of the great powers, including US President Joe Biden, met in the mountains Alpine Alps 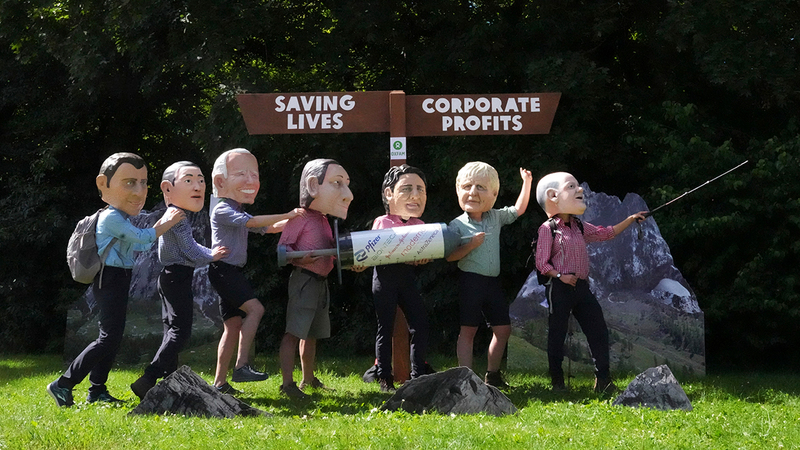 Activists appear in models in the form of the leaders of the Group of Seven, carrying a banner summarizing the problems that the world suffers from, demanding their solution in front of the summit headquarters yesterday.

The leaders of the Group of Seven countries held a summit in Elmau Castle in the southern German province of Bavaria yesterday, at a time when the world is in crisis, starting with the war in Ukraine, through the climate, and ending with food security.

The leaders of the great powers, including US President Joe Biden, met in the Bavarian Alps to attend the annual summit of the seven major industrial countries (Germany, Canada, France, Italy, Japan, Britain and the United States).

Thousands of police were deployed to ensure the security of the summit, which will continue until Tuesday, in a luxury complex at the foot of the mountains.

And about 100 kilometers from the place, thousands of demonstrators marched on the streets of Munich, on Saturday, to demand stronger action for the benefit of the climate.

Don't give up on Ukraine

Continuing support for Ukraine will be at the heart of the G7 meeting, and high on the agenda of a two-day NATO summit in Madrid, starting June 28.

German Chancellor Olaf Scholz, whose country is hosting the G7 summit, said supporting Ukraine would require "perseverance because we are still far" from peace negotiations between Kyiv and Moscow.

Ukrainian President Volodymyr Zelensky, who is addressing the leaders of the Group of Seven, today, via video, will demand again to send heavy weapons to his country, after the Russians took control of Severodonetsk (east).

On the eve of the summit, British Prime Minister Boris Johnson called on the leaders of the Group of Seven to "not abandon Ukraine", warning against any "slackening" in support of Kyiv.

However, the White House denied the existence of any Western inaction, and Kirby said, "We have not seen cracks and fissures" within "NATO."

It is expected that the significant reduction in gas shipments from Moscow, which aims, according to Westerners, to cause an energy crisis in Europe before winter, will be at the top of the agenda of discussions as of Sunday.

The leaders of the seven countries began their talks with a session on the global economy, which is suffering from rapid inflation.

The participation of Indonesia, India, Senegal, South Africa and Argentina, which are emerging economies particularly vulnerable to food shortages and the climate crisis, at the summit aims to forge common responses to these challenges.

Climate actors expect significant progress from the G7, including "planning" to phase out fossil fuels completely.

And the bilateral sessions began yesterday morning, with a meeting between German Olaf Scholz and Joe Biden, who each face difficult situations in their country.