1010 employers offer jobs and training opportunities for citizens on “Nafis”

A statistic showed the extent to which institutions and employers affiliated with the private sector interacted with the set of incentives and decisions taken by the state government to encourage enterprises to raise the competitive efficiency of national cadres and enable them to occupy jobs in the private sector in the country during the next five years. 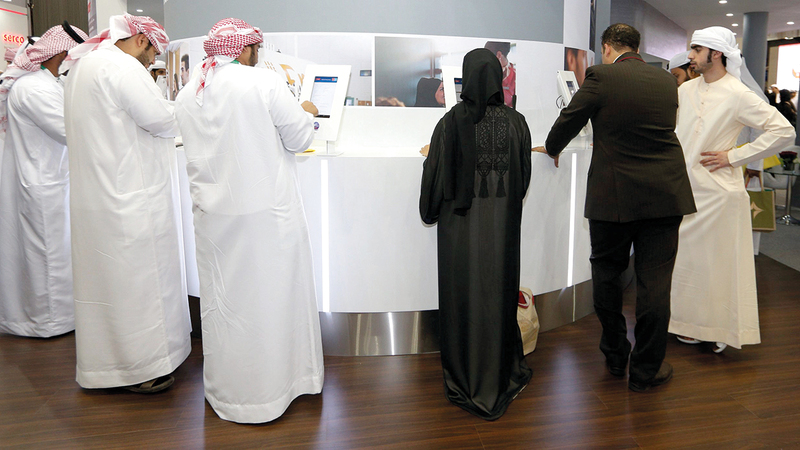 1010 employers offer jobs and training opportunities for citizens on “Nafis”

An employer offering thousands of jobs and training opportunities for national cadres.

A statistic on the extent to which institutions and employers affiliated with the private sector interact with the set of incentives and decisions taken by the state government to encourage enterprises to raise the competitive efficiency of national cadres and enable them to occupy jobs in the private sector in the country during the next five years, showed that the number of companies registered with the government employment platform «Competition». » As partners, it has reached 1,010 employers offering thousands of jobs and training opportunities for national cadres, during the last nine months, since the launch of the National Program for the Employment and Qualification of Emirati Cadres “Nafes” in mid-September last year, until the last third of this month.

The Nafes platform operates under the umbrella of the Emirati Competitiveness Council, which is one of the "50 projects" programs and initiatives aimed at achieving a qualitative leap in the development path in the UAE and developing the national economy system, by supporting the private sector by employing 75,000 citizens over the five years. In the coming years, an average of 15,000 jobs for citizens per year.

According to the statistics conducted by "Emirates Today", the last four months (the beginning of last March until the last half of this June) witnessed a nearly five-fold increase in the number of employers joining the "Nafis Partners" list, as the number of companies registered on the platform increased from 238 entities. He worked last March, to 1010 employers before the end of this month, so that the list of partners includes a large number of international and national companies with multiple branches and diversified activities, specializing in 10 business sectors: “trade, industry, health, construction, economy, tourism, investment, law.” In addition to the technical and professional sectors.

The Emirati Competitiveness Council attributed the huge increase in companies’ registration with the Nafes platform to provide job and training opportunities for citizens, to the remarkable flow that the industrial sector is witnessing in the country from local and foreign investors, as a result of the visions, directives and efforts of the leadership, and the presence of incentives supporting the growth of the industrial sector. He stressed that the Nafes program seeks, as a strategic partner for the private sector, to provide opportunities and conditions for employers to help them empower and develop the Emirati cadre and its joining the private sector, including the industrial field.

The council expected, on its official pages on social media platforms, the increasing growth and prosperity of many private sector establishments, which is a main driver within the wheel of the economic development of the state, based on the legislative environment, the legal system and national programs that encourage the attraction of Emirati competencies, in addition to the system of supporting training and rehabilitation. Emirati competencies in the private sector, and continuing supportive efforts to encourage private sector companies to register and join Nafees, as the main platform for attracting Emirati talents and cadres.

The Emirati Cadres Competitiveness Council stated that the objectives of employing nationals with the partners of the “Nafis” initiative in the private sector are based on several requirements, standards and controls, including the actual number of employees for citizens, and the type of job or training program provided to them, stressing that any company from the private sector can contribute. In Nafes, by sharing job vacancies and training programs, without setting a specific number of jobs that can be offered within one year.

He stated that companies can cooperate with "Nafis" by publishing advertisements for vacant jobs and available training opportunities, and benefiting from the program to support the salaries of Emirati employees and discounts related to pensions.

“Access to a lifetime’s job is not easy... and maintaining it is more difficult,” a practical equation that requires hard effort to pass, which begins with academic diligence, followed by self-professional development, then search, rejection and acceptance, until achieving the desired career dream.

In terms of its societal role, "Emirates Today" seeks, through this page, to share with young people the goal of searching for work, dreams of a lifetime job, and the reality of the state's plan to localize its young cadres in the public and private sectors.