The first words of María del Monte after acknowledging her homosexuality: "Difficult times are running for others and we had to get ahead for them"

"I had nothing planned for anything that happened, I got carried away and spoke with my heart." These have been the first words of María del Monte after making public... 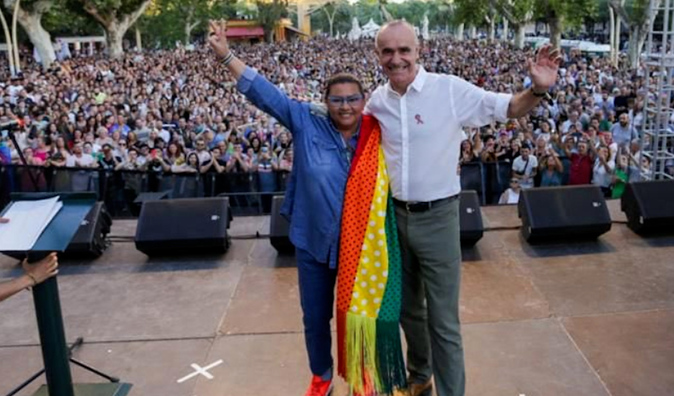 "I had nothing planned

nothing that happened, I let myself go and spoke from the heart". These were the first words of

after making her homosexuality public this Thursday at the proclamation of the gay pride festival in Seville. "I was very impressed to see the Alameda de Sevilla packed, and I was also very impressed to see mothers and fathers supporting their children with a look of pride, we must fight for rights, we must claim them, "he declared after a call from

"I have been lucky to find the love of my life

. I have a family and I have been protecting it for 23 years. But today I want to tell you that I am one of those who are here and that my partner is here," were the words with which María del Monte came out of the closet this Thursday causing the

euphoria and applause of those attending

the party and leaving hundreds of comments on networks.

Last night, on Friday Deluxe, the artist wanted to play down her 'coming out' by stating that she "never" felt "prisoner" of herself.

"I have never hidden anything or hidden myself (...) You could ask me any questions you wanted, but I was free to answer or not (...) What I have not done has been

put a price on love

and over time your vision changes, when you get older you realize that what matters are the people you love (...) If I can help someone fight for their feelings I will be more than satisfied, I have done it because the circumstances have arisen and it seemed like the time to do it, without giving it much importance".

A few words that received the reproach of Jorge Javier Vázquez, who assured him how complicated his interviews were, since the tonadillera could not be asked about his personal life.

Your interviews were complicated

you had not publicly recognized your homosexuality

has come to confirm years of rumor mill regarding her homosexuality that "the Queen of Sevillanas" verbalized, on stage, before a microphone and before hundreds of people, at the Pride party practically coinciding with her 60th birthday and the loss of his mother and two of his brothers due to the coronavirus pandemic.

What María del Monte has wanted to make clear is that she does not want her 'coming out of the closet' to mean a before and after in her privacy.

because of what has happened, I've known who I am all my life but

I'm surprised by the impact

my heart has spoken

, period, who wants to understand it well and who doesn't, well no, it wouldn't be good if I were talking all the time now day of this, that would mean that it has not served for anything, the time has come to talk about love, respect and equality, simply, "he added.

As he has assured, what he hopes now is that his words can help others: "I want that day -the Pride- to be to celebrate and not to vindicate, I did not even say the name of my partner out of respect for her, not because I'm hiding, and having told it I hope it doesn't mean that she loses her freedom. I haven't had any traumas or problems, I've had a happy childhood in that regard, but times are hard

for others and had to

get ahead for them, if with my words I have made someone feel free to love I will be satisfied".