Biden: This ruling sets America back 150 years! Britain, France and other countries have also spoken out

China News Service, June 25th, a comprehensive report, the US Supreme Court on the 24th overturned the precedent "Roe v. Wade" that established the right to abortion, which means that women's right to abortion will no longer be protected by the US Constitution. According to reports, 22 states in the United States are preparing to restrict women's abortion rights under existing laws or constituti 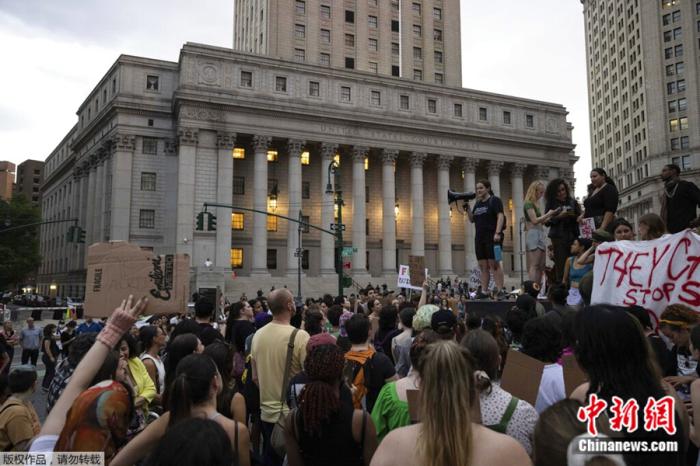 China News Service, June 25th, a comprehensive report, the US Supreme Court on the 24th overturned the precedent "Roe v. Wade" that established the right to abortion, which means that women's right to abortion will no longer be protected by the US Constitution.

According to reports, 22 states in the United States are preparing to restrict women's abortion rights under existing laws or constitutional amendments.

After the news came out, it caused strong repercussions in the United States and the international community.

U.S. President Biden, House Speaker Nancy Pelosi, United Nations Secretary-General Spokesperson Dijarric, and leaders of the United Kingdom, France, Canada and other countries have all spoken out on the matter.

Biden slammed the Supreme Court for making a "tragic mistake" that set America back 150 years.

On June 24, local time, the American people held protests after the Supreme Court of the United States overturned the precedent "Roe v. Wade" that established the right to abortion.

In 1973, the U.S. Supreme Court ruled in Roe v. Wade, affirming that the U.S. Constitution protects women's freedom to have an abortion.

However, anti-abortion activists and groups have sought to overturn the precedent.

In May 2022, a draft preliminary opinion leaked by the U.S. Supreme Court indicated that the Supreme Court may overturn Roe v. Wade.

The leak of the draft bill sparked days of demonstrations in several U.S. cities, with pro- and anti-abortion groups even gathering outside the Supreme Court in protest and solidarity.

On June 24, the U.S. Supreme Court ruled, formally overturning the "Roe v. Wade" case, which means the end of the constitutional protection of the right to abortion.

In the ruling, conservative Justice Samuel Alito argued that Roe v. Wade was a weak argument and had damaging consequences.

"Instead of addressing the issue of abortion, this case has fueled debate and deepened divisions," he wrote.

The liberal justices said in dissenting opinion that with the overturn of Roe v. Wade, millions of American women lost a basic constitutional protection.

The U.S. Supreme Court ruling did not make abortion illegal, but states can now take action to ban abortion because abortion is no longer considered a constitutional right, the analysis said.

The Associated Press also pointed out that this result may lead to about half of the US states or will ban abortion.

According to Reuters, after the overturn of the "Roe v. Wade" case, 22 states in the United States are preparing to restrict women's abortion rights under existing laws or constitutional amendments.

Among them, South Dakota, Louisiana and Kentucky have developed "trigger bills", and once the "Roe v. Wade case" is overturned, the "abortion ban" will take effect immediately.

Penalties in those states range from felony charges to fines of up to $100,000 and up to 10 years in prison for those who try to help a woman get an abortion.

In addition, seven states including Texas and Tennessee will automatically take effect "abortion bans" within 30 days after the "Roe v. Wade case" is overturned.

Strong response from the international community

A stone stirred up a thousand waves.

On June 24, local time, US President Biden delivered a speech at the White House.

U.S. President Biden on the 24th angrily denounced the Supreme Court for making a "tragic mistake" that set the United States back 150 years.

"This is a sad day for the court and for the country," he said. Biden also said the Supreme Court's ruling today was not final, and he called on Congress to act to protect women's abortion rights.

"Today, the Republican-controlled Supreme Court has achieved their dark, extreme goal of denying women the right to make their own reproductive health decisions," she said.

Obama said the Supreme Court "relegated the most personal decision a man could make to the whim of politicians and theorists, attacking women's fundamental freedoms." broken".

U.N. Secretary-General Spokesman Djarric said restrictions on abortion will not stop people from pursuing it, but will only make it more dangerous.

He said that the United Nations has repeatedly reiterated that reproductive rights are an integral part of women's rights as well as human rights, a principle supported by international agreements and reflected to varying degrees in laws in many parts of the world.

In addition, the leaders of some countries in the Americas and Europe also expressed their views on this ruling:

- Canadian Prime Minister Justin Trudeau said the U.S. Supreme Court's overturning of an abortion precedent was a "terrible" development that threatened women's right to choose what to do with their bodies;

- British Prime Minister Johnson said that the US Supreme Court overturned the constitutional right to abortion, which is "a big step backward" and will affect the world's views on this issue;

- French President Emmanuel Macron expressed regret that American women's right to abortion is no longer protected by the Constitution, emphasizing that "abortion is a fundamental right of all women."

"Women's abortion must be protected, and my solidarity with abortion rights supporters," he tweeted;

- Belgian Prime Minister De Crowe said on Twitter that he is very concerned about the ruling and the signal it sends to the world;

In addition, Reuters reported that Disney, Goldman Sachs Group, Bank of America, JPMorgan Chase, Alaska Airlines, Deutsche Bank, Facebook parent company Meta and other companies issued a statement saying that they will reimburse their employees for abortions outside the state they live in. travel costs.

On June 24, local time, the American people held protests after the Supreme Court of the United States overturned the precedent "Roe v. Wade" that established the right to abortion.

According to another CNN report, after the news that the U.S. Supreme Court overturned the "Roe v. Wade case" came out, protests broke out in many parts of the United States, and people took to the streets with signs.

Anti-abortion crowds gathered in front of the Supreme Court, chanting slogans, and the US government dispatched riot police to prevent violence.

The report also said that at least 70 protests were already gathering momentum.

Amid overwhelming opposition, however, former Republican President Donald Trump applauded the Supreme Court's ruling and took credit for the result.

Because it was he who sent three conservative justices to the Supreme Court during his tenure.