“You can expect any provocation”: how the situation with the export of Ukrainian grain is developing

Western countries are artificially fanning a hysteria about stopping the transportation of Ukrainian grain through the Black Sea ports, since Russia does not create obstacles to this, President Vladimir Putin said. According to him, Moscow and the UN Secretariat have an understanding on this issue, but Kyiv lacks a constructive approach to solve the problem. At the same time, Ukrainian Foreign Minister Dmitry Kuleba said that so far none of the countries has indicated their readiness to send warships to escort grain. At the same time, he called for ensuring the security of trade routes in the Black Sea through an "international operation under the auspices of the UN." Experts note that the possible involvement of the Western Navy in ensuring the export of grain from the territory of Ukraine is fraught with undesirable incidents, 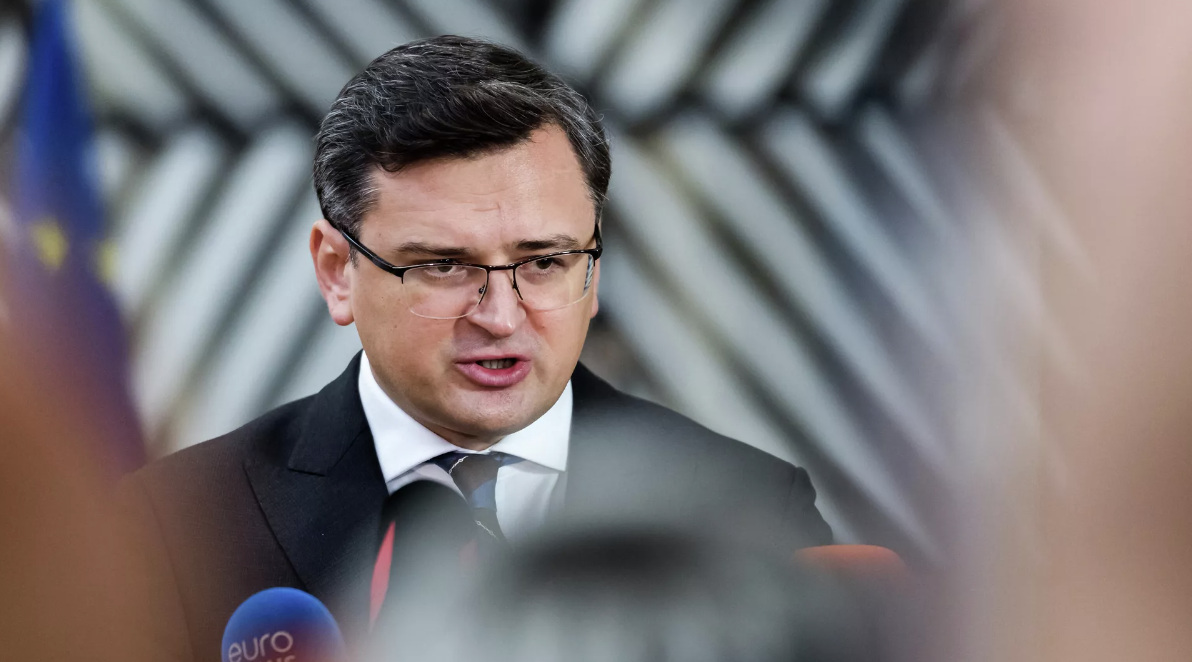 Western states artificially create hysteria around the export of grain from the territory of Ukraine in a situation where Russia does not interfere with this process, said President Vladimir Putin, speaking on Friday, June 24, at a meeting of the BRICS + format.

“Some Western countries, destabilizing the global production of agricultural products, approach issues of this kind with cynicism, imposing restrictions, for example, on the supply of Russian and Belarusian fertilizers, making it difficult to export Russian grain to world markets... bank payments under trade contracts and so on.

At the same time, hysteria is being artificially inflated over the termination of the transportation of, say, Ukrainian grain through the Black Sea ports, ”the Russian leader stated.

“I have publicly stated many times, I want to emphasize once again that Russia does not prevent the export of Ukrainian grain from the territory of this country and is ready to ensure the free passage of ships with grain into international waters, if, of course, the Ukrainian military clears the ports of shipment and the nearby water area,” Putin said.

He stressed that Moscow has a corresponding understanding with representatives of the UN Secretariat, but lacks a constructive approach on the part of the Kyiv authorities.

The President added that Russia remains a responsible participant in the global food market and is ready to fulfill its contractual obligations in good faith.

“Mines are not an obstacle to export”

Meanwhile, in Kyiv, they complained that not a single country has yet expressed its readiness to provide its warships to escort cargoes with Ukrainian grain in the Black Sea.

Such a statement was made on June 23 by Ukrainian Foreign Minister Dmitry Kuleba at a briefing organized by the US State Department on food security in Africa.

“We do not have confirmation from any states that they are ready to send their warships to participate in this operation,” he said.

At the same time, Kuleba said that the relevant negotiations are ongoing.

The minister assured that the country's authorities consider it extremely important to ensure safe passage to the port of Odessa for ships transporting Ukrainian agricultural products.

At the same time, the minister answered negatively to the question of one of the journalists whether the Ukrainian authorities are making efforts to clear mines from their ports.

According to him, the mines are necessary for Ukraine to protect against Russia and supposedly do not prevent the establishment of maritime transportation of grain.

“Mines do not create a hitch.

This is not an obstacle to the export of Ukrainian agricultural products around the world.

The real problem is what will happen when the bay is cleared of mines, ”says the head of the Foreign Ministry.

One of the options for ensuring the safe export of grain from Ukraine, he called the holding of "an international operation under the auspices of the UN."

The minister suggested that a "coalition of interested countries" could join it, which would send their fleet to ensure the passage of merchant ships.

Also on Friday, US Secretary of State Anthony Blinken, during a joint press conference with German Foreign Minister Annalena Burbock, assured that Washington intends to continue working on the issue of exporting grain from Ukraine.

“We are working together to be able to export as much grain as possible from the territory of Ukraine,” the diplomat said, adding that food security remains a serious global problem.

Earlier, the German Foreign Minister accused Russia of using the famine "as a weapon."

In Moscow, these accusations were called "an illiterate and cynical lie."

“Using hunger as a weapon is just in the historical traditions of Germany,” Russian Foreign Ministry spokeswoman Maria Zakharova wrote on her Telegram channel, pointing out that since the beginning of 2022, Germany has actually doubled its imports of agricultural goods, “strongly buying surpluses from the world food market."

“As far as international waters are concerned, the Russian Federation guarantees the safety of the delivery of these ships to the Bosphorus,” the minister said.

Lavrov also did not disregard the attempts of Kyiv and its Western partners to organize some kind of international coalition.

In his opinion, all of them are aimed at interfering in the affairs of the Black Sea region under the auspices of the UN.

The head of Russian diplomacy stressed that Kyiv's reluctance to get rid of mines in its ports complicates the efforts undertaken by Turkey and UN Secretary General António Guterres.

In turn, the press secretary of the President of Russia Dmitry Peskov on June 23, answering a relevant question, denied accusations against the Russian Federation of “stealing” grain.

At the same time, earlier and at the UN level, they acknowledged the absence of data on any illegal actions on the part of Moscow in this regard.

In addition, on June 24, Russian Deputy Foreign Minister Sergei Vershinin, during a meeting with EU Ambassador to Moscow Markus Ederer, also stated that Russia was not involved in interruptions in grain supplies.

“The Russian side gave reasoned explanations of the reasons for the aggravation of problems in the food sector ... The EU representative was pointed out the inadmissibility of the propaganda campaign conducted by the West to hold Russia responsible for interruptions in the supply of grain and fertilizers to world markets,” the Russian diplomatic mission said in a statement. departments.

Looking for a way out

The problem of exporting Ukrainian grain in recent weeks has become one of the topics discussed in the West.

Representatives of the US and EU countries continue to accuse Russia of preventing its export by sea.

However, as Vladimir Putin recalled in an interview with the Rossiya 1 TV channel in early June, there are many ways to export grain from Ukraine.

According to him, this can be done both by sea from the ports of Odessa, Berdyansk and Mariupol, and by land - through Romania, Hungary, Poland or Belarus, if Western sanctions are lifted from the latter.

Turkey took an active position in resolving the grain problem.

According to local media, under the leadership of the Minister of Defense of the country, Hulusi Akar, an open channel of communication has been formed to study this problem, and intensive negotiations are underway with both Russia and Ukraine.

In particular, a Turkish delegation from the Ministry of Defense visited Moscow on June 21 to discuss this issue.

As emphasized in the Turkish military department in a commentary to RIA Novosti, the meeting was held "in a constructive and very positive atmosphere."

The United States recently informed about close cooperation with the European Union on the issue of expanding access to land routes for the export of grain.

“I must say, we are considering various ways to help Ukraine (solve. -

) ... logistical problems that prevent the export of Ukrainian grain,” Ramin Tolui, Assistant Secretary of State for Economic and Business Affairs, said at a briefing.

The need to develop alternative permanent routes for the export of grain was also indicated in Germany.

“In the issue of grain exports by land, we are no longer talking only about some temporary alternative ... Since the issue of ensuring the security of Ukrainian grain exports is a global task, the EU, the USA, and above all business as well, must act together,” German Minister of Food and Agriculture Cem Ozdemir said in an interview with Der Tagesspiegel.

According to experts, Western politicians are still limited to talking about the need to export grain from Ukraine directly by Kyiv, fearing possible provocations due to which other countries could potentially be involved in the current conflict.

This is especially true of the sea route, Vladimir Bruter, an expert at the International Institute for Humanitarian and Political Studies, emphasized in an interview with RT.

“You can expect any provocation.

The Black Sea is an inland water area, and the presence of foreign ships there is absolutely unnecessary and may be fraught with undesirable consequences.

If Ukraine wants to export grain through Odessa, then let it clear this route, no one bothers it,” Bruter explained.

Vladimir Shapovalov, deputy director of the Institute of History and Politics of the Moscow State Pedagogical University, shares this point of view.

In a conversation with RT, he stressed that any actions of Western countries, even in such a humanitarian issue, which will be accompanied by the involvement of their military forces, will mean their actual direct intervention in the conflict.

“The same principle applies here as to the requirements of Kyiv to close the sky over Ukraine, which Western countries outlined at the very beginning of the special operation of the Russian Federation.

Any involvement of foreign navies is fraught with the risk of being directly involved in hostilities, which the West categorically does not want.

This explains the unwillingness of Kyiv's allies to send their warships to the Black Sea," Shapovalov explained.

Vladimir Bruter also stressed that the presence of Western warships is unacceptable in the zone of the special operation.

“If the Russian Federation allows warships of other countries to pass, this can turn into all sorts of problems and adverse consequences.

For example, a Western ship could be blown up by a Ukrainian mine, and Russia will be blamed for this.

Therefore, Moscow should not agree to any initiatives to create coalitions, even under the auspices of the UN, ”the expert concluded.