Theyab bin Mohamed bin Zayed reviews the progress of the "Etihad Train" and witnesses the signing of an agreement worth 1.2 billion dirhams

H.H. Sheikh Theyab bin Mohamed bin Zayed Al Nahyan, Chief of the Abu Dhabi Crown Prince's Court and Chairman of the Board of Directors of Etihad Rail, paid an inspection visit to review the latest package of the second phase of the UAE national railway network project, which extends over a distance of 145 km 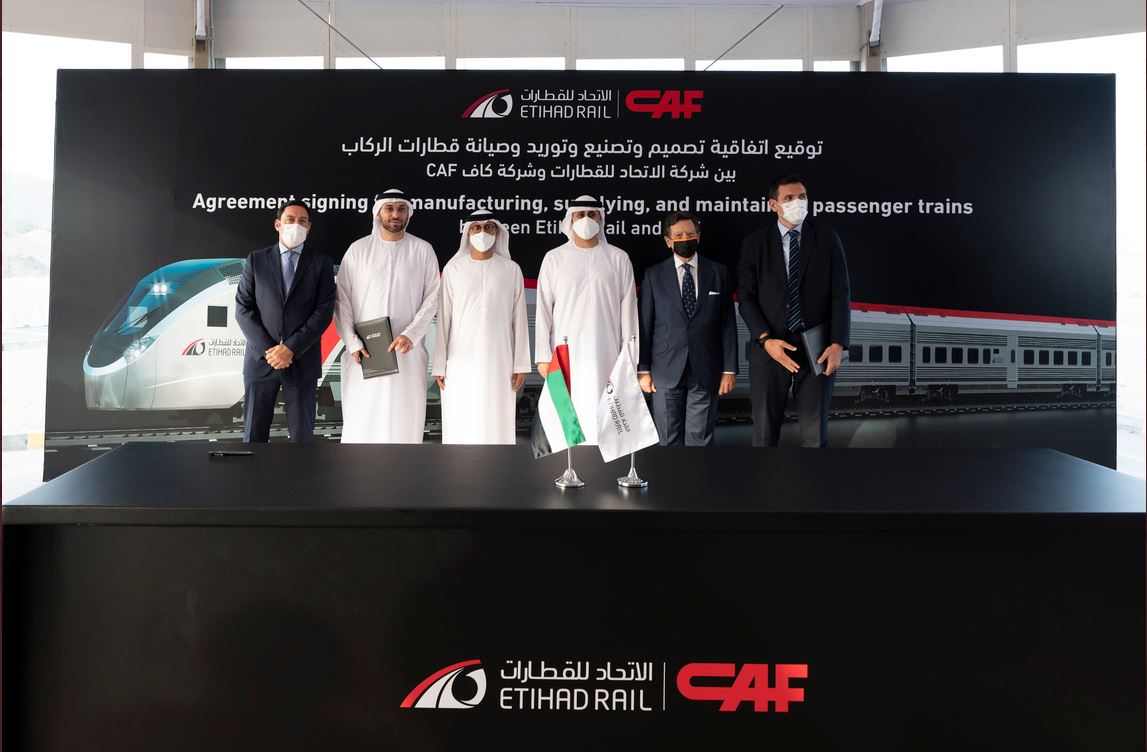 Theyab bin Mohamed bin Zayed reviews the progress of the "Etihad Train" and witnesses the signing of an agreement worth 1.2 billion dirhams

H.H. Sheikh Theyab bin Mohamed bin Zayed Al Nahyan, Chief of the Abu Dhabi Crown Prince's Court, and Chairman of the Board of Directors of Etihad Rail, paid an inspection visit to review the latest package of the second phase of the UAE national railway network project, which extends 145 km from the Emirate of Sharjah. All the way to the port of Fujairah and Ras Al Khaimah.

During the visit, which started from the Al-Suyoh area in Sharjah to the Sukum area in Fujairah, His Highness inspected several major landmarks of the project along its path in the last package of the second phase of the project, starting with the railway bridge in the Al-Suyuh area in Sharjah, then heading to the Al-Bithnah area In Fujairah to visit the Al-Bithnah Bridge, and then go to see the works of laying railway tracks in a number of tunnels that make their way through the Hajar Mountains in Fujairah.

His Highness Sheikh Theyab bin Mohamed bin Zayed Al Nahyan stressed that this ambitious national project has witnessed, over the past years, vigorous follow-up and sound directives from His Highness Sheikh Mohamed bin Zayed Al Nahyan, President of the State, and today Etihad Rail renews its commitment to continue working to achieve more successes and build on The foundations and pillars laid by the wise leadership of the state to move towards developing the transport system and achieving new stages of economic prosperity and progress, through the development of the national railway network project and enhancing its contribution to the comprehensive development of the state, to demonstrate today the effectiveness of its role in reshaping the features of the sector and determining business models and customer behavior, Through its continuous achievements to enhance its contribution to shaping the future of the transport sector to serve the pioneering path of the UAE.

After the inspection tour ended, His Highness Sheikh Theyab bin Mohammed bin Zayed Al Nahyan and Minister of Energy and Infrastructure Suhail bin Mohammed Faraj Faris Al Mazrouei witnessed the signing of an agreement between Etihad Rail and the Spanish company CAF, one of the world's leading companies in the railway sector, to design, manufacture and supply And maintenance of passenger trains for the "Etihad Train" project, at a value of 1.2 billion dirhams.

His Highness Sheikh Theyab bin Mohamed bin Zayed Al Nahyan praised the agreement, which comes within the framework of Etihad Rail's efforts to develop passenger transport services and reflects its continuous keenness to continue developing the national and strategic project "Etihad Train" in accordance with the best standards, practices and approved time plans.

The agreement, which was the result of the company's success at the Middle East Rail Conference 2022, was signed by His Excellency Shadi Malak, CEO of Etihad Rail, and Jozo Imaz, CEO of the train fleet of the Spanish company CAF, in the presence of Alvarez Barthe D.

Antonio, Ambassador of the Kingdom of Spain to the UAE, in addition to a number of officials from both sides.

Under the agreement - which was signed at the construction site of the first passenger train station in the city center of Fujairah in the Skmkum region - the Spanish company CAF is scheduled to design, manufacture, supply and maintain passenger trains according to designs that comply with approved European standards, where one train can accommodate more than 400 passengers, Its speed reaches 200 kilometers per hour.. All passenger trains will provide different levels of seats, which represents a qualitative addition to the system of public transport solutions at the level of the UAE.

Passenger rail services, one of the three strategic projects within the framework of the National Railways Program, will facilitate the public transport system in the country and enhance the standards of life and well-being of the population while ensuring the best internationally approved security and safety practices, as the passenger train will contribute to facilitating the movement of transportation in the country. Between different cities quickly, efficiently, with high degrees of security, convenience and at an affordable cost.

The Spanish company CAF is one of the international companies with extensive experience in the railway sector and passenger transport services for more than 100 years, during which it has worked to develop advanced solutions to enhance the passenger experience of traveling by train and provide them with high levels of safety, efficiency and quality.

The passenger train will connect 11 cities and regions in the country with goods for Fujairah, including Ruwais, Al Mirfa, Dubai, Sharjah, Al Dhaid and Abu Dhabi. Passenger transportation services will enable travelers to plan their trips between the emirates and cities of the country more efficiently, starting from booking tickets to their final destinations and will help them save money Travel time ranges between 30% to 40% compared to other means of land transportation, as it will take only 50 minutes to travel from Abu Dhabi to Dubai by train, and from Dubai to Fujairah only 50 minutes, and from Abu Dhabi to Ruwais only 70 minutes, and from Abu Dhabi to Fujairah 100 one minute.

Passenger trains will be equipped with the latest and most advanced technologies in line with the environment and climate of the UAE, to ensure high levels of performance, efficiency and reliability. They will also have all amenities, entertainment and comfortable seats so that passengers can enjoy an exceptional travel trip. The trains will also be equipped with all modern amenities, including It has infotainment systems, charging stations, etc., as well as food and beverages, and a large seating area;

In addition to being equipped with highly advanced air conditioning systems, in order to meet the needs of all citizens, residents and visitors with different categories and aspirations, as it will provide different classes of seats, including first class, business class or economy class seats.

It is worth noting that Etihad Rail recently signed three memoranda of understanding with the Spanish national railway company "Renfe" and the two British companies, "High Speed ​​One" and "GB Rail Variety", with the aim of enhancing ways of cooperation, exchanging knowledge, experiences and best practices in the fields of railway services and operations. Operational services for freight and passenger trains, during the activities of the Middle East Railway Conference 2022, which the company hosted last May.

And last February, Etihad Rail signed an agreement with the First Abu Dhabi Bank to finance the railway services project to transport passengers at a value of 1.990 billion dirhams, as part of the national railway program for the UAE. Under the agreement, First Abu Dhabi Bank will act as the main approved organizer of the loan.

The route of the last package of the second phase of the "Etihad Train" project extends for a distance of 145 km, linking the borders of the Emirate of Dubai and Sharjah, passing through the Emirate of Fujairah to Ras Al Khaimah, and includes 54 bridges and 20 animal crossings. It also includes the construction of 9 tunnels that make their way in the Hajar Mountains on A distance of 6.9 km, including the longest railway tunnel for heavy loads in the Arabian Gulf region with a length of 1.8 km.. This route has the advantage of being in one of the most difficult geographical areas due to the mountainous terrain surrounding it.

In November 2021, the company had announced the completion of digging all railway tunnels on this track, two months ahead of schedule and according to the highest standards of safety and sustainability, using the latest tunnel boring machines and the best modern technologies, which is a qualitative addition to the project’s safety record. .

The national railway network supports the growth of the national economy with an environmentally friendly transportation system that is efficient, sustainable, safe and cost-effective. The network uses locomotives equipped with the latest technology to reduce emissions, as the carbon emissions that result from transport by train are 70-80% lower than the carbon emissions generated by Trucks of the same quantity, each train journey is equivalent to a load of 300 trucks.

Etihad Rail adopts international best practices and continuously conducts Environmental Impact Assessments (EIAs) studies to reduce the impact of the UAE national railway network on the environment during its planning, construction and operations.