The high temperature has set a record, and hundreds of millions of Americans have been "baked"! The map is red (picture)

China News Service, June 23 (Reporter Meng Xiangjun) This is only the first day of the official summer, but as the heat wave continues for several weeks, more than 100 million Americans are experiencing high temperature "baking", American media pointed out.   Many places in the United States have matched the highest summer temperatures in the past 10 years, or even nearly half a century. As you 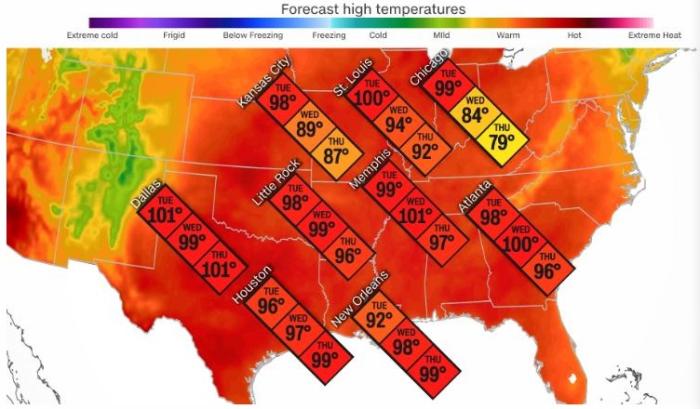 China News Service, June 23 (Reporter Meng Xiangjun) This is only the first day of the official summer, but as the heat wave continues for several weeks, more than 100 million Americans are experiencing high temperature "baking", American media pointed out.

Many places in the United States have matched the highest summer temperatures in the past 10 years, or even nearly half a century.

Data map: Children play by the fountain pool to cool off in Washington, USA.

The NWS said the heat wave will move eastward to the Gulf Coast and Midwest, and spread to the Great Lakes and the eastern Carolinas.

Forecast firm AccuWeather warned of "severe warming" in more parts of the U.S. as the air moves north.

【Pizza baked in the car】

The number of people hospitalized for heatstroke across the United States has grown rapidly.

Many drank iced drinks to cool off, soaked in swimming pools or went to the open beach to cool off, while more retreated to air-conditioned rooms.

Under these weather conditions, even if the new crown epidemic is still very serious, many Americans can no longer guarantee that they can wear masks outdoors at all times.

Data map: A man leads a puppy to the pool to cool down in Manhattan, New York, USA.

In Arizona, Brown, a netizen in Phoenix, showed how to grill pizza, burgers and steaks on the dashboard of a car.

The thermometer showed that the temperature inside his car reached a staggering 200 degrees Fahrenheit (about 93.3 degrees Celsius), or even higher.

【Many people died due to the heat】

The US media reminded that extreme heat may be harmful to health, in addition to outdoor workers, it will especially affect the elderly, children and people with chronic diseases or mental problems.

High temperatures lead to high ground-level ozone levels, which can make breathing difficult for people with asthma or other respiratory conditions.

In addition, a number of US media reported that a 5-year-old boy was left in the car for several hours while his mother was preparing for a birthday party, and unfortunately died due to the high temperature.

The National Weather Service reminds that children, pets, etc. should not be left in unattended vehicles under any circumstances, whether it is hot weather or not.

In a closed car in summer, lethal temperatures can be reached in minutes.

Data map: A man escapes the heat in an emergency shelter in Portland, Oregon, USA.

According to the Associated Press, about 1,500 people in the United States die each year from extreme heat, about half of them homeless.

Hot weather has killed more people in the United States than hurricanes, floods and tornadoes combined.

Three of them were homeless and a fourth was forced to choose between skyrocketing electricity bills and food costs.

Climate scientists warn that vulnerable groups, especially the homeless, are 200 times more likely to die from heat than those with shelter.

[There is not enough electricity, and the water is also cut off]

"Never have we seen a power shortage of this magnitude," said the large regional grid operator in the United States.

Entergy, which serves some U.S. states, said it expects unprecedented levels of energy use this week.

Earlier, the US electricity regulator NERC had warned that extreme weather and other environmental factors could lead to grid failures in many places.

As the heatwave continues, more parts of the United States will face power shortages and may have to "rotate blackouts" at that time.

Not only that, but for the 165,000 residents of Odessa, Texas, they had to endure water outages under a heat wave of more than 30 degrees after a local main water main ruptured.

"The timing of this water pipe rupture couldn't have been worse," MSNBC said.

[The climate is "chaotic"]

The park is known for the yucca, the drought-tolerant Joshua tree, which can live up to 300 years.

But the rising incidence of wildfires caused by climate warming frequently threatens its survival.

It is predicted that this plant may be endangered by the end of the 21st century if humans fail to save it effectively.

On June 10, local time, the water level in Lake Mead, Nevada, USA dropped to its lowest level in 80 years, and a previously sunk boat was exposed.

According to the geological survey, under the influence of high temperature, the number of glaciers in this park has been reduced to 25, and the ice melting speed is amazing, and the "countdown" of comprehensive ice melting has started.

A warming climate is causing sea levels to rise and the groundwater in this park in southern Florida is salinating, threatening the survival of native tropical orchids and wildlife.

From wildfires, droughts to winds, the park has lost thousands of giant sequoias over the years.

Temperatures will remain above normal in much of the country through the end of June, meteorologists said.

Soaring temperatures will dry out grass and trees, while some scientists warn that the United States could see more frequent and extreme heat in the future.

Statistically, heat waves have become more frequent, warmer and longer-lasting than in past decades.

It's been a tough summer in America!