Just after the summer solstice, China's most important home diplomatic event this year, the BRICS meeting, kicked off. Against the current special historical background, the international community is highly concerned about what results and voices will be produced at this meeting.   During the meeting, President Xi Jinping will attend three important events in succession. The first one will be 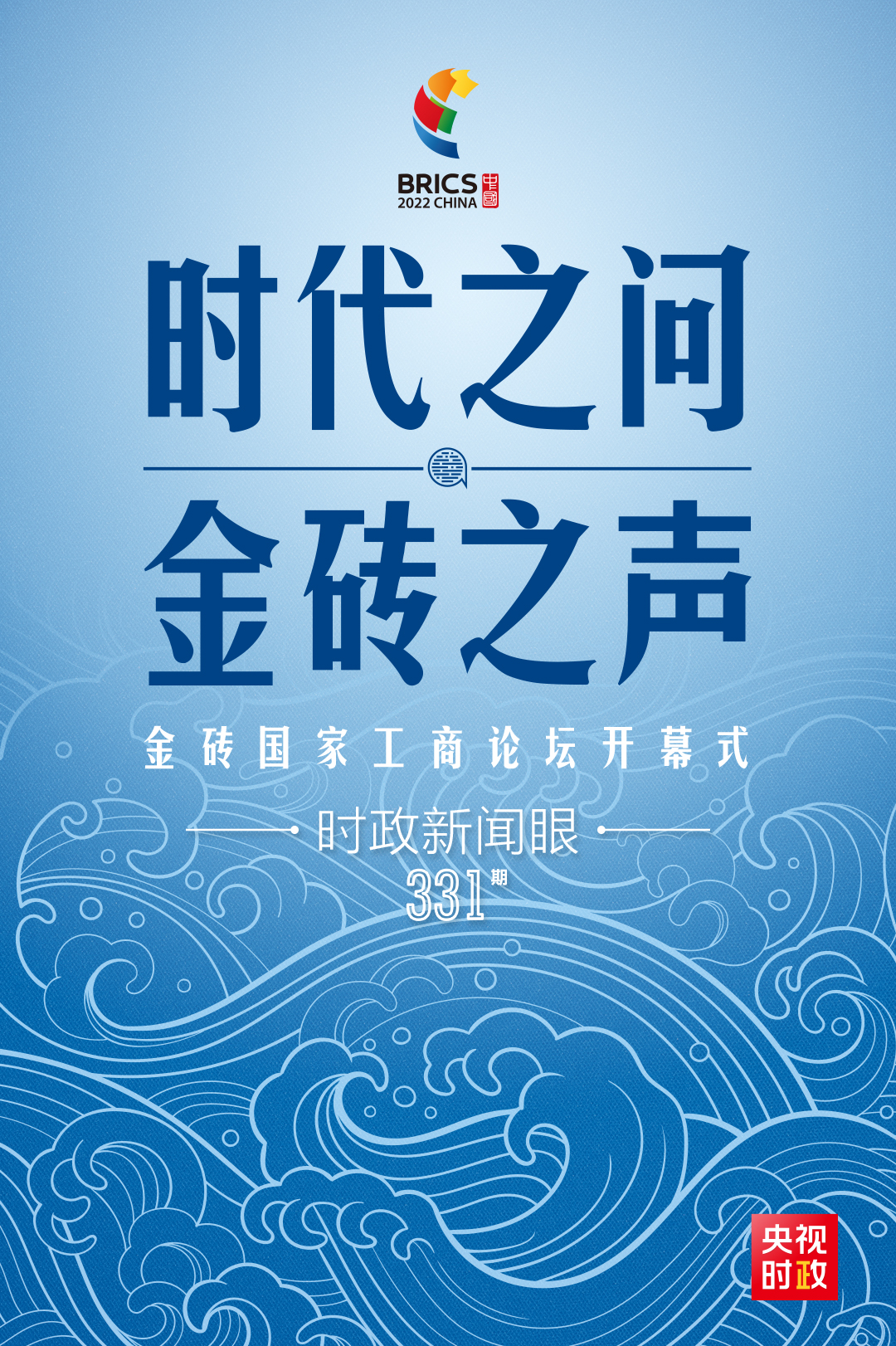 Just after the summer solstice, China's most important home diplomatic event this year, the BRICS meeting, kicked off.

Against the current special historical background, the international community is highly concerned about what results and voices will be produced at this meeting.

During the meeting, President Xi Jinping will attend three important events in succession. The first one will be held on the evening of June 22. He will attend the opening ceremony of the BRICS Business Forum by video and deliver a keynote speech.

This is the fourth time that President Xi Jinping has attended the BRICS Business Forum.

Previously, he attended the event for three consecutive years, in Xiamen, China in September 2017, Johannesburg, South Africa in July 2018, and Brasilia, the capital of Brazil, in November 2019.

In 2009, during the first meeting of BRICS leaders, a proposal was put forward to hold a business forum.

Since then, as an important supporting event of the BRICS meeting, the Business Forum has been held in turns in the five countries.

△The 2022 BRICS Business Forum will be held at the Diaoyutai State Guesthouse in Beijing.

The business forum is usually held before the BRICS leaders' meeting.

During the Xiamen meeting in 2017, President Xi explained: "The business forum is scheduled to be held on the eve of the leaders' meeting, in order to listen to the opinions and suggestions of the business community, and jointly make the Xiamen meeting a success and build the BRICS cooperation. "

△ This is the venue before the forum starts.

After a lapse of five years, China once again hosted the BRICS meeting as the presidency.

This year, the BRICS Business Forum will be held online and offline.

"Current Affairs News Eye" found that the logo of this year's BRICS meeting continued the style of the 2017 Xiamen meeting. The concept of sustainable development.

△ The five colors of the main picture represent the five BRICS countries, symbolizing the unity and cooperation of the five countries and helping each other in the same boat.

The advent of the times, the worries of the world

On the evening of June 22, President Xi Jinping delivered a keynote speech at the opening ceremony of the BRICS Business Forum on the theme of "Grasping the Trend of the Times and Creating a Bright Future".

At the beginning of the chapter, President Xi put forward a big proposition - "Where is the world going? Peace or war? Development or decline? Open or closed? Cooperation or confrontation? This is the question of the times before us."

In a video conference of the World Economic Forum in January this year, President Xi pointed out: "The world today is undergoing a profound change unseen in a century. This change is not limited to a momentary event, a country or a region, but a profound and grand change of the times. ."

Three months later, he pointed out at the opening ceremony of the Boao Forum for Asia Annual Conference 2022: "At present, the changes in the world, the times, and the history are unfolding in an unprecedented way, posing challenges to mankind that must be taken seriously. "

In this speech, as a statesman with profound insight into the current world situation, President Xi expressed his general concerns with the international community.

Worries of war: "This Ukraine crisis has once again sounded the alarm for the world: superstition of power status, expansion of military alliances, and the pursuit of one's own security at the expense of the security of other countries will inevitably lead to a security dilemma."

Recession fears: "The global poverty reduction gains of the past few decades could be undone."

Worry about closure: "Everyone is worried that the world economy will fall into the quagmire of crisis."

Worry about confrontation: "The international community is generally worried that if this continues, the world economy will inevitably be divided into isolated regions."

The more critical the moment, the more complicated the situation, the more we must remain sober and calm.

△South African President Ramaphosa attended the opening ceremony of the forum and delivered a speech.

Facing the "question of the times", President Xi Jinping delivered a sonorous and powerful "BRICS voice" in his speech.

He put forward four propositions: First, we must unite and cooperate to jointly maintain world peace and stability.

Second, we should help each other and jointly promote global sustainable development.

Third, we must help each other to achieve win-win cooperation.

Fourth, we must be inclusive and work together to expand openness and integration.

Regarding peace, President Xi talked about the catastrophe of the two world wars and the gloom of the Cold War confrontation.

He pointed out that the tragic history shows that hegemonism, bloc politics, and camp confrontation will not bring peace and security, but will only lead to war and conflict.

△Brazil President Jair Bolsonaro attended the opening ceremony of the forum and delivered a speech.

In April this year, President Xi first proposed a global security initiative at the opening ceremony of the Boao Forum for Asia Annual Conference 2022.

At the opening ceremony of this business forum, he reiterated the "six insistences" of the Global Security Initiative.

In his speech, President Xi talked about the Ukraine crisis as a wake-up call to the world once again.

He pointed out that in the face of a turbulent world, we must not forget the original intention of the UN Charter and keep in mind the mission of safeguarding peace.

In 2015, the United Nations Development Summit adopted the 2030 Agenda for Sustainable Development.

Today, the implementation of the agenda is nearly halfway through, but development issues are increasingly marginalized from the international agenda, and it is not optimistic to achieve the SDGs on schedule.

△ Russian President Vladimir Putin attended the opening ceremony of the forum and delivered a speech.

Development is an important theme of this year's BRICS meeting.

"Take the hearts of the people as the heart, and the interests of the world for the benefit of the world." From the global development initiative to the global security initiative, it reflects President Xi Jinping's world sentiment of providing Chinese solutions and public goods for solving the development deficit and the peace deficit.

The spirit of BRICS is vigorously carried forward

In the speech on the 22nd, "peace" and "development" were the keywords of the first two points, while the latter two points pointed to "cooperation" and "openness".

President Xi Jinping pointed out that we must work together to achieve win-win cooperation; we must be inclusive and open up and integrate together.

These two propositions demonstrate the BRICS spirit of "openness, inclusiveness, and win-win cooperation", and are also a powerful response to some "adverse winds and currents."

Talking about win-win cooperation, President Xi pointed out that at this critical moment, only by sticking to solidarity and cooperation can we overcome the economic crisis.

We must think in one direction and work hard in one direction, strengthen macroeconomic policy coordination, and prevent the slowdown or even interruption of the global recovery process.

△The 2022 BRICS Business Forum has also set up 5 special seminar topics, which are the sub-venues for the special seminar themed "Unity to meet challenges and expand health cooperation under the epidemic".

In April this year, President Xi used the analogy of "machines and parts" at the Boao Forum for Asia to refute some bad practices: "The international community has developed into a complex, delicate and organic machine. Making the whole machine work is going to be a serious problem, and the people who are demolished will be damaged, and so will the people who are demolished.”

In his speech at the opening ceremony of the Business Forum, President Xi used another metaphor: "It has been proven time and time again that sanctions are a 'boomerang' and a 'double-edged sword', politicizing, instrumentalizing, and weaponizing the world economy, using international financial The arbitrary sanctions imposed by the dominance of the monetary system will ultimately harm others and bring harm to the people of the world.”

Speaking of openness and inclusiveness, President Xi said that economic globalization has encountered "headwinds and currents" for some time.

Some countries want to implement "decoupling and breaking the chain" and build a "small courtyard with high walls".

He pointed out, "Economic globalization is an objective requirement for the development of productive forces and an irresistible historical trend. Going backwards in history and trying to block other people's way will only block your own way in the end."

"Mount Tai does not allow soil, so it can be great; rivers and seas do not choose trickles, so they can be deep." President Xi quoted Qin Dynasty statesman Li Si's book "Remonstrance to Chasing Guests", emphasizing "to be inclusive, inclusive, Mutual benefit and win-win results are the right path in the world.”

In his speech that night, he encouraged entrepreneurs to be promoters of open development, leaders of innovative development, and practitioners of shared development, so as to fuel BRICS cooperation.

On June 23, President Xi will preside over the 14th BRICS Leaders' Meeting and deliver an important speech.

"Current Affairs News Eye" will continue to interpret the "Voice of BRICS" for you.