Tunisia.. A demonstration by the Salvation Front in the center of the capital, and Najib Chebbi confirms: We have two options: comprehensive dialogue or ruin &nbsp;&nbsp;

The head of the opposition National Salvation Front in Tunisia, Ahmed Najib Chebbi, said that the political crisis in the country is worsening, which puts us in front of two options, "either comprehensive national dialogue or ruin." 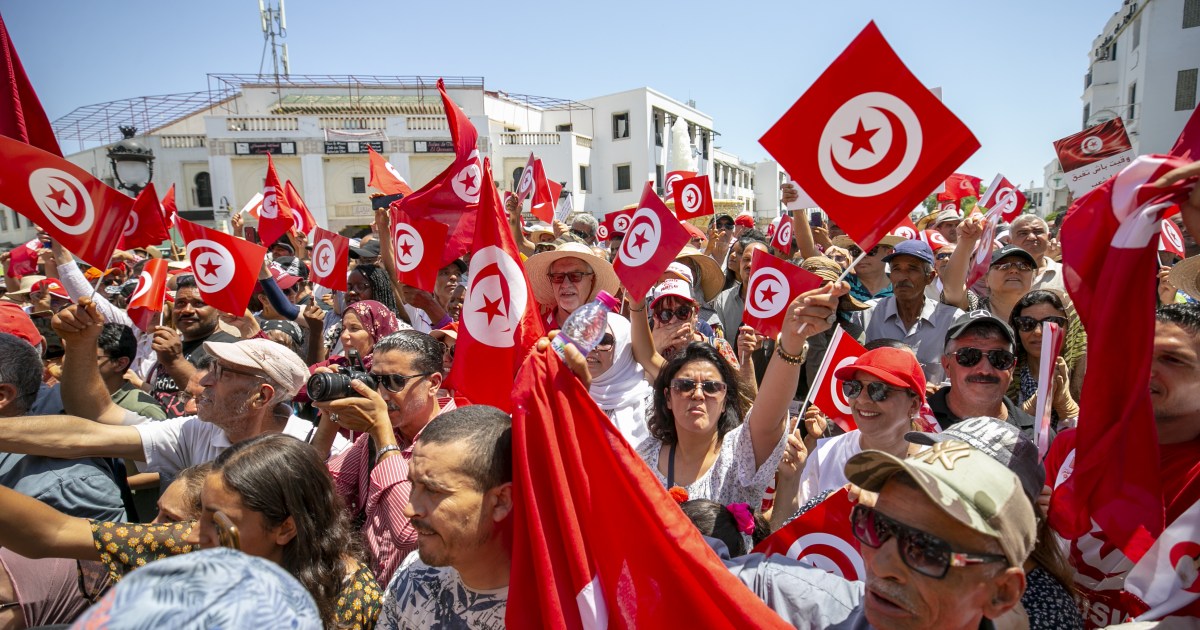 The head of the opposition National Salvation Front in Tunisia, Ahmed Najib Chebbi, said during a protest demonstration organized on Habib Bourguiba Street in the center of the Tunisian capital, that the country's political crisis is worsening, which puts us in front of two options, "either comprehensive national dialogue or ruin."

This coincides with the approval of Tunisian judges to extend their strike rejecting the measures taken by President Kais Saied for a third week.

In a speech he delivered in front of the front's supporters participating in the demonstration, Chebbi called the Tunisian General Labor Union for a comprehensive national dialogue, and its leaders to stop attacking the political forces, which he described as sincere.

He stressed that the Front will not remain neutral in the struggle for the independence of civil society organizations and that it extends its hand to all organizations, accusing the government of failing to fulfill its promises to suppliers, which led to the interruption of a number of basic materials in the country.

He added that "there are no partial or sectoral solutions in light of the severe financial crisis the country is going through, which requires a comprehensive national dialogue."

For her part, Samira Chaouachi, the first deputy speaker of the dissolved Tunisian parliament and a leader in the Salvation Front, said that President Saeed is targeting the constitution because it is the constitution for the independence of the judiciary.

In a speech during the demonstration, Al-Shawashi stressed the front's adherence to the 2014 constitution, describing it as the "constitution of national unity."

Since its founding was announced last April, the National Salvation Front has been engaged in anti-President Said movements, and called for the formation of a national salvation government to confront what it describes as the coup.

The front includes political entities and personalities opposed to the upcoming July 25 track, such as the Ennahda Movement, the Dignity Coalition, Qalb Tounes, "Tunisia Al-Irada", and "Citizens Against the Coup".

The participants in today's demonstration on Habib Bourguiba Street raised slogans against what they describe as President Said's "coup" against the elected institutions, and renewed their rejection of the referendum scheduled for next July 25 and their denunciation of military trials for civilians.

This demonstration comes, according to a statement by the Salvation Front, in defense of democratic gains, and a rejection of what it called "the play of dialogue and the referendum", and in support of the independence of the judiciary.

In the city of Nabeul, in the east of the country, the Coordination of the parties rejecting the referendum called, during a protest, to drop the planned referendum.

The participants in the vigil denounced what they called "individual choices" of President Saeed, and raised slogans rejecting the referendum and denouncing the deterioration of the social situation in the country.

The coordination - which includes five parties, the Republican Party, the Democratic Bloc, the Democratic Current, the Labor Party and the Pole Party - also confirmed that it will organize a number of moves in other Tunisian cities to highlight the danger of the authoritarian individual approach adopted by Qais Saeed, as she put it.

These protests coincide with the Tunisian judges' adoption of a set of escalatory moves against Said's decisions, the most important of which is extending the strike for a third week due to what they considered to be the president's disregard for their demand to reverse the decision to dismiss 57 of their colleagues.

The head of the Judges Association, Anas Hammadi, said that the movement continues to counter interference by the executive authority.

The head of the Tunisian Ennahda Movement, Rached Ghannouchi, praised - during the movement's youth conference - the judges' strike and their rejection of tyranny and turning them into a tool of the country's president, as he put it.

Ghannouchi added that Tunisia's gains during the last ten years, including democratic institutions, are now threatened by Tunisian President Kais Saied and his followers.

It is noteworthy that Tunisian President Kais Saied issued a presidential order early this June to relieve 57 judges of their duties on charges including changing the course of cases, disrupting investigations into terrorism files, and committing financial and moral corruption, which the judges deny is true.

This decree was rejected by Tunisian unions and parties, and sharp international criticism, especially from the United States of America and Amnesty International.