Yedioth Ahronoth: Israel is concealing the results of the investigation into the attack on the coffin of Shirin Abu Akleh

The Israeli newspaper, Yedioth Ahronoth, said that the Israeli police imposed a blackout on the results of the internal investigation it conducted into the circumstances of the occupation police’s assault on the coffin of Al-Jazeera reporter Shireen Abu Aqleh last May. 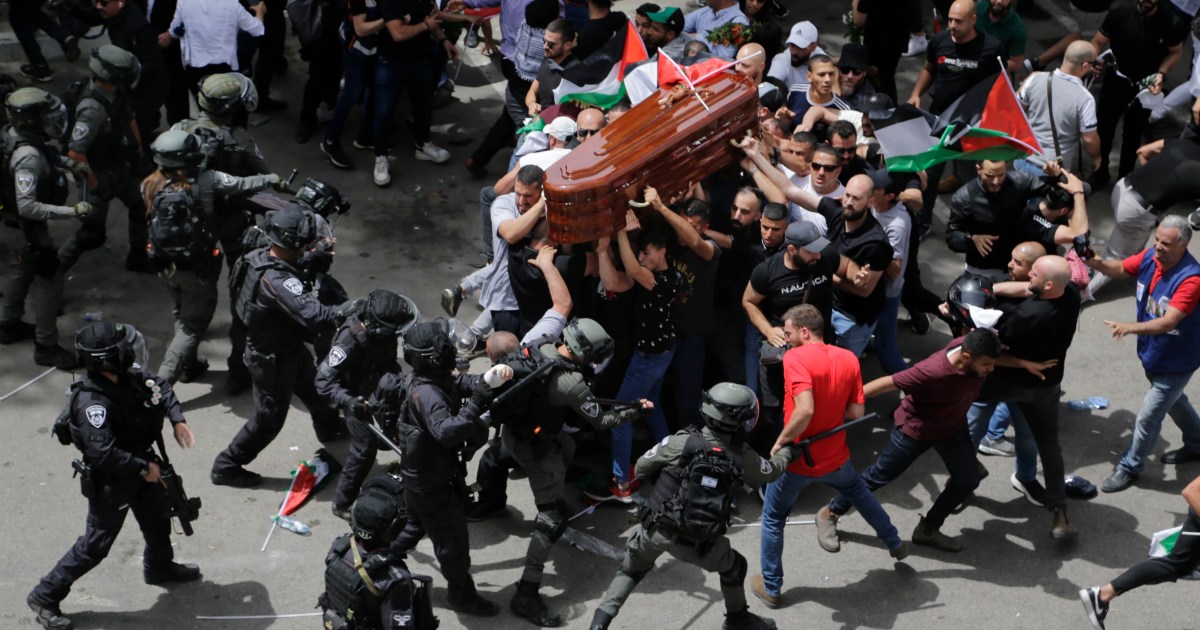 The Israeli newspaper, Yedioth Ahronoth, said that the Israeli police imposed a blackout on the results of the internal investigation it conducted into the circumstances of the occupation police’s assault on the coffin of Al-Jazeera reporter Shireen Abu Aqleh and the beating of the coffin bearers on the day of her funeral to her final resting place.

The website said that the police justified their decision by saying that the investigation focused on an incident related to a police operation, and the website quoted police sources as saying that the report did not conclude that any police officer and personnel are responsible for what happened.

The assigned investigation team had completed the preparation of the report, and submitted a copy of it to the Inspector General of the Israeli Police, Kobi Shaftai.

And Israeli media quoted Shaftai as saying that it is the police's duty to investigate so that such sensitive events do not recur.

The newspaper pointed out that Israel submitted requests to the US administration to transfer it to the Palestinians during the upcoming visit of US President Joe Biden to the Palestinian territories next month, and these requests include Tel Aviv obtaining the bullet that killed our colleague Sherine, which is in the possession of the Palestinian National Authority.

John Kirby, the coordinator of the US National Security Council for Strategic Communications, renewed his call for the United States to conduct a comprehensive and transparent investigation that ends with accountability in the killing of colleague Abu Akleh, and Kirby added in a press conference at the White House yesterday, Wednesday, that Washington will monitor the matter closely.

In the same context, Dai Bing, China's deputy representative to the United Nations, said during a session of the UN Security Council that the killing of journalist Shirin Abu Aqleh "shed light on the suffering of Palestinian women and should prevent its recurrence."

Palestinian President Mahmoud Abbas had blamed the Israeli occupation for the assassination of fellow Al Jazeera correspondent Shireen Abu Aqleh, and said during her funeral last May at the presidential headquarters in Ramallah, "We rejected and reject the joint investigation with the Israeli authorities, because they committed the crime, and we do not trust with it".

Palestinian Prime Minister Muhammad Shtayyeh also stated at the time that the Israeli side was responsible for the killing of Shireen Abu Aqleh, and stressed that his government would not hand over the projectile that killed Shireen Abu Aqleh, because it would falsify it, according to him.

Al Jazeera Media Network condemned the "heinous crime that is intended to prevent the media from fulfilling its message," and held the Israeli government and the occupation forces responsible for the killing of the late colleague Shireen.

The network confirmed - in a statement - that it will pursue the perpetrators to bring them to justice, and called on the international community to condemn the occupation and hold it accountable.

Since the martyrdom of our colleague Abu Aqleh, calls and demands have continued from many governments and organizations in the world to conduct a comprehensive and transparent investigation into the assassination of the Al-Jazeera correspondent and hold those responsible to account. sane.