Almost a month and a half has had to pass for United We Can to realize that they need to cover, at least momentarily, the cracks left in the coalition by the... 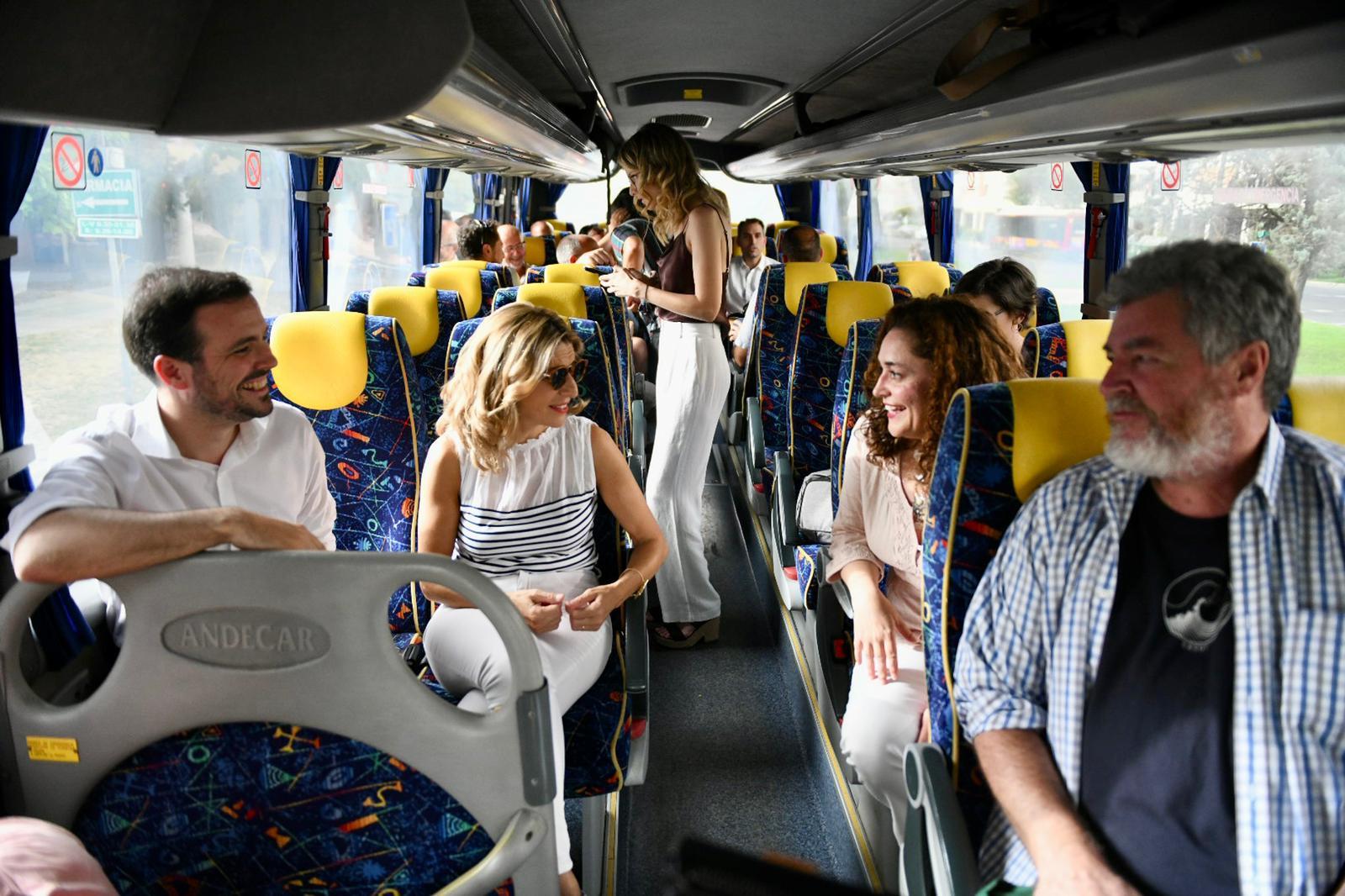 Almost a month and a half has had to pass for United We Can to realize that they need to cover, at least momentarily, the cracks left in the coalition by the struggle to lead the Andalusian left-wing candidacy to gain momentum in elections that they get more and more

and in which the great competitor, Teresa Rodríguez, is gaining ground.

After the fight between Yolanda Díaz and Pablo Iglesias to designate the head of the list - which the vice president won by imposing Inma Nieto - and the revenge of Podemos with the dismissal of Amanda Meyer as chief of staff in the Ministry of Equality of Irene Montero, Izquierda Unida and Podemos have staged this Tuesday

(Seville) the unity that they have not shown in recent months and not only because of the friction over the Andalusian candidacy, but also due to the "broad front" project " led by the vice president.

To heal the wounds, or to appear so, for the first time in the entire Andalusian campaign, a minister from Podemos, the head of Social Rights, Ione Belarra, and from the United Left, the Consumer, Alberto Garzón, coincided on stage, who, in addition, They

of their respective parties.

And they did it not in any act, but in what is considered the central rally of the campaign headed by Inmaculada Nieto.

Of course, the coincidence of Belarra and Garzón in the same place did not last

even half an hour

minister to go on stage, give her speech and quickly leave the Los del Río Municipal Auditorium in the Nazarene municipality.

In his speech, Belarra stood

for the achievements of the coalition government between United We Can and the PSOE, which he defined as "the first decent government in this country."

He did not forget to mention the loss due to menstruation as one of the main achievements, although he also highlighted the work of the rest of the ministers of the

party , including Garzón and Díaz, with whom the leader of Podemos has not had the best of relationships in the last few months.

The Minister of Social Rights recalled the few options they were given to sit in a council of ministers and how they managed it, just as in a few days, she ventured, it can be achieved in Andalusia.

Especially "if progressive people go out to vote," she said in a message aimed at mobilizing a

and apathetic electorate in the face of the fracture of the left and the conflicts they have led.

Belarra was not able to listen to the speech of her colleague from the council of ministers, who also highlighted the successes of the government coalition, but personalizing them in one person, Vice President Díaz, especially on account of the

, and without dedicating a word to the many that the

ones have signed up

Garzón has dedicated himself especially to denouncing

and the "radical program for the dismantling of the public sphere" that can be found when "scratching" the proposals of Juanma Moreno's PP.

Paraphrasing Walter Friedman, the general coordinator of IU accused the president of the Board of "selling the state in pieces" and taking measures, such as tax reform, solely for the benefit of a minority, the

who, he pointed out, he has lowered taxes and that they can afford, among other things, to pay for private healthcare.

Likewise, he urged that the process of building the Por Andalucía coalition go beyond election Sunday and "persevere in the construction" of that

Alberto Garzón, Yolanda Díaz and Inma Nieto, on the bus in which they arrived at the rally. POR ANDALUCÍA

Along with Belarra and Garzón, Vice President Díaz, who has gone from putting herself in profile to getting more and more involved in the electoral contest to support the candidate she promoted in the face of

of both brands, the candidate's personal brand and the electoral one decided at the last minute and in a tortuous process that was about to make blow up the IU-Podemos alliance and that, in fact, ended with the

party officially out of the confluence.

, on appealing to the vote not only to those who vote for IU, Podemos or Más País.

As Moreno's PP is doing, Díaz addressed the socialist voters "who have doubts" and those she asked to "give us a chance."

Díaz has insisted that "it is worth voting" and that they have demonstrated this with the coalition government in Madrid.

They have proven, he has reiterated, that "things can be changed."

He has not spared

of the management of the Andalusian president in these three and a half years, whom he has accused of selling an "Andalusian miracle that is false".

"The thing is not going to be a miracle, it is not going to invoke the Virgen del Rocío," he added, referring to the former Minister of Employment of the PP Fátima Báñez.

Likewise, he criticized the

, which he accused of "hiding" his program because if they showed it "the Andalusians would not vote for them" and highlighted the rally in which the Italian leader of the extreme right, Giorgia Meloni, participated, which "is scary ".

For all these reasons, he repeated over and over again the need to go to vote next Sunday because "Andalusia has a future" beyond

"In 2018 they did not win, we lost because we stayed at home," she concluded.