United States: these volunteers who defend clinics where abortion is performed

The United States is anxiously awaiting an imminent Supreme Court decision on an abortion rights case. If the highest American court authorizes them, twenty-six states… 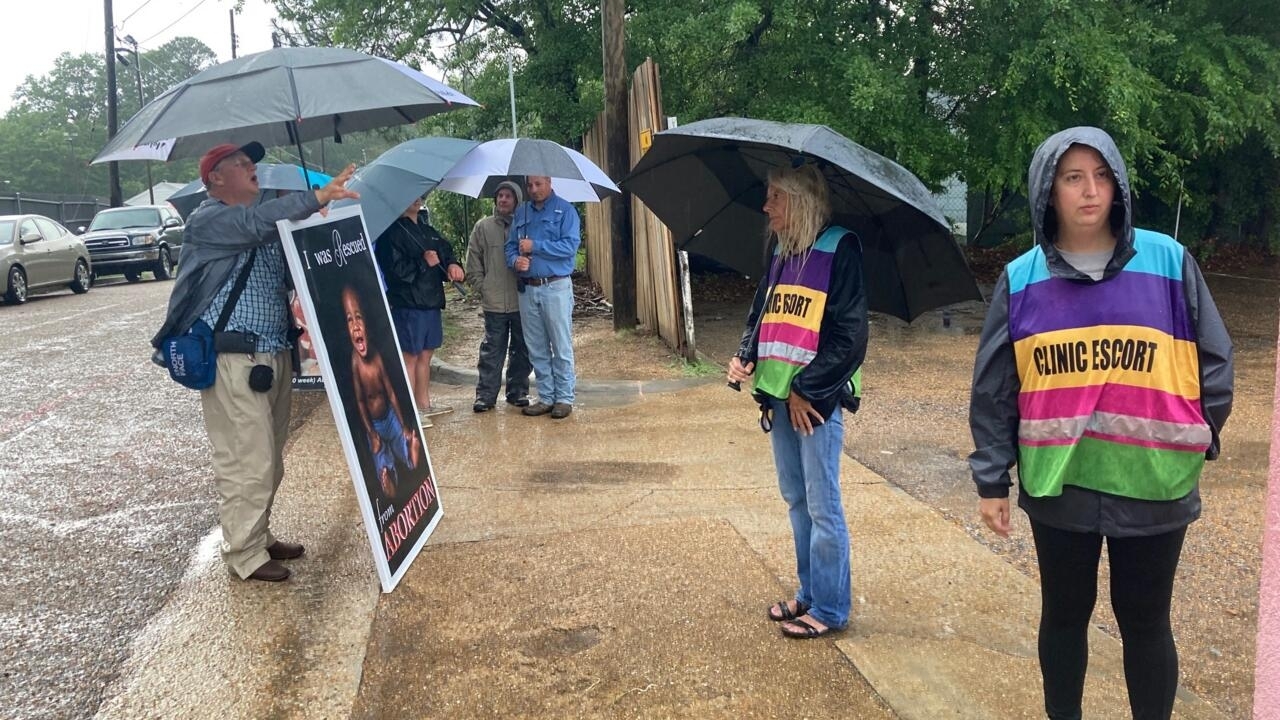 United States: these volunteers who defend clinics where abortion is performed

With her rainbow vest, Derenda Hancock (in profile) has been coordinating the clinic's defense for almost 10 years.

The United States is anxiously awaiting an imminent Supreme Court ruling on an abortion rights case.

If the highest US court authorizes them, twenty-six states – more than half of the country – should prohibit or very strongly restrict the possibility of having an abortion.

Pending this decision, teams of volunteers continue to protect these clinics every day, in front of which anti-abortion activists are demonstrating.

She knows their first names, their habits.

For nine years, she has coordinated the "

", the defense team for the Pink House of Jackson, the

To be able to devote herself to this mission, she resigned herself to working part-time.

I need to be here.

Someone has to do the job.

Patients have already faced so many difficulties before arriving at the clinic.

Every day, she helps these patients, who arrive by car, to make their way between the anti-abortion activists posted on the sidewalk of the clinic.

As long as possible, she protects them from insults, even death threats.

Their face is concealed by an umbrella.

Often, the Pink House Defenders play music, to drown out the cries of protesters.

"Those who support us can lose their jobs"

About fifteen volunteers take turns in front of this clinic.

Some others intervene only punctually.

In general, the candidates do not jostle at the gate.

Many of those who support us do so quietly.

If they showed this support, they could lose their job, lose their family, their friends

In Mississippi, talking about abortion is taboo and defending this right is even more so.

Last month, the coordinator says she received ten offers for help by e-mail.

But in the end, no one responded.

She leads us to a house where her teams can rest, a few meters from the clinic.

Since news of an

, anti-abortion activists have become even more aggressive towards clinic staff.

The best protection is to know your enemy.

When she's not in front of the clinic, she admits to spending most of her time researching them.

Ren, 24, started volunteering a few hours of his time just a month ago.

I go there once or twice a week, for shifts of about two hours.

To protect herself, the student says she has made some arrangements.

For example, she prefers to come on foot, rather than revealing her license plate.

I don't want them to know who I am, where I live, where I work

We call them the 'anti'.

They make me think of a mixture between terrorists

and these teenagers who persecute their classmates in college

Before confronting these anti-abortion activists, each new recruit must go through a long period of training.

For several weeks, prohibition to interact with the demonstrators.

At first, the clinic's defense team doesn't know how the newcomers will react by being yelled at or spat at

And honestly, you don't even know what you are capable of when someone tells you that you deserve to die or be raped

Mississippi doctor and ardent anti-abortion activist Coleman Boyd, center, and another counselor try to talk a patient out of following the Pink House Defenders and into the Jackson Women's Health Organization, the last abortion clinic licensed by the State in Jackson, Mississippi, Wednesday, December 1, 2021. AP - Rogelio V. Solis

The police with absent subscribers

A golden rule: avoid any physical contact, even if one of the demonstrators crosses the limits of the property.

Clinic advocates are urged to film the scene and send the video to law enforcement.

Yet the Jackson police are still reluctant to intervene.

The cops do nothing

", regrets Derenda Hancock, the coordinator of the Pink House defenders.

It's even rare that a police car moves here

There is no law enforcement

According to her, other clinics are experiencing the same situation.

If Jackson's Pink House were to close, Derenda would like to continue protecting these other establishments.

She assures that the demonstrators currently present in front of the clinic will not stop in Mississippi: “

They will go elsewhere, until they abolish abortion in the rest of the United States

: Abortion in the United States, the Mississippi at the heart of the battle