During his trip to Sichuan, what did Xi Jinping pay attention to?

Current Affairs News Eyes 丨 During his trip to Sichuan, what did Xi Jinping pay attention to?   In midsummer, General Secretary Xi Jinping visited Beijing for the third time this year.   In April this year, on the way to Hainan for inspection and at the meeting of the Political Bureau of the Central Committee, the General Secretary twice mentioned the phrase "I can't rest assured". In this trip 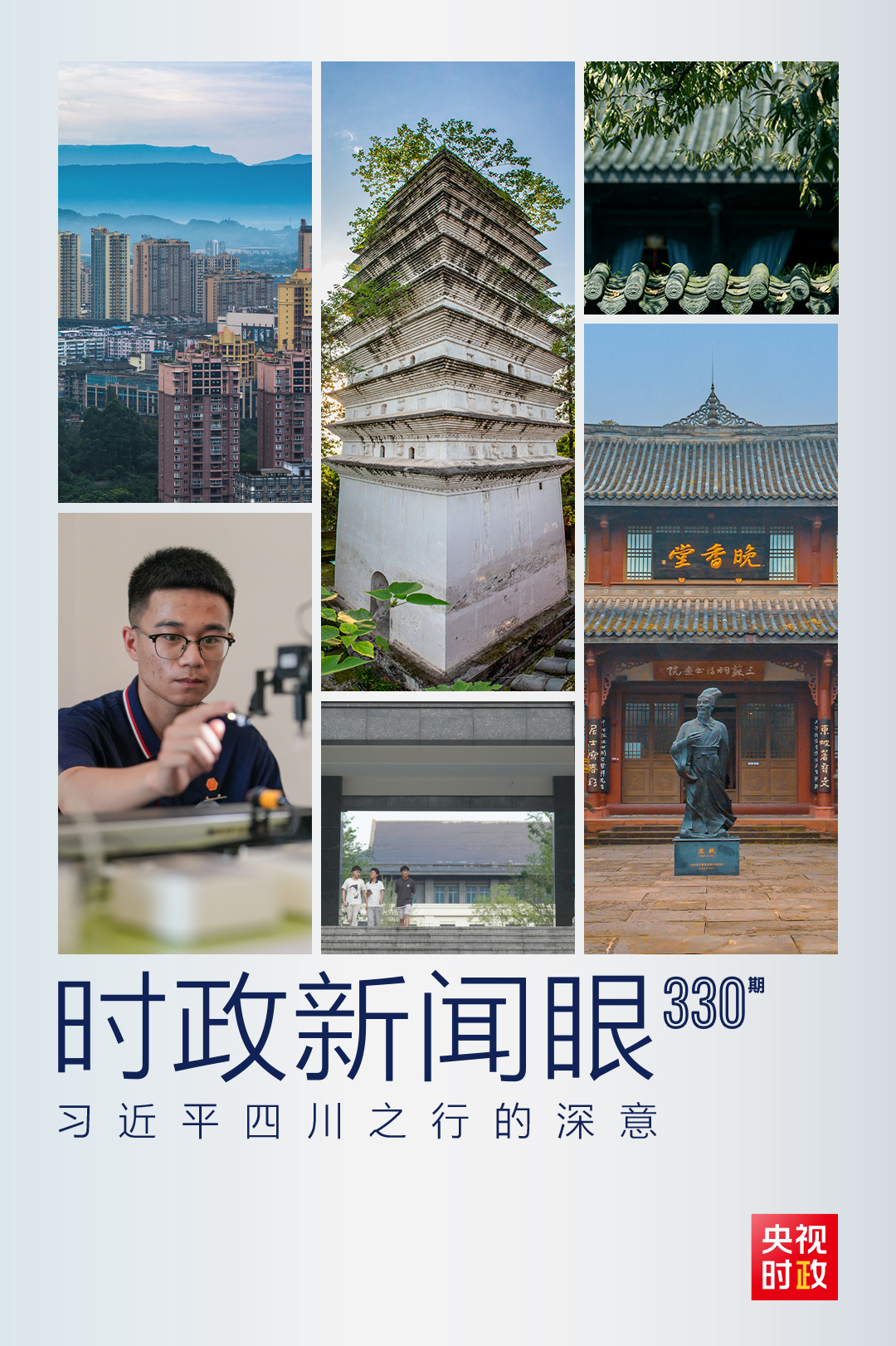 Current Affairs News Eyes 丨 During his trip to Sichuan, what did Xi Jinping pay attention to?

In April this year, on the way to Hainan for inspection and at the meeting of the Political Bureau of the Central Committee, the General Secretary twice mentioned the phrase "I can't rest assured".

In this trip to Sichuan, I have not forgotten the things I am "very concerned about" and "concerned very much", to emphasizing "doing all the people's affairs one by one", from expressing the "confidence" of securing China's rice bowl, to encouraging College graduates "keep an honest heart", conveying the responsibility, responsibility and feelings of "being at ease all the time".

△ Schematic diagram of the inspection point of the trip to Sichuan

These major events are here, Xi Jinping once again emphasized

To the "Tianfu Granary", first look at the grain.

Food security is the "bigger of the country".

At the end of last year, General Secretary Xi Jinping said that ensuring the supply of primary products is a major strategic issue. The Chinese people's rice bowls must be firmly in their hands at all times, and the rice bowls mainly contain Chinese grains.

This time in Yongfeng Village, the "Land of Abundance", the general secretary said that we have the confidence and confidence to take the Chinese people's jobs firmly in our own hands.

This year, the number of college graduates in my country is expected to reach 10.76 million, a record high.

The general secretary is very concerned about the employment situation of college graduates, and made a special trip to Yibin College to learn about it and give key guidance at key stages.

The Central Economic Work Conference at the end of last year made it clear that "solving the employment problem of young people such as college graduates".

In Yibin College, in addition to making clear requirements for schools, enterprises and relevant departments, the general secretary messaged graduates to "keep an honest heart", look at personal conditions and social needs objectively, and choose careers and jobs based on reality.

△ Yibin College, the scene of the corporate recruitment seminar.

Private enterprises are an important channel to solve employment problems including college graduates.

In this enterprise, the general secretary also focused on independent innovation and proposed to create more "invisible champions".

"Hidden champions" refer to small and medium-sized enterprises that are in an absolute leading position in a certain segment, but are invisible to the public.

When more and more "hidden champions" grow up, it is a mighty east wind.

Some truths are always in mind.

Some knowledge, engraved in the heart.

This is also "always restless".

Sansu and his son, especially Su Shi, can be regarded as the masters of Chinese excellent traditional culture.

At the Sansu Temple in Meishan, General Secretary Xi Jinping said that we must respect the excellent traditional Chinese culture and strengthen our cultural self-confidence.

In January this year, when the General Secretary visited the ancient city of Pingyao in Shanxi, he once emphasized the "three awes" - awe of history, culture, and ecology.

From "reverence" to "respect", it expresses the respect for the excellent traditional Chinese culture.

At the Sansu Temple, the general secretary also emphasized, "We must be good at absorbing the concepts and thinking of governing the country from the excellent traditional Chinese culture, and extensively learn from the achievements of all excellent civilizations in the world. .

△ This is one of the treasures of the town hall of Sansu Temple, the regular script "Drunkard Pavilion" rubbing.

(Photographed by Pan Yi, a reporter from CCTV)

During the inspection at the Sanjiangkou in Yibin, the general secretary said that Sichuan is located in the upper reaches of the Yangtze River. It is necessary to enhance the awareness of the overall situation, firmly establish the awareness of the upstream, and unswervingly implement the policy of joint efforts to protect and not to develop large-scale development. Good this Jiang Qingshui.

Water control is a systematic project.

To firmly establish a sense of upstream, we must be good at integrating the work of regions and departments into the great chess game of the party and the country, so as to not only win glory for one region, but also add luster to the overall situation.

No struggle, no youth.

During the inspection of private enterprises in Yibin, I saw that many "post-80s" and "post-90s" began to take the lead. The general secretary sent an affectionate message to young people: "There will be no pie in the sky, and all achievements must be achieved through our joint efforts."

When inspecting the preparations for the Beijing Winter Olympics in January this year, the general secretary encouraged the Winter Olympics athletes: "How many times can you fight in your life, the hard work is worth it. How can you get the fragrance of plum blossoms without going through the bone-chilling experience?"

A month ago, at the celebration of the 100th anniversary of the founding of the Communist Youth League of China, the general secretary called on the youth of the league members: "Use the wisdom and sweat of youth to work hard to create a better China!"

Everything in life must be done by itself, and it is a short walk in the mountains and rivers.

During the inspection in Sichuan, General Secretary Xi Jinping also put forward requirements, made arrangements, and made detailed instructions for several matters that he was very concerned about.

One is earthquake relief.

On June 1, an earthquake with a magnitude of 6.1 occurred in Ya'an, Sichuan, and the general secretary immediately gave important instructions.

During this inspection, the general secretary was very concerned about the treatment of the injured and the production and life of the people in the disaster area, and urged the local area to continue to do a good job in the treatment of the wounded, the aftermath of the victims, and the resettlement of the affected people.

After the 18th National Congress of the Communist Party of China, the General Secretary visited Sichuan for the first time, in May 2013, he went to the earthquake-stricken area of ​​Lushan.

On the first night of the inspection, the general secretary stayed in the prefab house in the tent area.

△ This is the overall picture of Lushan County, which completed post-disaster restoration and reconstruction in 2018.

One is to efficiently coordinate epidemic prevention and control and economic and social development.

The epidemic must be prevented, the economy must be stabilized, and development must be safe. These are the clear requirements of the Party Central Committee.

During the inspection in Sichuan, the general secretary pointed out that it is necessary to resolutely overcome some difficulties faced by the current economic development, do a good job in employment, social security, assistance to the poor and other aspects, do a good job in maintaining social stability, maintain the stability of people's hearts, and maintain The social situation is stable.

Another is flood control and disaster relief.

Recently, floods and geological disasters have occurred in some parts of our country.

Flood control and disaster relief, the general secretary has always been concerned about.

In January this year, he went to Shanxi for inspection. The first stop the general secretary went to was Fengnanyuan Village, Huozhou City, which was severely affected by the flood last year.

"It would be better to guard against 9 out of 10, and never miss a chance!" During the inspection in Sichuan, the general secretary emphasized that all relevant regions and departments should be based on preventing major floods, fighting major dangers, and rescuing major disasters, and make various emergency preparations in advance. , and comprehensively improve disaster defense capabilities.

In Yongfeng Village, General Secretary Xi Jinping told the villagers that the ruling of the Communist Party of China is to push forward the cause of socialism with Chinese characteristics step by step, to do everything well for the people, and to let the people live a better life. beautiful life.

"I can't rest assured at all times" is the responsibility of being a ruziniu, and it is a feeling that is too strong to be dissolved.