Xinhua News Agency, Hefei, June 5th, title: The tide is surging and the Jianghuai is sailing vigorously - Anhui chapter along the footsteps of the general secretary   The majestic Dabie Mountains, the red spirit continues to be inherited; the surging rivers and Huaihe River, the pulsating and strong development pulse.   Since the 18th National Congress of the Communist Party of China, General 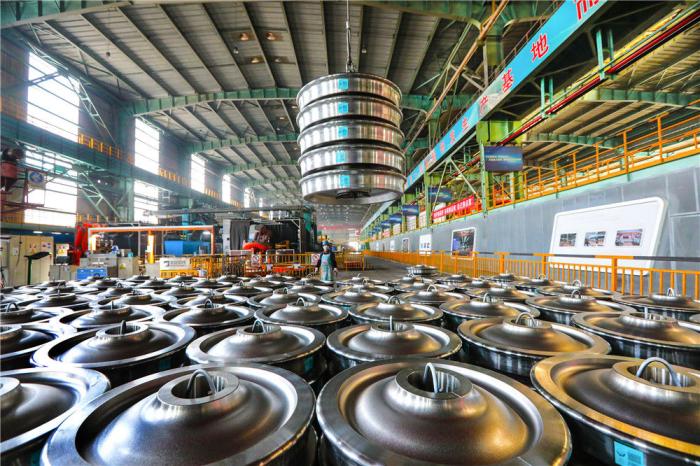 Xinhua News Agency, Hefei, June 5th, title: The tide is surging and the Jianghuai is sailing vigorously - Anhui chapter along the footsteps of the general secretary

The majestic Dabie Mountains, the red spirit continues to be inherited; the surging rivers and Huaihe River, the pulsating and strong development pulse.

Since the 18th National Congress of the Communist Party of China, General Secretary Xi Jinping has visited Anhui twice, emphasizing new development concepts, drawing new development patterns, and promoting major national strategies. Jianghuai has left him who traveled mountains and rivers to visit poverty and seek hardships and seek "the greatness of the country". footprints.

Anhui kept in mind the general secretary's entrustment and worked hard to write a new chapter in the construction of a modern and beautiful Anhui.

Anhui was once a "auditor" in the Yangtze River Delta.

Under the kind care and promotion of General Secretary Xi Jinping, Anhui became an "official student".

In August 2020, when presiding over a symposium on solidly promoting the integrated development of the Yangtze River Delta in Hefei, Anhui, General Secretary Xi Jinping said: "From Anhui, after adding it, it is like farming, improving soil and moisture, With high-quality seeds, crops will grow vigorously." He emphasized that Anhui "must focus on the two key words of integration and high quality."

What makes Ding Yi, chairman of China Baowu Maanshan Iron and Steel Group, unforgettable is that in August 2020, at a high temperature of nearly 40 degrees Celsius, the general secretary walked into the workshop and asked Maanshan Iron and Steel people: "In the integrated development of the Yangtze River Delta, we can seize the opportunity. , follow the trend".

At that time, Shanghai-based China Baowu Group and Maanshan Iron and Steel Group implemented a strategic reorganization not long ago.

On March 3, in the first wheel production workshop of China Baowu Maanshan Iron and Steel Co., Ltd., the finished wheel is being hoisted and ready to be shipped.

Bearing in mind the general secretary's entrustment, Magang people will seize the opportunity of the integration of the Yangtze River Delta and achieve a historical breakthrough of revenue exceeding 100 billion yuan and profit exceeding 10 billion yuan in 2021.

This year, the 350 km/h high-speed train wheels independently developed by Maanshan Iron & Steel will be installed on the Fuxing EMU.

In 2021, Shanghai, Jiangsu and Zhejiang will invest in 4,167 projects of more than 100 million yuan under construction in Anhui, and the actual funds in place will exceed 900 billion yuan, a year-on-year increase of 22.6%, accounting for half of the province.

Innovation is a key word frequently mentioned by General Secretary Xi Jinping during his two visits to Anhui, and it is also the first driving force for high-quality development.

During the two inspections, they inspected the scientific and technological achievements in detail and asked about innovation and development. The general secretary emphasized: "It is necessary to benchmark against world-class standards, strengthen frontier exploration and forward-looking layout, and intensify efforts to tackle key core technologies."

A model of the "Micius" quantum satellite taken at the Anhui Innovation Museum (photographed on August 25, 2020).

Anchoring the scientific and technological innovation community, Anhui continues to deepen the "two hearts and joint creation" of the comprehensive national science centers in Shanghai Zhangjiang and Anhui Hefei, and accelerates the construction of the Yangtze River Delta G60 Science and Technology Innovation Corridor.

In Anhui, the country's first national laboratory has been established, and the number of large scientific installations ranks among the top in the country.

"Delivering a Promise to the People with Action"

As a major agricultural province, Anhui has a large rural population, and once there were contiguous destitute counties in the Dabie Mountains, which was once the main battlefield for poverty alleviation.

The general secretary cares about the folks here.

In 2016, on the first day of General Secretary Xi Jinping’s visit to Anhui, he traveled all the way to Dawan Village, Huashi Township, Jinzhai County, in the hinterland of Dabie Mountains.

To build a moderately prosperous society in an all-round way, one cannot be missed. The general secretary encouraged everyone to "do our best to fight poverty and fulfill our commitments to the people with actions."

On May 11, Chen Zeshen, a villager in Dawan Village, Huashi Township, Jinzhai County, Anhui Province, was arranging shelves with local specialties such as fungus and dried taro.

Villager Chen Zeshen clearly remembered that in his small courtyard, General Secretary Xi Jinping was sitting next to him, "setting priorities" for the village's poverty alleviation work.

"From industry to education to bottom-line policies, the general secretary has been very careful, requiring 'we must focus on the next one'." Lao Chen said that he developed special planting and breeding, part-time public welfare positions in the village, and moved in with good policies. The new house, the second year will take the initiative to apply to take off the poverty hat.

The “mountain gate” of this impoverished mountain village that used to be “going out is the mountain” has opened wide, and a tea factory, homestay and tourist reception center have been built, and a new industrial road of “growing tea on the mountain, welcoming guests at home, and combining red and green” has been established.

At the Memorial Hall of the Battle of Crossing the River on the shore of Chaohu Lake, the general secretary pointed out: "At any time, we must not forget our original intention, keep our mission in mind, and never forget the roots of the people, and always be loyal people's servants."

In this year, all 4.84 million registered poor people in Anhui Province were lifted out of poverty, and the promise of "one must not be missing" has become a reality in the Jianghuai region.

Bearing in mind the general secretary's entrustment, Anhui will improve the dynamic monitoring and assistance mechanism to prevent the return of poverty, consolidate the effective connection between the achievements of poverty alleviation and rural revitalization, and comprehensively enhance the development momentum of the poverty-stricken population in poverty-stricken areas.

Tourists visit the Memorial Hall of the Battle of Crossing the River (taken on May 3, 2021, drone photo).

"It is necessary to firmly establish the people-centered development philosophy, and solidly promote people's livelihood projects."

Implementing the important instructions of General Secretary Xi Jinping, Anhui focuses on the people's urgency and hope, and launched ten actions to warm the hearts of the people this year, turning the "things that people look forward to" into "things that the party committee and government do."

"Respect for nature and conform to the laws of nature"

Outside the embankment, the calm Huai River flows east day and night.

Inside the embankment, the relocated residents in Baozhuangxu, Wangjiaba Town, Funan County ushered in another summer after "farewell" to Zhuangtai. The small garden is full of green eyes, and the small square is full of people. close by."

"Guide and encourage villagers to move out gradually to ensure that the population of flood storage areas will not increase"; "We must respect nature, follow the laws of nature, actively respond to natural disasters, and live in harmony with nature"; "Build socialist modernization in an all-round way and resist natural disasters" Capabilities must also be modernized.”

Following the important instructions of General Secretary Xi Jinping, Anhui carried out the relocation of residents in the flood storage area of ​​the Huai River, and more than 110,000 people in the "water pocket" were moved to safe areas; the agricultural industry structure along the Huai River was adjusted, and adaptive agriculture was developed in the flood storage area.

Anhui is one of the few provinces in the country that has large rivers and lakes at the same time. From preventing the harm of water, eliminating the disadvantages of water, to promoting the benefits of water, and demonstrating the goodness of water, General Secretary Xi Jinping has carefully drawn it.

At the Xuejiawa Ecological Park in Ma'anshan City, the general secretary emphasized: "To implement the ten-year fishing ban on the Yangtze River, we must do the relevant work well, so that the majority of fishermen are willing to go ashore and get ashore, so that they can stabilize and become rich after going ashore."

"The general secretary has shown us a path of happiness." Chen Lanxiang, a fisherman who went ashore, said that in 2021, she will set up a housekeeping company with the fishermen who came ashore from Xuejiawa, which not only has stable income but also dividends.

Throughout 2021, more than 20,000 fishermen who have returned from fishing in Anhui will be employed.

Chen Lanxiang, a fisherman who went ashore in Xuejiawa, Ma'anshan City, Anhui Province, exercises in the community where her new home is located (photo taken on October 31, 2020).

In order to realize the harmonious coexistence of people and water, Anhui has listed the construction of the Yangtze River (Anhui) Economic Belt with clear water, clean water, green industry, beautiful and beautiful Yangtze River (Anhui) as the "No. 1 Project" for ecological civilization construction. It has established a special organization to perform the comprehensive management of Chaohu Lake Basin in a unified manner, and managed 52 rivers and tributaries entering the lake. Invested 39 billion yuan for the comprehensive management of Chaohu Lake, built the “Top Ten Wetlands” around Chaohu Lake, and comprehensively carried out ecological restoration.

In today's Anhui, ecological advantages are emerging, and high-quality development is showing a good trend.

In 2021, the total economic volume of Anhui will exceed 4 trillion yuan, leaping to a new level.

The children of JAC will surely create more gratifying achievements in the new journey of realizing the great rejuvenation of the Chinese nation.