Chinanews.com Review: The United States has forgotten four things about itself when it always makes up stories about the human rights of other countries! 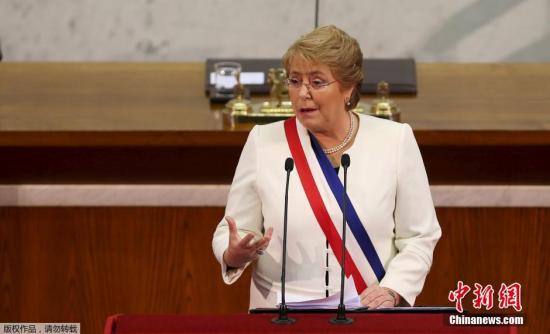 After the visit to China, Bachelet praised China's great achievements in poverty reduction and eradication of extreme poverty; affirmed China's implementation of universal medical insurance and universal unemployment insurance plan; attached importance to China's domestic and international support for the multilateral 2030 agenda and sustainable development goals China's efforts in legislative and judicial reforms such as women's rights and the Civil Code are welcome.

However, the visit, which was highly valued by Bachelet and described as an "opportunity", was slandered and distorted by the West.

Before the start of the trip, Washington denounced the High Commissioner for Human Rights' visit to China as "a mistake". Together with London, they wantonly smeared the human rights situation in China's Xinjiang, Tibet, Hong Kong and other places.

After the trip, the U.S. State Department and others devised a new set of rhetoric, falsely claiming that Bachelet's trip was "restricted" and "manipulated."

For them, human rights are just a rhetoric, but in fact, lice have already been crawling under their robes.

They seem to have forgotten four things:

First, the United States has the highest incarceration rate and the largest number of people incarcerated in the world.

The US prison population is as high as 2 million, accounting for 1/4 of the world's prisoners.

Among these detention institutions, the Guantanamo military prison set up by the US military in 2002 is the most notorious.

The prison has held members of terrorist organizations such as al-Qaeda for many years, but many people have been subjected to various abuses and forced to confess guilt without normal prosecution or trial.

Data map: Americans gathered in front of the White House to protest, demanding that the US government fulfill its promise to close the Guantanamo prison.

Not only that, under the long-term collusion of public power and capital interest groups, a large number of public prisons in the United States have been privatized, and more than 100,000 people have been detained in private prisons.

Prisoners there have been engaged in high-intensity, low-paid forced labor for a long time. Violence, sexual assault, and restricted access to medical care are commonplace. Wrongful deaths also occur from time to time.

It is not an exaggeration to say that these private prisons are like "hell".

In fact, according to statistics, thousands of people in the United States have been wrongly convicted since 1989, with a total of 25,600 years in prison.

In addition, the United States, which boasts a sound labor legal system, has not even signed such important documents as the Forced Labor Convention.

Second, the United States is the country with the worst gun violence problem in the world.

The United States has a population of about 333 million, but there are more than 400 million private firearms, accounting for 46% of the total number of private firearms in the world.

People in Uvalde, Texas, mourn the 19 children killed in the elementary school shooting.

Recently, mass shootings have occurred in the United States. A Texas elementary school was raided, and nearly 20 children were killed; a supermarket in Buffalo, New York, was shot, and more than 10 African Americans were killed and injured.

She noted that the killings in the United States were "sad" and showed that there was no solution to the problem and that "this horrific human rights situation needs to be stopped."

In the past 10 years, most of the gun control and gun ban proposals proposed by the Democratic Party in the United States have been blocked by the Republican Party, and very few have finally signed into law.

Coupled with the huge industrial chain formed by gun production and trading over the years, interest groups can easily influence U.S. policy and public opinion, and chronic illnesses are hard to eradicate.

Third, the United States is the country with the most severe new crown epidemic and the largest number of confirmed and dead people in the world.

Data map: Hundreds of thousands of white flags are planted on the National Mall in Washington, the capital of the United States, to mourn the deceased of the new crown.

Whether it is wearing masks, quarantine or vaccination, they have become "political weapons" in the fight between donkeys and elephants.

The Democratic and Republican parties in the United States have used these issues concerning the life and death of the public to confront each other and become accomplices in the worsening of the epidemic.

Countless families have been shattered, and more than 200,000 American children have become "coronavirus orphans".

Many of them come from the bottom of society, are in dire need of financial help and suffer from mental illness.

However, while the United States will pass a huge bill of 40 billion US dollars to assist Ukraine, its own anti-epidemic funds have been delayed.

Where are the human rights of the American people?

Fourth, the United States has a very poor human rights record in the treatment of minorities, refugees and other groups.

Regardless of how the Native Americans and African Americans who were trafficked to the United States were treated, two years ago, the death of African American Floyd by kneeling on the neck by a white policeman is enough to show that this country treats ethnic minorities. It goes against its rhetoric of "protecting human rights".

On May 25, 2021, local time, in New York, the United States, people commemorated the first anniversary of the death of George Floyd, an African-American man.

According to a recent poll, 71% of Asian-American respondents believe they have been racially discriminated against in the United States.

Hate crimes against the Asian American community more than tripled from 2020 to 2021.

Asians are used as "scapegoats" for social problems such as epidemics and unemployment, and are attacked, bullied, and even killed.

Sadly, out of 233 attacks, only seven were convicted.

In just a few months, hundreds of thousands of illegal immigrants have been brutally handled by U.S. law enforcement at the U.S.-Mexico border.

The conditions in the private detention centres they are in are poor, children are separated from their parents for long periods of time, and women are humiliated or raped.

Instead of the "American Dream", these immigrants have fallen into a humanitarian crisis.

Bachelet said recently that OHCHR has submitted a report on racial discrimination and law enforcement to the UN Human Rights Council, including the United States.

Before pointing fingers at other countries and fabricating rumors, should the United States first open its own human rights record to see what is recorded and find out who is "sick"?