This conspiracy in the United States has gone bankrupt, and now it's embarrassed!

American comics are interesting (one) This American conspiracy has gone bankrupt and is now in a state of anger.   What conspiracy?   He just wants to manipulate the UN High Commissioner for Human Rights Michelle Bachelet to visit China and launch an attack on China on the Xinjiang issue.   The struggle is still fierce.   At the UN Security Council meeting on June 2, in response to the groun 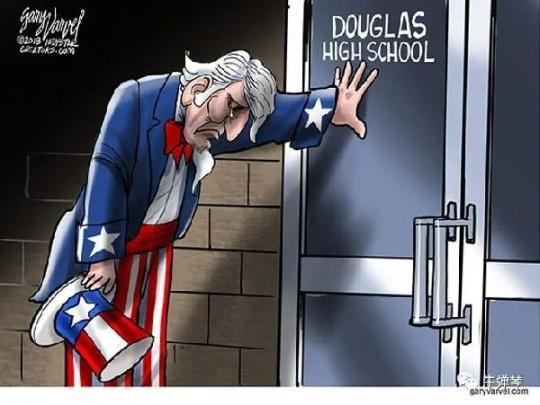 This American conspiracy has gone bankrupt and is now in a state of anger.

wants to manipulate the UN High Commissioner for Human Rights Michelle Bachelet to visit China and launch an attack on China on the Xinjiang issue.

The struggle is still fierce.

At the UN Security Council meeting on June 2, in response to the groundless accusations made by the United States and the United Kingdom, Dai Bing, China's Deputy Permanent Representative to the United Nations, said that

there is a Western proverb, if you tell a lie, you must create another 100 lies to cover it up.

The so-called "genocide" and "forced labor" in Xinjiang are outright "lie of the century"...

It is indeed a "lie of the century", but some people have ulterior motives.

Dai Bing further pointed out that

A recent struggle revolved around Bachelet's visit to China, with several interesting details.

Detail one, earlier, attacking China did not cooperate.

The United States and some other countries have been attacking China for not allowing the UN Human Rights High Commissioner to visit China, thereby implying that China has some hidden secrets.

The Chinese side's countermeasures are actually very simple, just agree on a suitable time and let the High Commissioner for Human Rights come to see it in person.

After all, seeing a hundred things is better than seeing them.

But this kind of smear tactics, the United States has always been very good at.

I remember that at the beginning of the epidemic, the US also accused China of preventing the WHO expert team from visiting China on the issue of virus origin.

Second, before the trip, accusing Bachelet of visiting China was a mistake.

Seeing that China is not acting according to the US script, Bachelet is welcome to visit China.

The United States quickly changed its attitude. Before Bachelet's trip, it accused Bachelet that her visit was wrong and that the itinerary would be controlled by the Chinese side, so on and so forth.

I laughed when I saw an article in RIA Novosti:

At first, some so-called professional Xinjiang human rights defenders have been calling for the UN Human Rights High Commissioner to visit China for several months.

They seem to think that this will never happen.

But when Bachelet did go to China, they started clamoring again that it was a mistake and shouldn't go.

So much so that the spokesperson of the Ministry of Foreign Affairs Zhao Lijian publicly refuted: Bachelet's activities during his stay in China were arranged according to his wishes and through full consultation between the two sides.

High Commissioner Bachelet also said at a press conference that there were extensive and unsupervised exchanges during his visit to China.

What is the limit?

The answer is obvious.

In fact, it is the US that really wants to manipulate this visit.

Details three, after the trip, he even asked Bachelet to resign.

In this high-profile visit to China, Bachelet went to Guangzhou and Xinjiang, walking, watching, and communicating all the way.

According to the introduction of Vice Foreign Minister Ma Zhaoxu, during his stay in Xinjiang, China gave Bachelet a comprehensive introduction to Xinjiang's measures and achievements in counter-terrorism and de-radicalization, economic and social development, ethnic and religious, and labor rights protection. Urumqi conducted a field visit and held discussions with people from all walks of life such as ethnic minorities, experts and scholars...

with the joint efforts of both sides, this visit has achieved positive and practical results.

A trip that the US tried to incriminate China ended up with "positive and pragmatic results." Obviously, this is unacceptable to some people in the West.

Although the U.S. official rhetoric is still the same, some so-called "human rights organizations" and personalities manipulated by the U.S. side have been besieging Bachelet frequently recently, and even asked her to resign.

Alas, just because the Americans were not satisfied, the US directly asked the UN High Commissioner for Human Rights to leave.

Are you a little embarrassed?

Why is this happening?

I don't like conspiracy theories, but when it comes to the Xinjiang issue, the United States used Bachelet to visit China to launch a series of attacks and smears. It cannot help but question the intentions of some people in the West.

Does the US really care about human rights in Xinjiang?

You must know that in the past 20 years, the United States has had violent conflicts with many Islamic countries. The military invaded Afghanistan and Iraq, and imposed severe sanctions on Iran and Syria. How many tragedies have been created, and how many civilians have been "manslaughtered" by the US military. Photos and videos are evidence. The United States cannot deny it either. Where are human rights?

But the United States doesn't care about Afghanistan and Iraq, it just cares about China's Xinjiang. In the words of some friends, this is just to smear China's international reputation, provoke China's civil unrest, and at the same time combat Xinjiang's important role in the "Belt and Road", etc. Wait.

Interestingly, the Middle East countries, which should have the most attitude, have very different views from the West.

For example, when Saudi Foreign Minister Faisal visited China at the beginning of this year, he said in front of Wang Yi that

This is the attitude of the Middle East countries. I wonder if the United States has seen it.

Of course, even if you see it, you just don't see it.

The double standard is speechless.

Moreover, the so-called "genocide" accusation in the West is too absurd.

Who is "genocide" can't be more obvious.

However, the United States has continued to add drama. Recently, it has declared that it will completely block Xinjiang products on the grounds of so-called "forced labor."

Finally, what do you think?

As a senior politician, Bachelet was the president of Chile, and his work in the post of High Commissioner for Human Rights is also remarkable.

But even with such qualifications, she is not a Western politician after all, and the constraints she has suffered can be imagined.

Especially this trip to Xinjiang, all kinds of smears and attacks from the United States and the West must have made her feel unprecedented pressure.

Resisting pressure and sticking to your conscience is sometimes a very difficult thing in this world.

Second, China's diplomacy does have a set.

The fight is still great.

The United States believes that China does not dare to allow the High Commissioner for Human Rights to visit China, so it smears it in various ways. However, when China judges the situation, it is to invite Bachelet to come to China, and let her see what she wants to see.

Wang Yi personally greeted him in Guangzhou, and the top leaders also met by video. Frankly speaking, these are somewhat unusual diplomatic moves, and it also highlights the importance China attaches to Bachelet's visit to China. I also hope that she will be a rational and just person who can Say a few words of justice.

Of course, the struggle continues.

Anyway, it's an attack.

You can never wake up a person who is pretending to be asleep.

Third, come and go without being indecent.

I always feel that to deal with such smears and attacks, it is necessary to clarify and open up.

During Bachelet's visit to China, another mass shooting occurred in the United States, and 19 poor elementary school students were killed at gunpoint.

Even Biden lamented that this was a massacre.

There are so many massacres in the United States every year. Is this not a violation of human rights?

What has the US government done?

Bachelet, should I go to the United States to see?

In addition, there are endless racial discrimination cases, black people are so angry that "I can't breathe", and Chinese people are also attacked in various ways.

Should this blatant discrimination be investigated by the High Commissioner for Human Rights?

In this world, human rights protection is not the best, only better, and all human beings must do their best.

On the issue of human rights, there is no perfect "Utopia", and there is no need for a "Master Teacher" who is bossy to other countries.

many times, an indisputable fact is that the ideal country is not ideal, and the teacher's house is full of chicken feathers.

Personal opinion, does not represent any organization!