Roland-Garros: Rafael Nadal in the final after Zverev's injury abandonment

Rafael Nadal qualified for the Roland-Garros final on Friday June 3 after a match cut short by the injury of Alexander Zverev, who was forced to retire before the tie break of the second set. Nadal… 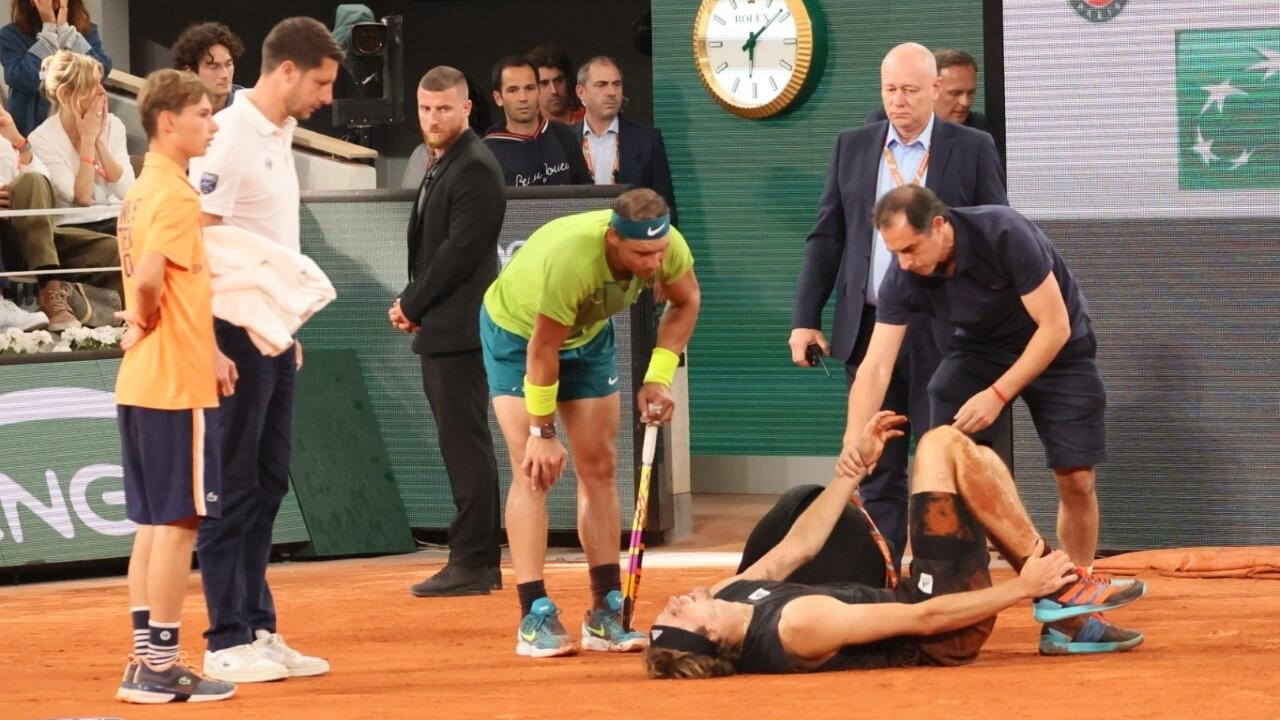 Roland-Garros: Rafael Nadal in the final after Zverev's injury abandonment

Rafael Nadal next to Alexander Zverev struck down by an ankle injury.

Rafael Nadal qualified for the Roland-Garros final on Friday June 3 after a match cut short by the injury of Alexander Zverev, who was forced to retire before the tie break of the second set.

Nadal will play his 14th final on Parisian clay on Sunday against Casper Ruud (8th) or Marin Cilic (23rd).

This semi-final of Roland-Garros had gone to appear in the anthology section before the tragedy occurred.

An Alexander Zverev forced to give up when he was trailing 7-6 (10/8), 6-6 after a standoff of more than three hours.

The German indeed violently twisted his right ankle after his final strike and was evacuated in a wheelchair before returning on crutches to formalize his abandonment.

The cruel epilogue of a dantesque match because before Zverev's injury, the two players were playing a marathon match: after a little over three hours of play, they had not yet completed the second set.

Each of the two sets lasted the time of a football match.

It's very hard, I'm very sad for him

He was playing an incredible tournament, I know how much he fights to win a Grand Slam.

He was really unlucky, but I'm sure in the future he will win, and not one, but many more.

Of course, to be in the final of Roland-Garros once again is a dream, but at the same time, that it ends like this, to see him cry in the locker room, it is a very difficult moment

Alexander Zverev, with his crutches, greets the public at Roland-Garros after his retirement against Nadal.

The Mallorcan left-hander pocketed the first in a very hard fight, after facing four set points in a row in the decisive game (from 6-2 to 6-6).

The 25-year-old German had the best start to the game by breaking from the start and leading 4-2.

But Nadal picked up, then got three first set points at 5 games to 4. In vain.

The Spaniard ended up concluding on his sixth opportunity in the tie-break.

In the equally contested second set, almost every service game resulted in breaks, and Zverev failed to finish when he served 5 games to 3 to tie it at one set all.

Nadal, thirteen times winner on Parisian clay since 2005, will play his fourteenth final there on Sunday against the Norwegian Casper Ruud (8th) or the Croatian Marin Cilic (23rd), opposed in the second semi-final.