Learning from Mengxia day every day, everything is beautiful.   At the celebration of the 100th anniversary of the founding of the Communist Youth League of China, I hoped deeply for the youth, gave a video speech to the opening ceremony of the Global Trade and Investment Promotion Summit and the BRICS Foreign Ministers' Meeting, advocated cooperation and security, and met with the representati 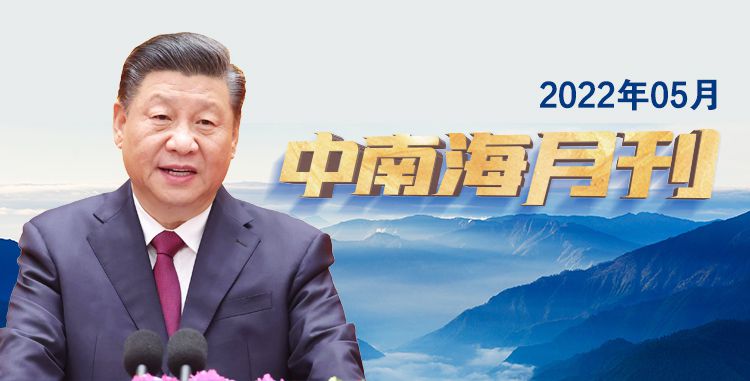 Learning from Mengxia day every day, everything is beautiful.

At the celebration of the 100th anniversary of the founding of the Communist Youth League of China, I hoped deeply for the youth, gave a video speech to the opening ceremony of the Global Trade and Investment Promotion Summit and the BRICS Foreign Ministers' Meeting, advocated cooperation and security, and met with the representatives of the National Public Security System Heroes and Models Collective Commendation Conference... 5 This month, General Secretary Xi Jinping's important activities are both economical and rich in content both internally and externally.

Talking about youth, openness, meeting new friends, reciting old friends... In many activities in May, the themes explained by the general secretary have rich and far-reaching implications, from "China of Youth" to "China of the World", from "Today's China" China” to “China of the Future”, closely linking the past, present and future.

CCTV's "Zhongnanhai Monthly" uses intelligent big data to sort out and review the main points of General Secretary Xi Jinping's activities in May.

CCTV's "Zhi Wen" system extracted and analyzed the hot topics of current political news on the entire network in May 2022, and the celebration of the 100th anniversary of the founding of the Communist Youth League of China attracted the attention of netizens. Topics such as "Working with Youth", "Work hard with the wisdom and sweat of youth to create a better China", "New era, the general secretary hopes for the youth" and other topics are very hot.

Established for a hundred years, be a pioneer.

In his speech on May 10, the general secretary mentioned the word "pioneer" 10 times.

He encouraged the young members of the Youth League to be the trend-setters of the new era, consciously obey the call of the party and the people, have a "big country" in mind, take on missions and tasks, and go to the new era and new world to display their ambitions, make achievements, and strive to be dream chasers of great ideals. Strive to be a new force for great causes, and let youth bloom beautifully in the places where the motherland and the people need it most.

The direction of our aspirations is boundless, and there is no limit to the distance between the mountains and the sea.

In May, the general secretary also communicated cordially and interacted with groups such as aerospace youths, young returned scholars from Nanjing University, and heroic models of the public security system through letters and meetings.

"Building a strong aerospace country depends on continuous struggle from generation to generation" and "conscientious pursuit of serving the country and serving the people"... The general secretary hopes that the youth will work hard with the wisdom and sweat of youth to create a better China.

CCTV's I-learning database summarizes and analyzes General Secretary Xi Jinping's important speech in May 2022, and words such as "development", "technology" and "people" are among the most frequent.

It is worth noting that words such as "enterprise" and "policy" also appear frequently.

On May 18, at the celebration of the 70th anniversary of the establishment of the China Council for the Promotion of International Trade and the Global Trade and Investment Promotion Summit, the general secretary proposed to "gather together to defeat the epidemic", "reinvigorate trade and investment", "adhere to innovation-driven" and "improve global governance". 4 points of advice.

Since its establishment 70 years ago, the China Council for the Promotion of International Trade (CCPIT) has been based in China and facing the world, and has played an important role in tightening the ties of interests between Chinese and foreign enterprises, promoting international economic and trade exchanges, and promoting the development of state-to-state relations.

In May 1953, a French industrial, commercial and trade delegation of 14 people visited China at the invitation of the China Council for the Promotion of International Trade. The two sides reached an agreement on Sino-French barter trade on June 5.

The signing of this agreement marked the beginning of non-governmental trade between New China and France.

On May 10, 2022, General Secretary Xi Jinping said in a telephone conversation with French President Emmanuel Macron that China is willing to expand the import of high-quality products from France, welcomes French financial and high-tech enterprises to cooperate in China, and hopes that the French side will invest and cooperate for Chinese enterprises in France. Provide a fair, just and non-discriminatory business environment.

In the same May, after a lapse of 69 years, these two friendly exchanges have become important witnesses of China's continuous expansion of opening up, the sharing of development opportunities for enterprises from all countries, and the realization of mutual benefit and win-win results.

In May, from "epidemic prevention policy" to "foreign policy" to "macroeconomic policy", the deep meaning behind these words-the epidemic must be prevented, the economy must be stabilized, and development must be safe, is the clear requirement of the Party Central Committee.

The CCTV I-learning database combed and analyzed General Secretary Xi Jinping's important schedule in May 2022. Through the correlation map, it can be found that some metaphors in "Related Items" are intriguing, and some stories in "Related People" are moving.

At the celebration of the 100th anniversary of the founding of the Communist Youth League of China, the general secretary likened the youth to "a thriving tree" and "the rising sun", saying that the small tree will one day grow into a towering tree to support the sky , Chaoyang will always sprinkle light and heat all over the earth for a moment.

He encouraged the Communist Youth League members in the new era to "be willing to be a screw that never rusts".

On May 18th and May 19th, during two major diplomatic events within two days, General Secretary Xi Jinping mentioned making the cake of cooperation bigger, declaring to the world China's firm determination to adhere to opening up and join hands with the world for win-win cooperation.

When talking on the phone with President-elect Marcos of the Philippines, General Secretary Xi Jinping quoted the famous Philippine saying, "If you don't know the time, you can't go far," and looked forward to the bright future of China-Philippines friendship in the new era.

On May 24, the media reported that General Secretary Xi Jinping recently wrote a letter to Ms. Sarah Randy, a friend in Iowa, the United States.

A beautiful friendship that has lasted for 37 years has written a new chapter again.

"The Chinese people are willing to continue to work with the American people to strengthen friendly exchanges, promote mutually beneficial cooperation, and jointly promote the well-being of the two peoples." In the letters and replies, "one come and one exchange", we feel the general secretary's often said "Chinese people attach great importance to Chinese people." Loyalty".

On May 27, the Political Bureau of the CPC Central Committee conducted the thirty-ninth collective study on deepening the project of exploring the origin of Chinese civilization.

When presiding over the study, General Secretary Xi Jinping emphasized that we must adhere to integrity and innovation, promote the adaptation of Chinese excellent traditional culture to socialist society, demonstrate the unique spiritual identity of the Chinese nation, and better build Chinese spirit, Chinese values, and Chinese strength.

In May's "Related Works", "Accelerating the Construction of a Powerful Country in Science and Technology to Achieve High-level Science and Technology Self-reliance" and "Correctly Understanding and Grasping Major Theoretical and Practical Issues in my country's Development" were published one after another. and other works published in the country.

General Secretary Xi Jinping's concept of governing the country and governing strategy, looking at the overall situation, observing the general trend, and taking a long-term perspective everywhere, demonstrate the determination and confidence to plan for the future.