A new variant of Omicron may cause a surge in cases in the United States, the EU will provide Poland with a large recovery fund

(Fighting against New Coronary Pneumonia) The new variant of Omicron may cause a surge in cases in the United States. The EU will provide Poland with a large recovery fund   China News Agency, Beijing, June 3. Comprehensive news: The latest data from the official website of the World Health Organization shows that as of 19:38 on the 2nd Central European Time, the cumulative number of confirmed ca 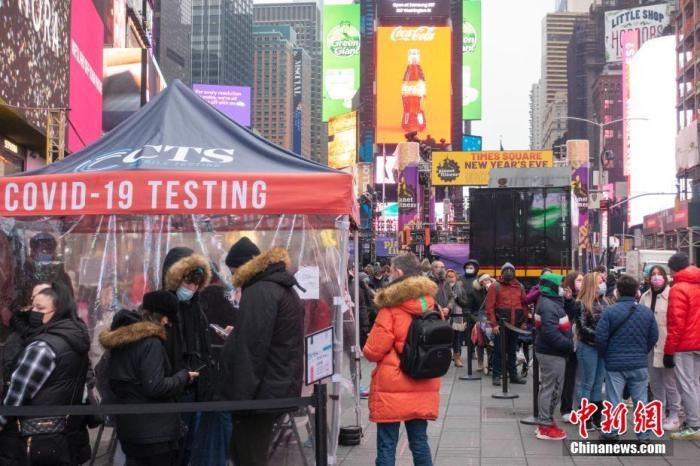 (Fighting against New Coronary Pneumonia) The new variant of Omicron may cause a surge in cases in the United States. The EU will provide Poland with a large recovery fund

WHO Director-General Tedros Adhanom Ghebreyesus said on the 1st that more than 550 confirmed cases of monkeypox have been reported in 30 non-monkeypox-endemic countries and regions around the world. .

But according to WHO experts, monkeypox is unlikely to develop into another global pandemic after the new crown.

Data map: People line up for testing at a new coronavirus testing point in Times Square in New York, the United States.

Americas: A new variant of Omicron may cause a continued surge in cases in the United States

According to the Global Initiative for Sharing Influenza Data, the next wave of outbreaks in the United States may come from new subtypes BA.4 and BA.5 of the Omicron strain.

Both viruses began circulating in the United States in late March and are replacing the dominant BA.2 variant, particularly in the central United States.

Recent studies have shown that BA.4 and BA.5 can evade vaccine protection and immunity from previous infection with the new coronavirus, or cause a continued surge in new coronavirus cases in the United States.

According to the Associated Press, the U.S. government said on the 2nd local time that if the U.S. Food and Drug Administration (FDA) approves the new crown vaccine for children under the age of 5 as scheduled, it can be used as soon as June 21 for children in this age group. Get the first dose of the vaccine.

The report quoted the White House's new crown epidemic coordinator as saying that the FDA's external advisory group will meet from June 14 to 15 to evaluate the new crown vaccine prepared by Pfizer and Moderna for children under 5 years old.

Shipments to medical facilities will begin soon after FDA authorization, with the first doses likely in the next week.

The European Union approved the provision of a "Corona Recovery Fund" to Poland on the 1st local time, a decision that still needs to be confirmed by the other 26 EU member states.

According to the official website of the Polish government, European Commission President von der Leyen visited Poland on the 2nd local time and met with Polish President Duda and Prime Minister Morawiecki.

Von der Leyen said that only when the relevant measures to restore the independence of the judiciary in Poland are implemented and other conditions are met, Poland can obtain the first fund.

According to foreign media reports, this "new crown recovery fund" includes subsidized grants and cheap loans, totaling tens of billions of euros, and will be released in the next few years.

Some analysts believe that, given that Poland has always been a front-line country for comprehensive sanctions against Russia in the Russia-Ukraine conflict, the EU's approval of the fund to Poland this time is "purely a political decision".

Buckingham Palace confirmed on the 2nd that the British Prince Andrew had tested positive for the new crown virus.

According to German media reports, the German Federal Ministry of Education has called for a comprehensive new crown vaccination for school-aged children by the end of this month to prepare for the next wave of epidemics.

At the same time, it called on the German Federal Ministry of Health to ensure a rapid assessment of the epidemic prevention measures taken so far.

Japan's "Mainichi Shimbun" reported on the 2nd local time that Japanese medical institutions surveyed about 5,900 people to observe whether they had adverse reactions after receiving the first dose of Moderna's new crown vaccine.

The study found that middle-aged women between the ages of 30 and 60 were 5.3 times more likely than men to develop "Modena arm" symptoms after receiving the Moderna vaccine.

According to the report, the symptoms of "Modena's arm" are specific symptoms such as redness, swelling, pain or itching at the vaccination site.

This adverse reaction usually occurs about a week after receiving the Moderna vaccine, and the cause has not been identified.

Africa: WHO predicts that by the end of 2022, the average daily number of deaths from the new crown in Africa may drop by 94%

The WHO Regional Office for Africa said on the 2nd local time that as of now, there have been more than 11.9 million confirmed cases of the new crown on the African continent, and a total of 253,945 deaths.

According to WHO data, in 2021, the new crown epidemic will kill an average of 970 people on the African continent every day.

WHO's latest forecast model shows that by the end of 2022, the average daily death toll of the new crown on the African continent will drop by nearly 94%, or about 60 people a day die.

But if a more deadly mutant strain emerges, deaths could rise dramatically.