For its 75th anniversary, the NBA offers itself a final steeped in history, with on the one hand Golden State, which wants to extend the Stephen Curry / Klay Thompson dynasty started in 2015, on the other Boston, in search... 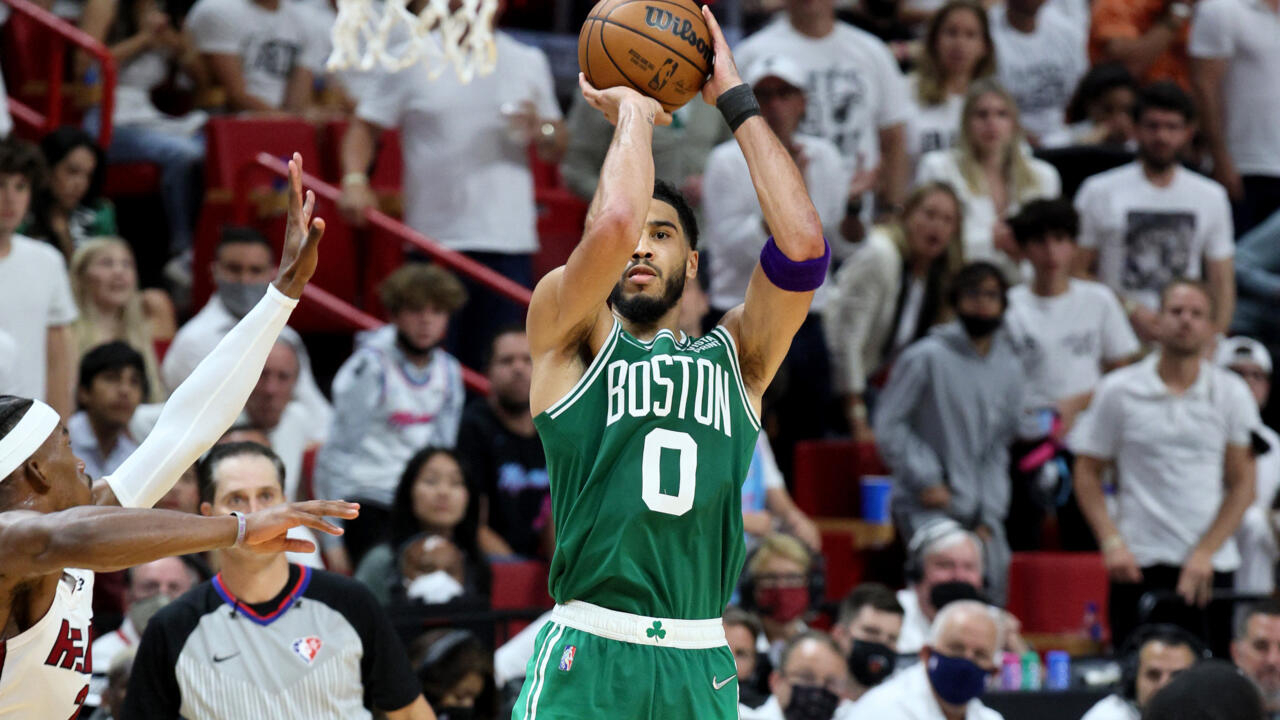 These two emblematic franchises, which will face each other on Thursday in San Francisco - the Warriors having the advantage of the floor -, for the first game of a series crowning the first to four victories, are among the pioneers of the Northern League. American basketball club, created like them in 1946.

They have accumulated no less than 23 championship titles, including 17 for Boston.

And as strange as it may seem, they only faced each other once in the final.

In 1964, at the height of their hegemony, marked by winning nine championships in a row, the C's got the better of the San Francisco Warriors, against the backdrop of the rivalry of giants Bill Russell and Wilt Chamberlain.

This time, the talented Jayson Tatum and Jaylen Brown are given the opportunity to write their own story, after other glorious veterans, Bob Cousy, John Havlicek, Larry Bird or Paul Pierce, who led the team to clover. to his most recent title, in 2008.

Warriors star Stephen Curry (d) during Game 5 of the Western Conference against Dallas on May 26, 2022 in San Francisco EZRA SHAW GETTY IMAGES/AFP

If they succeed they will offer an 18th coronation to Boston, to distance themselves from the Lakers, hated rivals who had joined them at the top of the list in 2020, after beating Miami.

Miami, who then blocked the Celtics' way to the Eastern Conference final in the Orlando bubble and from whom they took revenge on Sunday, after a decisive 7th game in Florida, the culmination of six months led to a hell train.

Because at mid-season, Boston, in negative (20 wins-21 losses), vegetated in eleventh place, out of the play-offs.

Then, under the leadership of his rookie coach Ime Udoka, an alchemy was created, strengthened by an awareness of Tatum and Brown eager to prove that they can play together, and the team to climb to 2nd position.

If the "Jay-Jay" are powerful engines in attack, the rearguard is not left out, with Marcus Smart, voted best defender in the NBA, and Robert Williams.

Not to mention the physical impact of veteran Al Horford or the substantial contribution of 6th man Derrick White.

In the play-offs, this very complete team thus swept the Brooklyn Nets of Kevin Durant, then dethroned the Milwaukee Bucks of Giannis Antetokounmpo, before defeating the Heat of the heroic Jimmy Butler.

Enough to make him the favorite for the title, according to former star Charles Barkley: "the Celtics will win the championship, because they simply have the best collective".

As a downside, the lack of experience could weigh heavily against the Warriors, who will play their sixth final in eight years.

As before them other sacred dynasties, those of the Celtics of Bill Russell, the Lakers of Jerry West then Magic Johnson, and the Bulls period Michael Jordan.

"I don't think any of our players are impressed or intimidated by this moment. We understand what awaits us, we know the opponent," assured Udoka nevertheless.

An opponent, determined to take revenge on fate, who abruptly stopped his saga in 2019, when Kevin Durant and Klay Thompson were seriously injured in the final lost against Toronto.

The crossing of the desert will have lasted two seasons.

The time that Stephen Curry fractures a hand, that the team hit rock bottom with the worst record in the League in 2019-2020, that Thompson, cursed, also ruptures an Achilles tendon after his cruciate ligaments, that the coach Steve Kerr is arming himself with patience, after Durant's departure to Brooklyn, to rebuild with young people (Andrew Wiggins, Jordan Poole...) who have now reached maturity.

The return to full light revolves around the original "big 3": the "Splash Brothers" Curry/Thompson, probably the best shooter pair in history, and Draymond Green, the "warrior" soul of the team .

Their "DNA of champions", as Kerr likes to recall, spoke in the play-offs, to dismiss Denver and Nikola Jokic, Memphis and Ja Morant, Dallas and Luka Doncic.

The program for the NBA Finals between Golden State and Boston, played in the best of seven matches, and which begins on Thursday:

NB: each series is played best of seven games, the first team to win four wins is crowned NBA champion.