At the Coubertin Foundry, a craftswoman protected by overglasses sands a bronze sculpture with a contemporary but historic appearance by its symbol: this statue of Molière will be erected on Wednesday for… 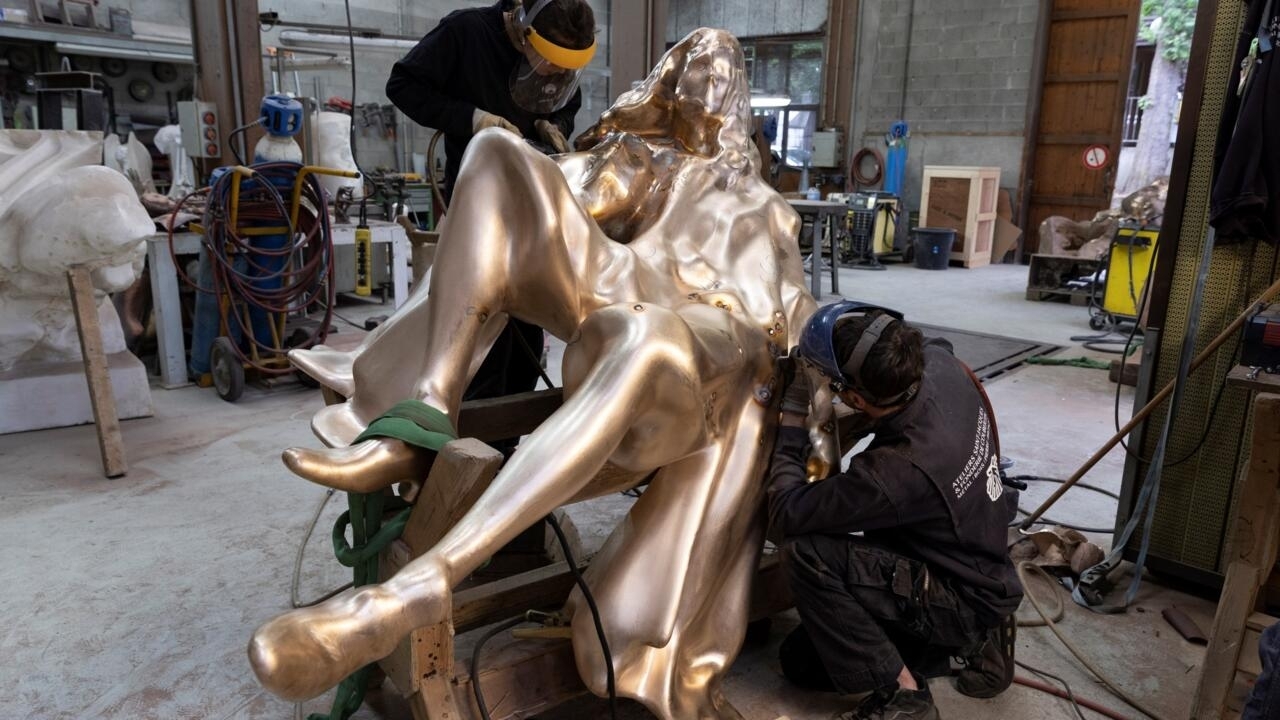 The former royal city has a famous equestrian statue of King Louis XIV in front of the castle, but none of France's best-known playwright, a protege of the same king before whom he performed many of his plays at Versailles.

It was here that he created his first version of "Tartuffe", which was quickly censored, "L'Amour Médecin", "George Dandin" and even "L'Impromptu de Versailles".

This last play will be presented as part of the "Mois Molière", the city's annual theater festival created 26 years ago to allow emerging troupes to present their version of the playwright's plays.

The mayor of the city and creator of the festival, François de Mazières, ordered this statue for the 400th anniversary of the birth of Jean-Baptiste Poquelin celebrated this year, but the idea was running through his head long before.

"When you go to Salzburg, you see Mozart everywhere, they value their history... Molière embodies French culture but also high-level popular culture," he told AFP.

Workers work on a bronze statue of Molière, at the Coubertin foundry in Saint-Rémy-les-Chevreuse, in the Yvelines, on May 15, 2022 Thomas SAMSON AFP / Archives

The statue was commissioned from the artist Xavier Veilhan, who was inspired by a sculpture visible in the hall of the Comédie-Française: that of a Molière in a seated position, with his legs stretched out and his head resting on his hand. , signed by Jean-Jacques Caffieri, 18th century sculptor.

Weighing 250 kilos for 1.80 meters, the work will be installed a few steps from the Versailles bus station, in a grove;

a wink wanted since Molière played his plays in the gardens of the castle during the royal entertainments.

It will be without a pedestal, to "honor the closeness that Molière once maintained with his audience", according to Mr. Veilhan.

At the end of May, during the chasing stage, a smell of bronze and abrasive emanates from one of the foundry workshops located in the Chevreuse Valley.

The work, still in the golden yellow color of bronze in its raw state, will ultimately be unveiled to the public in a darker shade after being patinated.

"It will certainly make Molière more present in the city, he deserves this tribute", says Christophe Berry, director of the foundry.

Produced using the technique of sand casting, "it's a very smooth, very taut model, which leaves no flaws", he specifies, before continuing his polishing.

Workers work on a bronze statue of Molière, at the Coubertin foundry in Saint-Rémy-les-Chevreuse, in the Yvelines, on May 15, 2022 Emmanuel DUNAND AFP / Archives

"In this work, unlike the restorations, we do not look at the engravings, it is the artist's version that takes precedence", explains Mr. Berry again.

"Molière here has no mustache", as can be seen in many portraits, he smiles.

The statue, the cost of which amounts to 130,000 euros, was financed by the Emerige Endowment Fund.

As for the grove, created by the architect Nicolas Gilsoul, it is supported by the city.

The Fonderie de Coubertin had already produced statues of historical figures, in particular the statue of General Charles de Gaulle near the Champs-Elysées and that of Winston Churchill, both signed by Jean Cardot.