The economic crisis has been clouding Afghanistan for years, due to poverty, conflict and drought, but the matter worsened sharply after the Taliban seized power in August 2021, when the United States and its allies froze about seven billion dollars in the country's foreign reserves, and cut off all foreign assets. 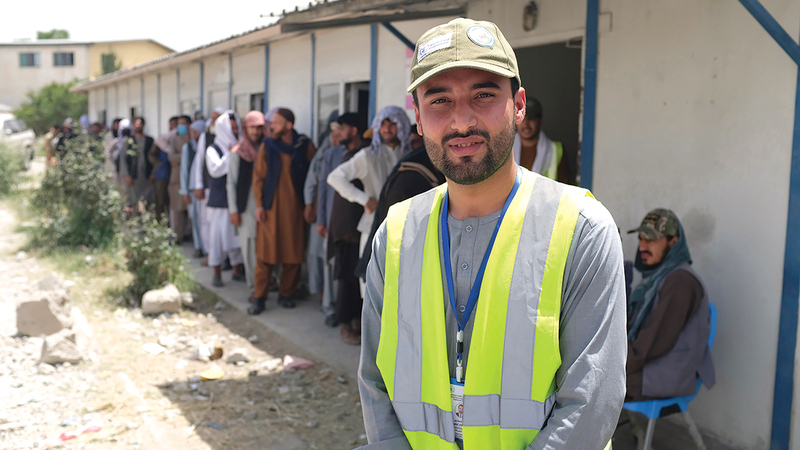 Because of cut off international funding

The economic crisis has plagued Afghanistan for years, due to poverty, conflict and drought, but the matter worsened sharply after the Taliban seized power in August 2021, when the United States and its allies froze about seven billion dollars in the country's foreign reserves and cut off international funding.

The move has crippled an economy that already depends heavily on foreign aid.

This situation has left millions of unemployed Afghan employees, who have not received their salaries from the government for a long time.

Nearly half of the population - 20 million people - suffer from acute hunger, according to a UN-backed report released this week.

There are fears that the crisis will kill more Afghans than were wiped out by the 20-year war.

"Farmers have told me ... that during decades of war, they have never had to stand in line for humanitarian assistance," says Mary Ellen McGarraty, director of the World Food Program in Afghanistan.

And she continues, "I listened to a complaint from many women, including heads of families, and widows, who were able in the past to support themselves, and who now have everything collapsed for them due to the drought and the economic crisis."

There is no more work

In Kabul and other cities, many people are starting to go hungry for the first time, standing in long queues to receive food aid.

In that queue were Fatima, whose husband could not find a job as a security officer, Aziza, who lost her job as a cleaner at the Ministry of Labor, and Azimah, a teacher.

Azmeh was not unemployed until the Taliban decided to close the girls' secondary schools.

She now teaches elementary school classes to try to make ends meet, but she hasn't received her salary for a long time.

Khatima, a widow whose husband was killed in a suicide bombing four years ago, hopes the money she receives from the World Food Program will help feed her six children.

"I used to clean people's houses, but there is no work anymore. Any house you go to and ask for work, they tell you we don't have money," she says.

"I can't feed my children anymore... We don't have cooking oil tonight, and I haven't been able to pay my rent for six months...

People are angry at the lack of jobs and have few options, including relying on aid.

"We want to work with our hands so that we can buy food with our own money," says Hajj Noor Ahmed.

The West is under increasing pressure to ease economic restrictions on Afghanistan.

Many of the people waiting for support in Khwaja Rawash, a middle-class neighborhood near Kabul International Airport, are the new poor in Afghanistan.

They were working in decent jobs before.

But now they depend on international aid to survive.

Offers her son for sale

The situation is calmer than it was on the first day of this month's aid distribution in this area, says Khalid Ahmadzai, the coordinator of the World Food Program on the site.

On May 11, people climbed walls to enter.

The World Food Program says it helped 3,000 families in that area on the first day.

Last Sunday, about 700 people waited patiently for up to two hours before their ID cards were checked and they received the aid.

He adds, "A few days ago, a woman came to me and said: I want to sell you my son for 16,000 Afghani currency. She was crying, and I had the worst feeling I've ever experienced in my life."

He added, "Her son is three or four years old. Her feeling of hunger and the economic situation she is in have forced her to offer her son for sale."

Armed Taliban fighters, who once attacked the Afghan capital, are now providing security at the food distribution center.

Their presence highlights a cruel irony expressed by teacher Azimah, who is in the queue and who is receiving help for the first time in her life.

She says the security situation has improved since the Taliban seized Kabul last year: "The suicide bombings have stopped, but the economic situation for people has become worse."

People are angry at the lack of jobs and have few options, including relying on aid.

The West is under increasing pressure to ease economic restrictions on Afghanistan.

The UN envoy to Kabul, Deborah Lyons, urged the Security Council in March to cooperate with the Taliban and prevent the collapse of the Afghan economy.