Protests in the West Bank in rejection of the "Flags March" in Jerusalem.. Shtayyeh: Israel crossed the red lines with its aggression against Al-Aqsa

The Palestinian Prime Minister said that Israel crossed all the red lines in Jerusalem, after tens of thousands of settlers organized yesterday the “flags march.” On the other hand, protests took place today and yesterday in the West Bank, rejecting the Israeli march. 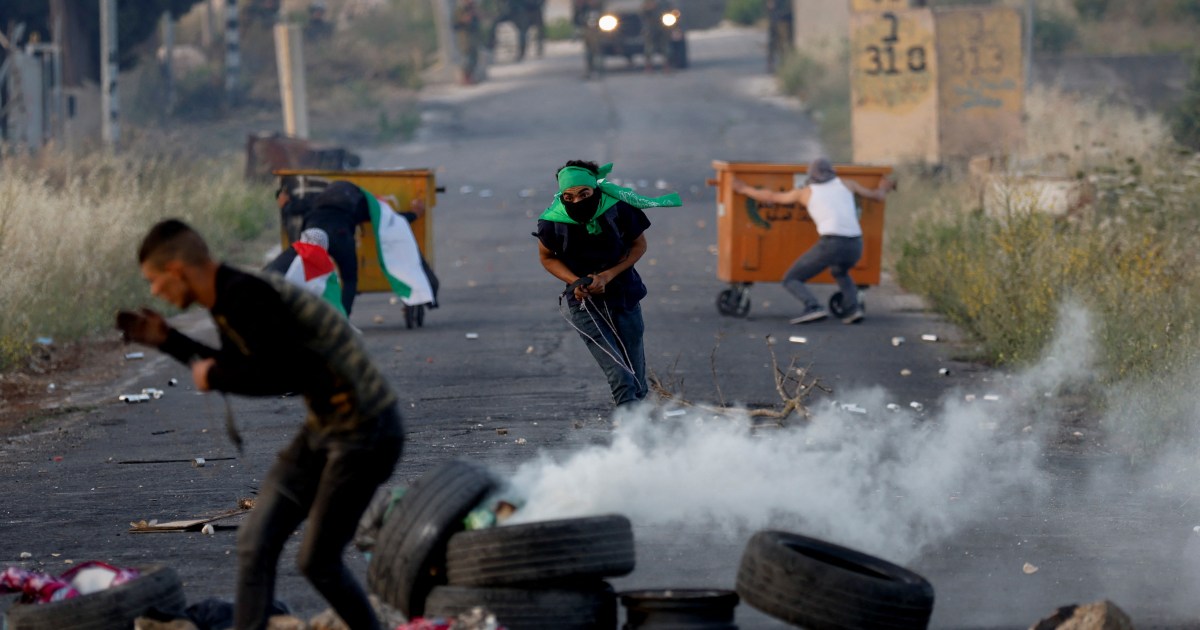 Today, Monday, Palestinian Prime Minister Muhammad Shtayyeh said that Israel has crossed all the red lines in Jerusalem, after tens of thousands of settlers organized yesterday a "flags march" on the anniversary of the occupation of the eastern part of the city, and the march caused confrontations between Jerusalemites on the one hand, and the occupation forces and settlers, and also took place. Clashes and protests in the West Bank following the organization of the march.

Shtayyeh added at the start of his government’s weekly meeting in Ramallah, “Israel needed more than 3,000 police and soldiers, and about 40,000 settlers, to raise a flag in the streets of Jerusalem,” stressing that Tel Aviv could not “break the will of the Palestinian people and impose sovereignty on them and subjugate them. One thing and imposing sovereignty is another.

According to the Palestinian Prime Minister, what happened yesterday evening in the city of Jerusalem and Al-Aqsa Mosque is a "major and dangerous shift in the cycle of conflict with the occupation, and it needs a serious pause and a real review of the changes taking place before the eyes of the world," explaining that Israel seeks to change the historical situation of Al-Aqsa Mosque.

Prime Minister of Palestine: Israel needed more than 3,000 police and soldiers, and about 40,000 settlers, to raise a flag in the streets of Jerusalem.

The Palestinian Red Crescent reported that its crews dealt yesterday with dozens of injuries with rubber bullets and beatings during the attack by the occupation police and settlers on Palestinians in the Old City and its vicinity in Jerusalem.

He added that his crews dealt with more than 160 injuries in the West Bank, twenty of them with live bullets.

The occupation forces closed the Bab al-Amoud area in the Old City with iron mounds, following clashes with Palestinian youths, after a group of settlers carrying Israeli flags arrived to participate in the flags march called by extremist Jewish groups.

Anadolu Agency quoted eyewitnesses as saying that the participants in the "flags march" chanted insulting slogans of the Prophet Muhammad, may God bless him and grant him peace, and chanted "Death to the Arabs."

The "Flags March" was preceded by hundreds of settlers storming Al-Aqsa Mosque yesterday morning, during which they performed their prayers and spread out on the ground, in what is known to them as "epic prostration" and others raised the Israeli flags.

To denounce what is known as the flags' march in support of Jerusalem, a student vigil was organized this morning at Birzeit University in the West Bank.

And the Governor of Jerusalem, Adnan Ghaith, had warned - in an interview yesterday with Al-Jazeera - that the occupation seeks to ignite a religious war in the region, by continuing to attack Islamic sanctities in Jerusalem, and the director of the blessed Al-Aqsa Mosque Sheikh Omar Al-Kiswani said - in statements to Al-Jazeera - that what is happening from Incursions and attacks by the occupying forces and a number of extremist settlers "will not change the Islamic nature of Al-Aqsa Mosque."

Protest demonstrations were launched in separate areas of the West Bank yesterday, rejecting the "Flags' March."

The confrontations with the occupation also extended to Nablus and Hebron, causing dozens of injuries.

It was remarkable that the Palestinian flags were raised extensively to prove the Arab, Islamic and Christian identity of the city of Jerusalem.

Ismail Haniyeh, head of the Political Bureau of the Islamic Resistance Movement (Hamas), said that what happened in Jerusalem and Al-Aqsa Mosque in what is known as the “Flags’ March” will not be forgiven, considering what happened as “an attack on every Muslim and free person in this world.” He added - in statements quoted by his media advisor, Taher. Al-Nono - that "the resistance will continue its path until the uprooting of the occupation from the land of Palestine."

He affirmed the refusal of the Hamas political bureau to give any pledge or guarantees to any party regarding what the situation inside occupied Palestine might be like.

In the same context, the International Union of Muslim Scholars yesterday evening called on the Islamic nation and its leaders to defend Al-Aqsa Mosque, in light of the settlers' incursions and provocations. Efforts to put an end to the occupiers’ attacks on Al-Aqsa and Jerusalemites.”

On the other hand, Israeli Prime Minister Naftali Bennett congratulated the participants in the "flags march", describing it as a traditional flags march, and said that Jerusalem would remain the eternal and unified capital of Israel, as he put it.

Bennett had said - during a government meeting - that what he called raising the Israeli flag in the Israeli capital is normal.

In the Hebron governorate, settlers organized a new march today with the Israeli flags. The march toured the Kiryat Arba settlement in the governorate, one day after the “flags march” in occupied Jerusalem.

In response to the statement of the Prime Minister of Israel, the Palestinian Foreign Ministry said that Bennett boasts that Israel has become a state of terrorism and its incubator, and a statement of the ministry considered that “what we saw yesterday is a new confirmation that the occupying state deals with Jewish terrorism and its organizations as part of its components and its official system.”