Previously, three were injured: a strong explosion occurred in the center of Melitopol

On the morning of May 30, an explosion occurred in the center of Melitopol. According to an RT correspondent, a Mercedes car with Ukrainian numbers was blown up, parked near the main city square, where the administration of Melitopol now works. Immediately after the explosion, the place of emergency was cordoned off, according to preliminary data, three people were injured. In the main council of the military-civilian administration of the Zaporozhye region, the incident was called a terrorist attack, emphasizing that the Zelensky regime hates peaceful life in the liberated territories. 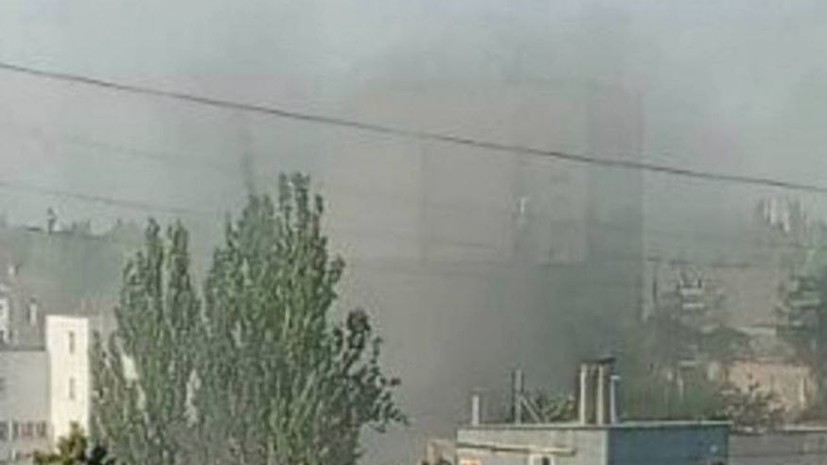 On the morning of May 30, a strong explosion occurred in the center of Melitopol.

According to Vladimir Rogov, a member of the main council of the military-civilian administration of the Zaporozhye region, the incident is a terrorist attack.

“Such terrorist attacks will not stop as long as the terrorist entity UGIL (Ukrainian state of Ivano-Frankivsk and Lvov) exists.

The Zelensky regime hates peaceful life in Melitopol and other liberated territories,” he wrote on Telegram.

RT correspondent Ilya Vasyunin in the stream "Letuchka" said that a Mercedes car with Ukrainian numbers was blown up, parked near the main city square and the House of Culture, where the administration of Melitopol now works.

“The sound was such that it blocked the ears.

Several dozen people in camouflage have already cordoned off this place.

This is the first time this has happened in Melitopol since the Russian troops entered here,” he said.

According to a RIA Novosti source in the city administration, as a result of the explosion, according to preliminary data, three people were injured.

In recent days, the Ukrainian military has twice tried to break through the defense line in the Kherson region, but they were defeated and suffered very heavy losses, Kirill Stremousov, deputy head of the military-civilian administration of the region, told RIA Novosti.

According to him, the Ukrainian army, as a result of the first attempt alone, lost about 200 people and 20 pieces of equipment.

“They tried to break through and seize the bridgehead and cut off the Kherson and Zaporozhye regions,” he said.

Stremousov also said that passage to the Kherson region was opened from the regions of Ukraine controlled by the Kyiv regime, but it was unsafe due to hostilities.

“The Ukrainian military is shooting in the back to all those who are moving today.

Our checkpoints on the demarcation line are not against the arrival of residents of the Kherson region, who are now returning home en masse, but we warn them to be careful, because the Ukrainian army is shooting civilians who are returning to the territory of the Kherson region, ”said the deputy head of the military-civilian administration of the region.

In addition, the region switched to the Russian telephone code “+7”, a Crimean mobile operator under the Win mobile brand started operating in the Kherson region.

“Sim-cards of mobile communication are already on sale.

A lot of people buy SIM cards from a new operator.

We are already directly communicating from the Kherson region with any regions of the Russian Federation,” Stremousov added.

The liberation of the Donetsk and Lugansk People's Republics, recognized by the Russian Federation as independent states, "is an unconditional priority," Russian Foreign Minister Sergei Lavrov said in an interview with the French TV channel TF1.

“In relation to other territories of Ukraine where a military operation is being carried out, it is up to the residents of these regions to decide their future.

They must decide for themselves in what environment they will continue to exist: in the one created by President Zelensky (ban on Russian education, the media, culture, the use of the Russian language in everyday life) or in another, where they will be able to raise their children the way they want, and not Zelensky and his team,” he stressed.

The head of the Foreign Ministry also noted that the Russian leadership is ready for dialogue with the West on any issues: "Putin never refuses his colleagues who ask for a telephone conversation or a personal meeting."

“We do not impose ourselves on anyone and hear how all EU leaders, without exception, publicly accuse Russia of aggression, use rather militant vocabulary.

If behind this vocabulary there is a desire to solve the problems that have caused the current crisis in the field of European security, we will always be ready for a conversation, ”Lavrov explained.

Dmitry Kalashnikov, head of the Republican Bureau of Forensic Medical Examination of the DPR Ministry of Health, said that more than 100 children had died in the eight years of the armed conflict on the territory of the Donetsk People's Republic.

“The number is very sad.

According to my information, 117 children have died in the territory of the DPR and the Donetsk region over the years, these are children under 18 years old.

So, out of 117 children, 35 have died since February of this year, ”RIA Novosti quotes him.

He also noted that unexploded shells became the reason for the death of most minors this year.