Dozens of Palestinians were injured and arrested after the flags march.. Hamas: What happened in Jerusalem will not be forgiven

Ismail Haniyeh, head of the political bureau of the Islamic Resistance Movement (Hamas), said that what happened in Jerusalem and Al-Aqsa Mosque on Sunday in what is known as the “flags march” will not be forgiven, considering what happened as “an attack on every Muslim and free person.” 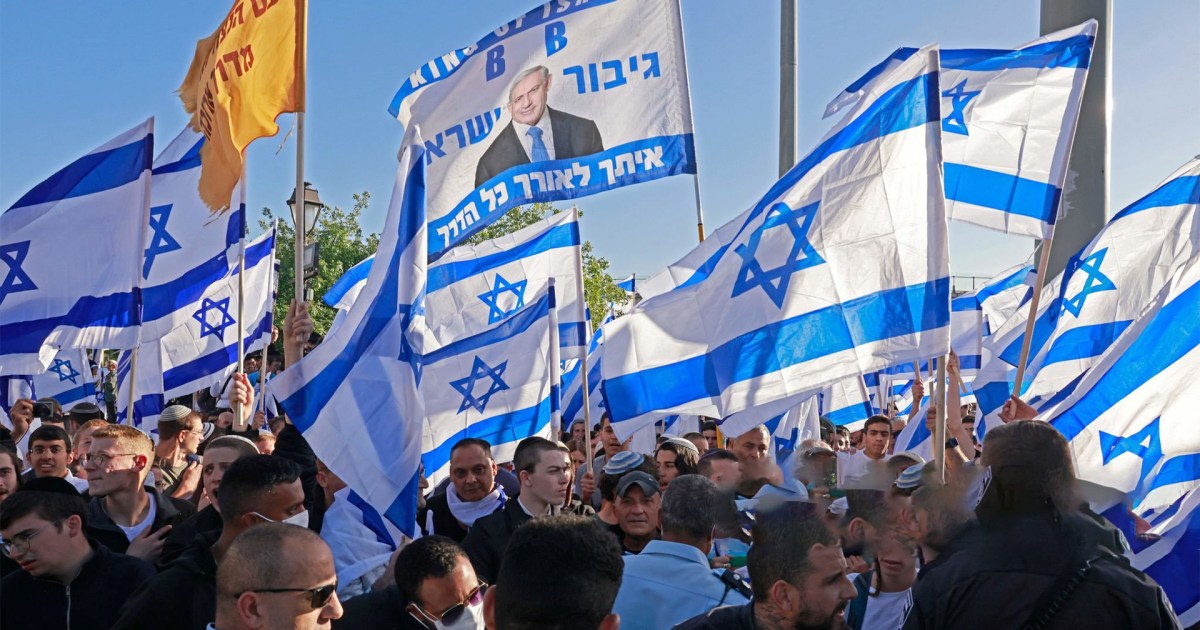 Ismail Haniyeh, head of the political bureau of the Islamic Resistance Movement (Hamas), said that what happened in Jerusalem and Al-Aqsa Mosque on Sunday in what is known as the “flags march” will not be forgiven, considering what happened as “an attack on every Muslim and free person in this world.”

Haniyeh added, in statements quoted by his media advisor, Taher Al-Nono, that "the resistance will continue its path until the occupation is uprooted from the land of Palestine."

He affirmed the movement's refusal to give any pledge or guarantees to any party regarding what the situation inside occupied Palestine might be like.

He said that some parties (he did not mention them) began contacting the leader of the movement "in order to work to contain the situation, and not to deteriorate matters more than what happened, according to them."

Commenting on the march as well, Hamas spokesman Hazem Qassem said that the city of Jerusalem was and will remain Palestinian and Arab, stressing that "no brute force or a passing strange settler can change this eternal truth."

Qassem added that "the Palestinian people are the owner of the right, the history and the place, and they will continue to defend their right until the Zionist settlers are expelled, and they will protect the identity of this holy city in an open and continuous battle with the Zionist occupation."

Earlier on Sunday evening, tens of thousands of settlers organized the so-called "flags march" in Jerusalem, to celebrate the anniversary of the occupation of the eastern part of the city, according to the Hebrew calendar, which they call "the unification of Jerusalem."

The march sparked confrontations that resulted in the injury of dozens of Palestinians and the arrest of others.

It was preceded by hundreds of Jewish settlers storming Al-Aqsa Mosque, where they performed their prayers and stretched on the ground, in what is known to them as “epic prostration”, and others raised the Israeli flags.

Tens of thousands of Israelis participated in the march - which concluded on Sunday evening, as it started from the Bab al-Amud area to the Old City of Jerusalem, ending at the Al-Buraq Wall, which the Jews call the "Wailing Wall".

Anadolu Agency quoted eyewitnesses as confirming that the participants in the march chanted insulting slogans of the Prophet Muhammad, may God bless him and grant him peace, and chanted "Death to the Arabs."

And 79 Palestinians were injured as a result of the repression and assault by the Israeli police and settlers inside and around the Old City of Jerusalem, according to the Palestinian Red Crescent Society.

The Israeli newspaper "Maariv" quoted the police as saying that they arrested at least 50 Palestinians, during the "Flags March" events.

In the West Bank, 145 Palestinians were injured during clashes with the Israeli army, which erupted in separate locations in response to the march.

The march was preceded by hundreds of settlers storming Al-Aqsa Mosque on Sunday morning, and in the period after the noon prayer.

The Department of Islamic Endowments in Jerusalem said that the number of settlers storming Al-Aqsa Mosque reached 1,687.

Settlers attacked Palestinian homes and properties in the Sheikh Jarrah neighborhood of Jerusalem, injuring a number of them after they clashed with the neighborhood's residents.

The reporter stated that the occupation forces also violently suppressed Palestinian marches on more than one axis at the Beit El checkpoint between Ramallah and Al-Bireh, and clashes erupted in Nablus and Hebron.

Israeli Prime Minister Naftali Bennett congratulated everyone who participated in the march, stressing that Jerusalem "will remain our eternal capital," as he put it.

Bennett considered that raising the Israeli flag in what he called "the Israeli capital" is normal, and called on the participants in the march to celebrate "responsibility and respect", and stressed that Jerusalem will not be divided.

In response to the Israeli prime minister, the Palestinian presidency said in a statement that "Bennett is playing with fire," adding that his statements would not give legitimacy to the occupation of Jerusalem.

The Palestinian presidency added that East Jerusalem, with its Islamic and Christian holy sites, will remain the eternal capital of Palestine.

For his part, the Governor of Jerusalem, Adnan Ghaith, warned - in an interview with Al-Jazeera - that the occupation seeks to ignite a religious war in the region, by continuing to attack Islamic sanctities in Jerusalem.

He said that the significant escalation in the size of the Israeli attacks on Al-Aqsa Mosque and Jerusalemites "would not have reached this level, had it not been for the rush of some Arab countries to normalization."

Ghaith considered that the level of Arab and Islamic reactions to what happened yesterday in Jerusalem was below the required level.

In turn, the director of the blessed Al-Aqsa Mosque, Sheikh Omar Al-Kiswani, said that the ongoing incursions and attacks by the occupation forces and a number of extremist settlers "will not change the Islamic nature of Al-Aqsa Mosque."

Al-Kiswani warned - in statements to Al-Jazeera - that the message of the occupation today is that it wants to move the battle inside Al-Aqsa Mosque.

Palestinian Prime Minister Muhammad Shtayyeh also said that the settlers' march and attacks are condemned and will have serious consequences, calling on the international community and all human rights organizations to intervene to stop the Israeli violations.

The Palestinian Foreign Ministry considered that what Jerusalem was subjected to yesterday against its citizens and sanctities is "state terrorism, colonialism and organized apartheid," stressing that the Israeli Prime Minister's bragging about the flags' march is "a systematic disregard for the international community and United Nations resolutions."

The Supreme Presidential Committee for the Follow-up of Church Affairs in Palestine condemned the occupation’s allowing settlers to organize provocative marches and perform Talmudic rituals in the blessed Al-Aqsa Mosque.

The committee said - in a statement - that the occupation government is leading the region to a dangerous escalation, in violation of all international laws and covenants.

She pointed out that "the extremist occupation government seeks to impose ethnic cleansing against the Palestinian people, and to Judaize the Holy City."