Russia will be able to export significant volumes of fertilizers and agricultural products if the relevant sanctions restrictions are lifted, President Vladimir Putin said during a telephone conversation with Turkish President Recep Tayyip Erdogan. As Putin noted, there are problems on the world food market that have arisen due to a number of short-sighted decisions by Western countries. The leaders also discussed the situation around Ukraine, including issues of ensuring safe navigation in the Black and Azov Seas. In this regard, Putin noted Moscow's readiness, in coordination with Ankara, to facilitate the unimpeded maritime transit of goods, including the export of grain from Ukrainian ports. 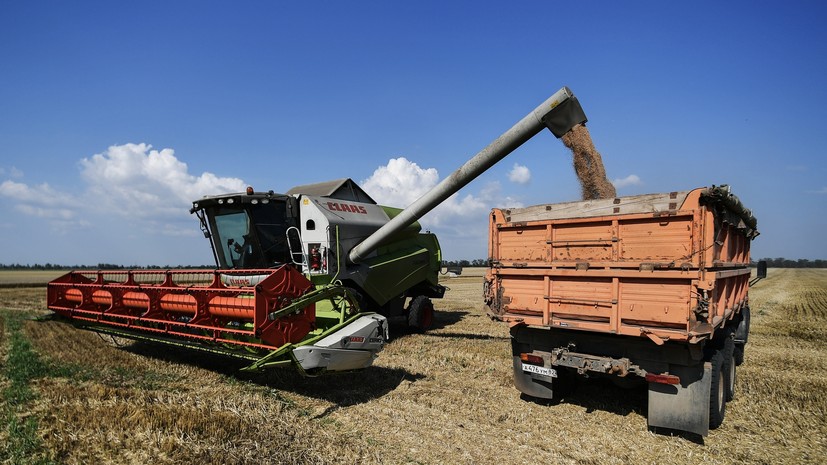 President Vladimir Putin confirmed Russia's readiness to export significant volumes of agricultural products and fertilizers in the event that restrictions imposed earlier are lifted from Moscow.

According to the Kremlin press service, this issue was raised during a telephone conversation between the Russian leader and Turkish President Recep Tayyip Erdogan.

“In light of the problems in the global food market that have arisen as a result of the short-sighted financial and economic policies of Western states, it has been confirmed that Russia can export significant volumes of fertilizers and agricultural products if the relevant anti-Russian sanctions restrictions are lifted,” the release says.

The heads of state also discussed the issues of navigation safety that have arisen in the Black Sea region.

“When discussing the situation in Ukraine, the emphasis was placed on ensuring safe navigation in the Black and Azov seas, eliminating the mine threat in their waters,” the Kremlin’s press service said.

At the same time, Putin noted the readiness of the Russian side to facilitate the unhindered maritime transit of goods in coordination with Turkish partners.

It is noted that this also applies to the export of grain from Ukrainian ports.

Earlier, the Russian Foreign Ministry noted that Moscow, as a responsible participant in the global food market, intends to continue to conscientiously fulfill its obligations under international contracts in terms of export supplies of agricultural products, fertilizers, energy carriers and other critical products.

At the same time, the official representative of the Foreign Ministry, Maria Zakharova, stressed that the jump in prices for agricultural products occurred back in 2020 and is not the result of a special operation in Ukraine, as a number of Western politicians are trying to present.

“The COVID-19 pandemic has led to serious disruptions in the supply chains and a significant increase in the cost of food transportation services ... The main catalyst for the existing negative trends was anti-Russian sanctions by the West, which led to a rupture of ties in the field of global logistics and transport infrastructure” , - Zakharova said on May 28.

Also on russian.rt.com, Putin told Draghi that Russia will help overcome the food crisis when sanctions are lifted

As noted in the Foreign Ministry, the totality of measures taken against Russia led to a 40% reduction in the shipment of Russian fertilizers to the EU countries in March 2022.

Against this backdrop, the prices of wheat, corn and barley, which were already at record highs, still rose.

The ministry cites UN data, according to which, by the end of March 2022, the cost of food products exceeded last year's figure by 24%, and in the EU countries, the price of wheat soared by 70% over the year.

In turn, the office of the Turkish leader reported that Erdogan, during a conversation with Putin on May 30, called for the early establishment of a dialogue on a peaceful settlement in Ukraine.

The Turkish leader announced his readiness to organize a meeting in Istanbul with the participation of representatives of Russia, Ukraine and the UN.

Along with this, Turkey expressed its desire to take part in the work of the settlement mechanism if the parties reach an agreement.

During the conversation, in addition to the possible resumption of the negotiation process, the project of creating a safe corridor for the export of Ukrainian agricultural products by sea was discussed.

The previous series of telephone conversations between Putin and Erdogan took place on April 26 and 28.

As reported in the Kremlin press service, the leaders spoke about the progress of the special operation and continued coordination to ensure the safe exit of Turkish ships from ports in the Black Sea.

During the second conversation, the leaders discussed the humanitarian aspects of the situation in Ukraine and Donbass.

Erdogan last spoke to the Ukrainian leader on April 24.

During that conversation, the Turkish president confirmed that Ankara is ready to facilitate negotiations between Moscow and Kyiv.

It should be noted that Turkey has already provided a platform for the Russian-Ukrainian dialogue: on March 29, the delegations of the two countries met in Istanbul.

During this round of negotiations, the Ukrainian side submitted its proposals for a settlement in writing, among which was the neutral and non-bloc status of the state, the refusal to host foreign military bases, the deployment of foreign troops and the production and storage of weapons of mass destruction.

However, in the following weeks, the dialogue between the Russian Federation and Ukraine ceased.

Moscow has repeatedly emphasized that the sabotage of the negotiation process occurs at the suggestion of Kyiv.

At the same time, the Russian side is ready to resume dialogue, Vladimir Putin said during a conversation with French President Emmanuel Macron and German Chancellor Olaf Scholz on May 28.

“Special attention is paid to the state of affairs on the negotiation track, which is frozen due to the fault of Kyiv.

Vladimir Putin confirmed the openness of the Russian side to the resumption of dialogue," the meeting was reported.