L1: at the end of the nightmare, Saint-Etienne plunges back into Ligue 2

Saint-Etienne plunges again: beaten Sunday by Auxerre in a penalty shoot-out (5-4), ASSE is relegated to Ligue 2, 18 years after its rise in the elite, epilogue of a nightmarish season which… 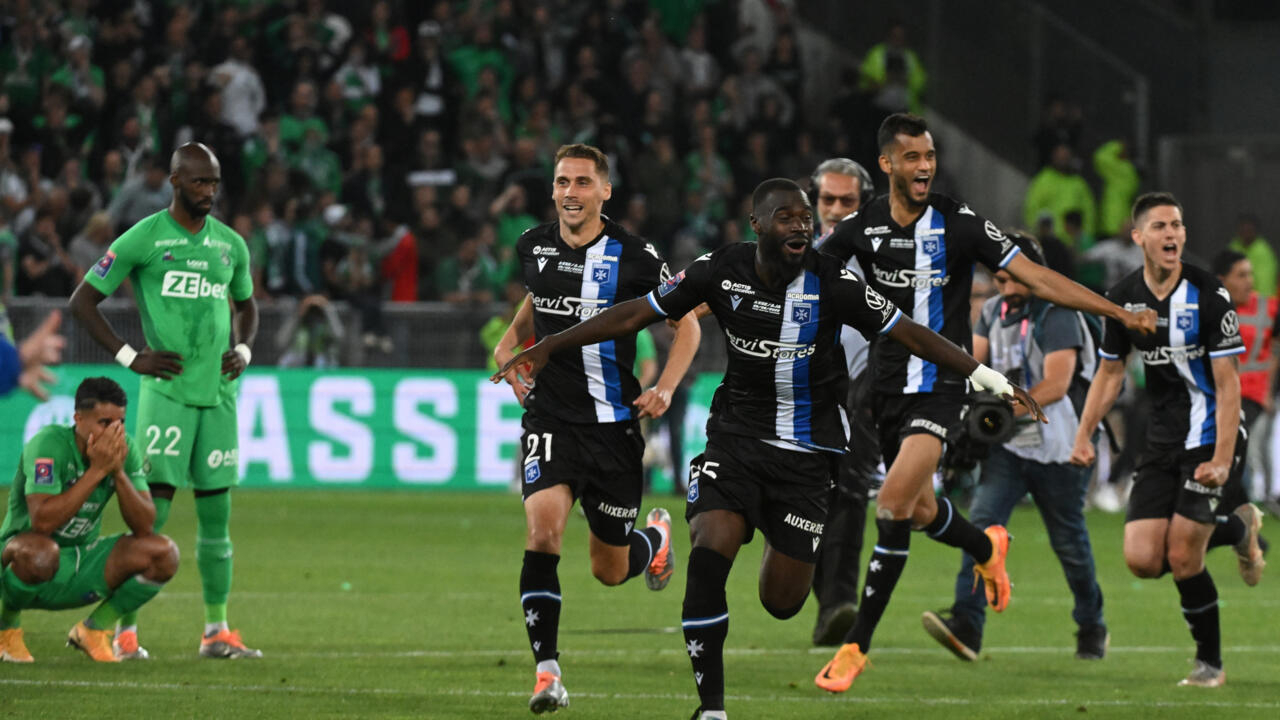 Last in the truce with twelve points, the Greens took twenty with coach Pascal Dupraz who succeeded Claude Puel, sacked on December 5 after a rout at home against Rennes (5-0), but this burst, and the play-off place snatched from the last day, were not enough.

And after a frustrating draw at Auxerre on Thursday (1-1), Sunday's return play-off at the Geoffroy-Guichard stadium went all the way to the penalty shootout, the two teams again being neutralized with the same score at the end regulation time and overtime.

The penalty shootout, won 5-4 by the Burgundians, condemned the Greens to find the L2 which they had left with relief in 2004.

Back on the lower floor, ASSE will have to rethink its economic and social model while managing a context of mistrust maintained by ultra supporters whose indiscipline has several times been sanctioned with matches behind closed doors, total or partial.

The invasion of the lawn on Sunday evening after the last successful shot by the Auxerrois, and horizontal smoke bombs towards the benches, while the players in the match rushed to the locker rooms, once again illustrated the tensions between the club and some of its supporters.

Supporters invaded the lawn of the Geoffroy-Guichard stadium and threw horizontal smoke bombs after the barrage lost Sunday evening by Saint-Étienne against Auxerre (1-1 / 1-1, 5 tab to 4), which relegated the Greens in Ligue 2. JEAN-PHILIPPE KSIAZEK AFP

With a budget of around 70 million euros this season, Saint-Etienne in Ligue 2 is a behemoth that is descending, and with it 360 employees, the vast majority of whom are full-time or part-time permanent employees.

Either a lifestyle to be reduced by at least half: 100 to 150 layoffs are expected on non-sports staff.

Sportingly, around twenty players (including the reserve) are free on June 30 and among them the highest salaries.

The contracts re-discussed in recent months include a relegation clause which results in a 50% wage reduction.

Saint-Etienne players, dejected after their defeat on penalties (1-1, 5-4 tab) against Auxerre, during the L1 / L2 return barrage, which sends the Greens to Ligue 2 JEAN-PHILIPPE KSIAZEK AFP

But it will be necessary to rebuild a Ligue 2 team by replacing the starters and recruiting a new coach, with the expected departure of Pascal Dupraz, who failed in his rescue mission.

If the expenses, wages in particular, will be down, the receipts will also be and up to 50 to 60%: less TV rights, spectators, merchandising, hospitality receipts, etc.

And the financial aid for relegation will only partially cushion the blow, as will the money expected from CVC, the new shareholder of the commercial subsidiary of French football, with a windfall lower than that which the club would have received if it s was maintained (16.5 M EUR for a descending team, against 33 M EUR in L1).

Already in a precarious financial situation, ASSE is becoming even more fragile.

A chaos for which the two shareholders, Bernard Caïazzo and Roland Romeyer, are largely responsible.

But they do not seem to be in a hurry to sell their shares despite the announced sale of the club in 2018 and again in 2021.

The co-presidents of Saint-Etienne Roland Romeyer (g) and Bernard Caiazzo, during the opening ceremony of the first museum dedicated to a football club, December 20, 2013 PHILIPPE MERLE AFP / Archives

Recently, an American billionaire, David Blitzer, would have lined up to buy the club, while all the candidates who have presented themselves so far have been rejected, even the most serious.

At the head of the club since 2004, the year of the return to the elite (2003 for Caïazzo now residing in Dubai and who has not come to Saint-Etienne for two years), the two men, unnatural partners, have not never laid the foundations of a stable structure.

The reality is undoubtedly that Saint-Etienne could have come back down to Ligue 2 long before this season.

And the prospects on the lower floor look all the more complicated as there will only be two moves from L2 to L1 next season, to reduce the elite contingent to 18 clubs.