A fatal penalty shootout, an invasion of the field with fire from smoke bombs and scuffles outside its Geoffroy-Guichard stadium: Saint-Étienne, beaten 1 to 1 (5-4 pens) by Auxerre… 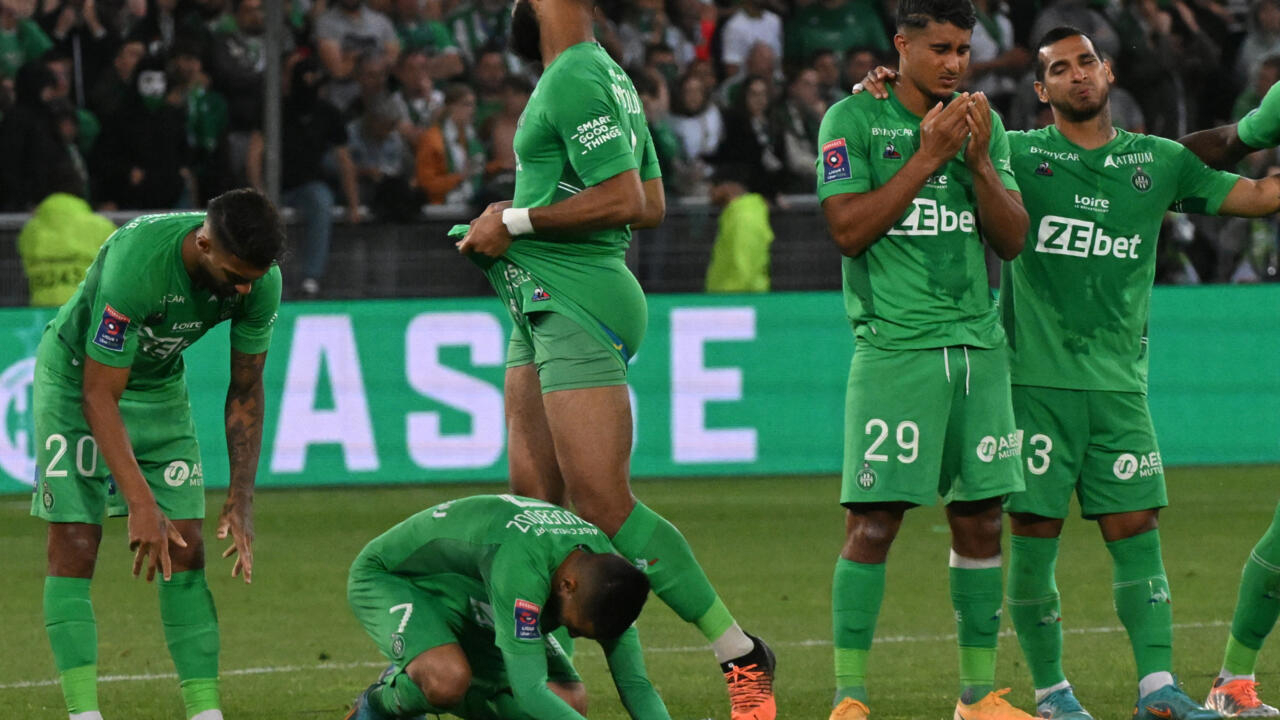 As soon as the last successful shot on goal by the Auxerrois Birama Touré, synonymous with victory for the Burgundians who returned to Ligue 1 after ten years of absence, the field was invaded by thousands of angry supporters.

Some sent pyrotechnic devices towards the official platform protected by the police.

The Saint-Etienne players, surrounded by the stewards, immediately rushed, like the other players in the match, to the locker room.

Supporters invaded the lawn of the Geoffroy-Guichard stadium and threw horizontal smoke bombs after the L1/L2 return barrage lost on May 29, 2022 by Saint-Étienne against Auxerre (1-1/1-1, 5 pens). 4), which relegates the Greens to Ligue 2 JEAN-PHILIPPE KSIAZEK AFP

"After the match, I freaked out because I took tear gas canisters, like my players," commented Auxerre coach Jean-Marc Furlan.

"We counted ourselves to find out if there were any missing. These incidents are very sad."

The Geoffroy-Guichard stadium is again at risk of serious sanctions even though it is on probation because it is a repeat offender of this type of incident.

On Sunday, the Snella stand was closed following incidents during the reception of Monaco on April 23, a sanction that did not curb the incidents at the end of the match.

The security forces also entered the field and fired tear gas to disperse the crowd, while panic movements shook the stands.

The scuffles continued outside the stadium, requiring the use of tear gas and a water-thrower, said the Loire prefecture, which estimated at 11:25 p.m. at "around 200 the number of supporters continuing their abuses around the stadium".

The balance sheet stands at two wounded among the police and 17 among the supporters, "including three who were taken to the hospital for control", indicates in a press release the prefect of the Loire Catherine Séguin who condemns "these unacceptable, irresponsible and unworthy acts".

The mayor of Saint-Etienne Gaël Perdriau expressed his "sadness" caused by the "descent into Ligue 2 of ASSE" and condemned the "dangerous acts with direct fire from smoke bombs aimed at the public (...), as well as damage and acts of vandalism".

Relegation punishes a calamitous season for Saint-Étienne, who had snatched the right to play in the play-offs in extremis after a draw in Nantes (1-1) on the 38th and last day of the championship.

Over the season, ASSE only totaled 32 points, which could, in most cases, have sent it directly to Ligue 2.

The hoped-for miracle with the arrival of Pascal Dupraz, who had already contributed to the rescues of Toulouse (2016) or Évian-Thonon-Gaillard (2014), did not give the expected effect.

Of the last eight matches, Saint-Étienne has not won any with four defeats and four draws, the last of which ended in a disastrous penalty shootout.

The next club sale

However, the Greens had obtained an interesting draw in the first leg (1-1) last Thursday at the Abbé-Deschamps stadium, with an away goal by Zaydou Youssouf which placed ASSE in a favorable position.

But on Sunday, Hamza Sakhi gave Auxerre a deserved advantage by scoring with a header after receiving a cross delivered from the right wing by Mathias Autret (51).

Mahdi Camara equalized with a header after Enzo Crivelli's first header from a corner (76), completing a good period for the Stéphanois who were perfectly supported until the end of the penalty shootout by 32,000 supporters.

The joy of the Stéphanois, after having equalized from a corner against Auxerre, during the L1/L2 return play-off, on May 29, 2022 at the Stade Geoffroy-Guichard JEAN-PHILIPPE KSIAZEK AFP

On the Auxerrois side, goalkeeper Donovan Léon was decisive in his team's victory, successfully intervening in front of Denis Bouanga at the start of the match (2, 7).

Subsequently, the Icaun goalkeeper intervened on a shot from Adil Aouchiche (31) while Bouanga, despite a good position, missed the target when receiving a cross from Romain Hamouma (46).

And he magnificently diverted the first shot on goal from Ryad Boudebouz, the only failure of the shooters during the session.

On the Green side, as soon as the relegation was completed, a press release from the shareholders announced the club's next sale.

Roland Romeyer and Bernard Caïazzo promise "important news concerning the future of the club and ours", adding that "an essential page in our life will turn".

In the greatest confusion.