Colombia chooses a president in a turbulent context

Six years after the signing of a historic peace agreement with the Farc guerrillas, a left-wing candidate Gustavo Petro is leading the polls for the first round and could win the second.… 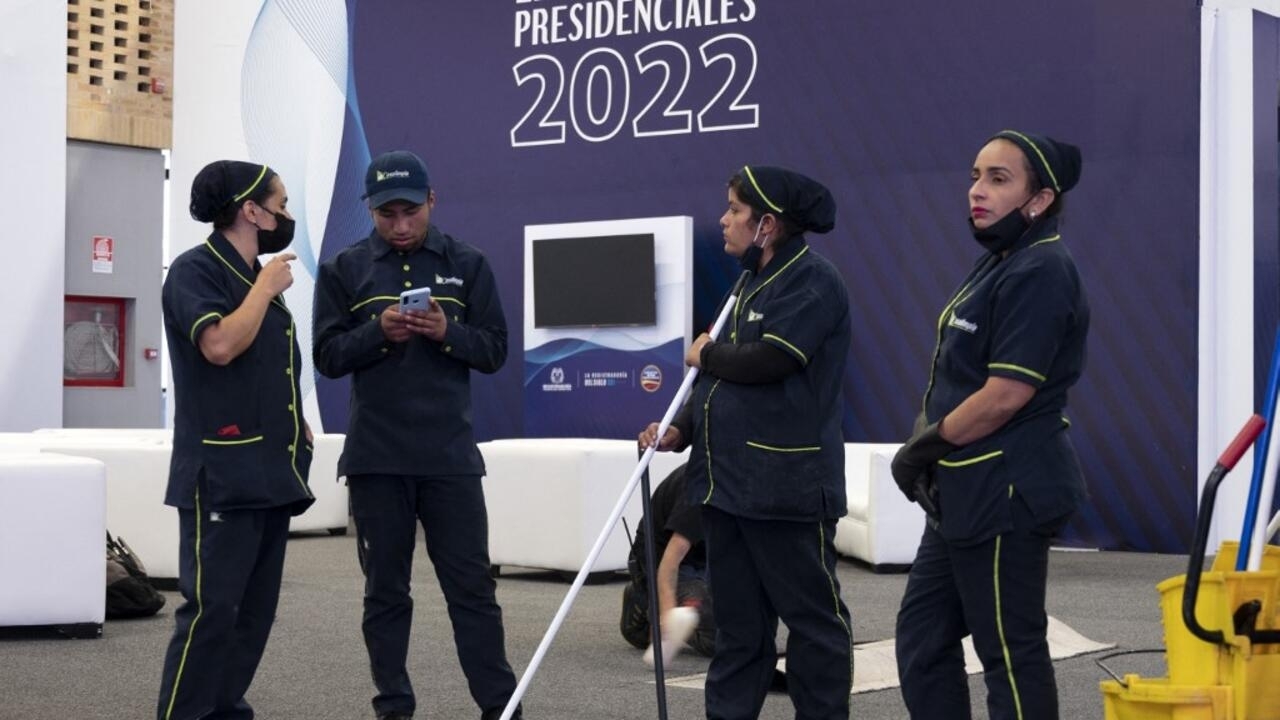 Colombia chooses a president in a turbulent context

Preparation of the presidential press room at the Corferias convention center in Bogota on May 28, 2022. AFP - YURI CORTEZ

Six years after the signing of a historic peace agreement with the Farc guerrillas, a left-wing candidate Gustavo Petro is leading the polls for the first round and could win the second.

Nearly 39 million voters are expected in 12,000 polling stations, where they will have the choice between six candidates, to appoint a replacement for the unpopular outgoing conservative president Ivan Duque, who cannot stand for re-election.

The election is taking place in a climate of intense political tension, after four years without major fundamental reform marked by the pandemic, a deep recession, massive demonstrations in the cities and an increase in violence by armed groups in the countryside.

From campaigns abandoned to drug traffickers

The first issue of this election,

our correspondent in Bogota,

, deciphers this peace agreement signed in 2016. The state so far has not kept its promises, particularly in terms of agrarian reform.

The second issue, closely linked to the first, is violence, which is on the rise again in the countryside.

Armed groups are being reconstituted, all of which live off drug trafficking.

Thus, in the village of Corinto, the visitor is warned by graffiti on the walls of the houses: “

roll down your window or you will be shot

And they want to know who's coming.

As the government did not offer, as provided for in the agreements, subsidies for alternative crops, people were forced to start illicit crops...

What will the next government do to pacify the country?

There are no easy solutions.

The pandemic has widened the already very wide gap between rich and poor.

And she emptied the state coffers.

The choice of continuity or change

All the candidates have promised social policies, but the question is how to finance them.

The right wants to attract investment, particularly in the hydrocarbons sector.

The left wants an ambitious tax reform, the promise to play the card of the energy transition which supposes to stop in the long term to exploit the oil and the coal of the country.

This means that the development model is also at stake in this election.

►Also read: Presidential election in Colombia: a historic vote and a thirst for change

He wants to maintain the economic system and the very close relationship with law enforcement and the armed forces.

And he wants to continue the fight against drug trafficking in the same way as it exists now.

On the side of change, the political scientist ranks Rodolfo Hernandez.

He too is a right-wing candidate.

But he advocates a change by making the fight against corruption the central axis.

He does not claim to want to change the Colombian economy.

What he wants to change is the way the country is run politically.

Its objective is not only to change the country's political class so that elected officials are more representative of the great diversity of citizens, but also to significantly change the economy, security and relations between the different social strata. that we have here

For the first time in the country's history, a left-wing candidate is in the best position to win the presidential election.

Gustavo Petro, a former guerrilla fighter, former mayor of Bogota and former senator, is leading the way in the polls.

Risks of fraud and violence

The campaign was marked by threats against this 62-year-old economist and his running mate, Afro-Colombian Francia Marquez.

Tensions in the country are high and the risk of fraud and irregularities is real, observes RFI special envoy

The past few days have shown a "

high level of violence and misinformation (...) on social networks and the media

", alarmed the Electoral Observation Mission (MOE), a coalition of NGOs.

Diego Carvajal is a student in Cali preparing to vote this Sunday for Gustavo Petro.

A lot of people are voting, but not all of those votes will be counted.

If the vote does not suit those in power, it will disappear, be declared invalid or miscounted.

Diego does not trust the electoral system.

Gilberto Muñoz Coronado, former mayor of Corinto in the department of Cauca.

Traditional parties give money, especially to community leaders, so that they then buy voters' votes.

Some people live off of it.

At each election they negotiate.

Moreover, access to the ballot boxes is not guaranteed for the entire Colombian population.

Many armed groups seek to prevent voters from going to the polls by threatening them directly or by creating a climate of violence on election day.

According to the Electoral Observation Mission, the risk of violence and fraud is very high for this election.

It is a real threat to democracy

According to the Colombian ombudsman, the ballot is at risk in at least 300 municipalities, in 27 out of 32 departments.

For Guzman, the low turnout in the last presidential elections, which rarely exceeded 55%, is a wake-up call: many Colombians no longer believe in the democratic process.

," says the National Register, in charge of organizing the ballot, which will take place from 8 a.m. to 4 p.m. local time.

The government has deployed 220,000 additional police and military throughout the country, making a total of 300,000 men who will be in charge of securing the vote, supervised by 690,000 assessors.