“A burden for the European Union”: how Zelensky continues to seek Ukraine's membership in the EU

President of Ukraine Volodymyr Zelensky has demanded that Prime Minister of the Netherlands Mark Rutte "say it straight" whether there is a place for Kyiv in the European Union. According to Zelensky, the country's authorities "must and want" to carry out the necessary reforms for joining the EU. He also acknowledged that the country has a number of problems, but stressed that they are also present in the states of the Union. Earlier, Rutte noted that the chances of Ukraine to receive the status of a candidate for EU membership in the near future are small. Analysts believe that Zelensky’s statements are intended mainly for the Ukrainian layman: in this way, the president is trying to revive his authority and demonstrate that he is making every effort to realize Kyiv’s European aspirations. 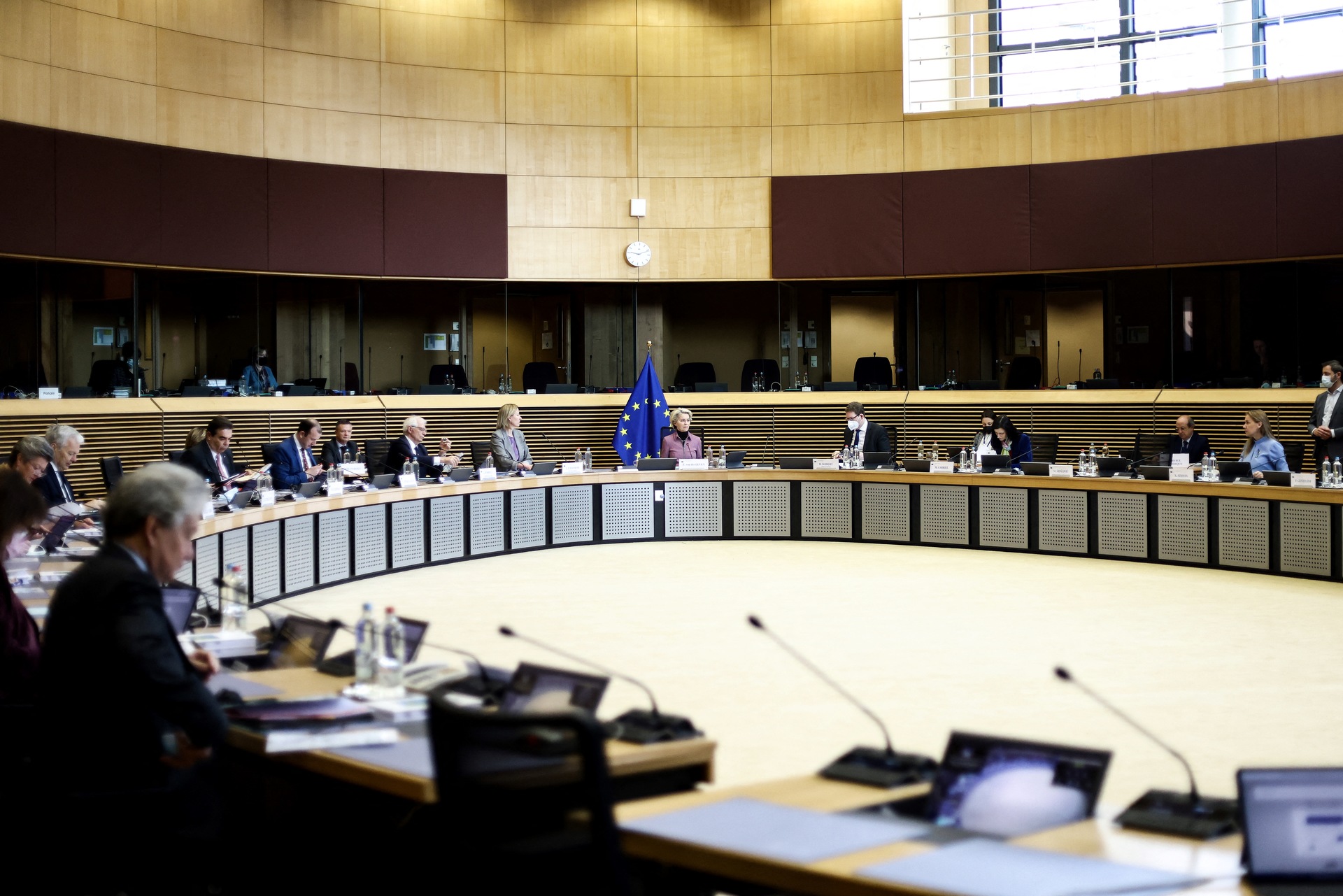 Ukrainian leader Volodymyr Zelensky demanded that Prime Minister of the Netherlands Mark Rutte "say straight" whether Ukraine has a place in the European Union.

Zelensky spoke about this in an interview with the Dutch TV channel NOS.

) frankly:“ If you think that we have no place in the EU, then you must say so directly, ”RIA Novosti quoted him as saying.

Zelensky stressed that Ukraine is ready to become a candidate for EU membership.

“We must and want to carry out the necessary reforms for this ... Yes, we have problems, but they exist in many countries, including the EU countries,” the president said.

Earlier, the Prime Minister of the Netherlands did not appreciate the chances of the Ukrainian side to soon become a candidate for EU membership, as reported by local media, citing his speech in parliament.

According to Rutte, before the start of the Russian special operation, Ukraine was “very far” from such a situation.

In addition, according to the Dutch politician, granting Kyiv the status of a candidate for EU membership would be unfair to the Balkan countries, which are still waiting for it.

As Rutte stressed, the words of European leaders who call Ukraine part of the European family were more of an “emotional” than a “legal” statement.

Moscow responded to the arguments of the head of the government of the Netherlands.

“The prime minister of the Netherlands spent a lot of words explaining the obvious: promising does not mean getting married.

In the outdated version - to marry, ”wrote the official representative of the Russian Foreign Ministry, Maria Zakharova, in her Telegram channel.

Recall that at the end of February, the President of Ukraine called on Brussels to immediately resolve the issue of his country's entry into the European Union "under a new special procedure" and signed the corresponding application.

The European Commission confirmed its receipt, but at the same time emphasized that before a decision is made in Ukraine, hostilities must be completed.

Then Kyiv filled out and handed over to Brussels a questionnaire for acquiring the status of a candidate for EU membership, after which the European Commission can recommend to the Council of the European Union to initiate the start of a discussion on Ukraine's inclusion in the association.

For her part, von der Leyen noted that the EC intends to work hard on reviewing the questionnaire submitted by Kyiv in order to make a decision in June.

Later, on May 22, Zelensky said that Ukraine hopes to receive the status of a candidate member of the European Union in June of this year.

However, on the same day, the French Foreign Ministry admitted that the process of Ukraine's accession to the EU could take up to 20 years.

This was stated by Clement Bon, Minister Delegate to the French Foreign Ministry for European Affairs, on Radio J. According to him, it would be wrong to say that Ukraine could become part of the association in six months, a year or two.

After that, Deputy Head of the Office of the Ukrainian President Igor Zhovkva noted that Kyiv is counting on the unity of the European Union “around a political decision” on granting Ukraine the status of a candidate for EU membership at the next meeting of the European Council on June 23-24, 2022.

“This will be an important strategic decision to ensure the security of the European continent,” he stressed.

According to experts, the Kyiv regime is actually trying to push as many EU member states as possible to confirm the importance of Ukraine as part of the association, but at the same time there are those in the union who do not share this point of view.

“Zelensky’s appeal to Rutte is, to put it mildly, bewildering.

From his current position, making any claims is unreasonable and futile.

The Dutch prime minister is unlikely to refute his previous statements and talk about the real prospects for Ukraine's membership in the EU, ”said Vladimir Olenchenko, senior researcher at the Center for European Studies at IMEMO RAS, in an interview with RT.

According to him, such statements by the Ukrainian leader are more designed "for an internal user."

“Zelensky's ardor can be addressed to associates who felt that his authority was declining.

He wants to fix it with such unceremonious attacks on Rutte.

This idea could well have been pointed out to Zelensky in Washington,” the expert admitted.

From his point of view, those analogies that Zelensky draws, trying to somehow associate Ukraine with the EU, look incorrect.

“The level of problems experienced by Kyiv and Brussels cannot be compared.

The challenges are completely different both in scope and content.

If we are talking about the EU countries, they have difficulties in finding development prospects.

And in Ukraine, these are the problems of degradation of power, the economy and the country as a whole.

Kyiv has no potential for independent development, it expects that the EU will fully take it on allowance, ”the analyst is sure.

As Olenchenko noted, despite Brussels' loud statements about Ukraine as part of the European family, the leading EU countries understand that this state is now more of a "burden for the European Union."

“The EU sponsor countries are trying to formulate their unwillingness to accept Ukraine into the association as politically correct as possible.

But there are, for example, the Baltic states, which will argue that Kyiv must be accepted, otherwise, in their opinion, some damage will be done to the Western world, ”the expert noted.

According to Pavel Feldman, deputy director of the RUDN Institute for Strategic Studies and Forecasts, Zelensky wants to demonstrate with his current rhetoric that he is doing everything possible for Ukraine to join the EU.

“He is playing it safe in case someone wants to accuse him of insufficient efforts to achieve this goal.

When this clearly does not happen in the foreseeable future, he will say that he did everything he could, and the fault lies with the European partners who refused, ”the analyst explained in a comment to RT.

At the same time, the head of Ukraine still expects that the leading countries of Europe will turn a blind eye to the many problems of the republic "in view of the military function that it now performs," ​​Feldman believes.

“But, as practice shows, Brussels is in no hurry to do this.

The founding countries of the EU, the developed states of Europe are even prejudiced against the Eastern European members of the EU.

They clearly do not want to include Ukraine in the association, which will be the closest satellite of Poland.

The European authorities will wait for the outcome of the current events in Ukraine, and there, perhaps, the problem itself will be removed from the agenda, ”the expert argues.

At the same time, as Feldman noted, Brussels is trying to “save face” for the world community by talking about Ukraine's future membership in the association.

“Ukraine is fed with promises, but in fact they don’t want to see it in the ranks of the EU.

At the level of rhetoric, European leaders call Kyiv a member of the European family, but in reality they do nothing in this direction.

I note that the loudest statements were made precisely when Western politicians had already written off Ukraine as a sovereign state, ”concluded the analyst.