President Yoon Seok-yeol's love for Kennedy has a unique twist. In June last year, at the first public appearance since the resignation of the Prosecutor General, President Yun Seok-yeol said, "A country is revealed not only by the people it produces, but also by the people it remembers." John F. 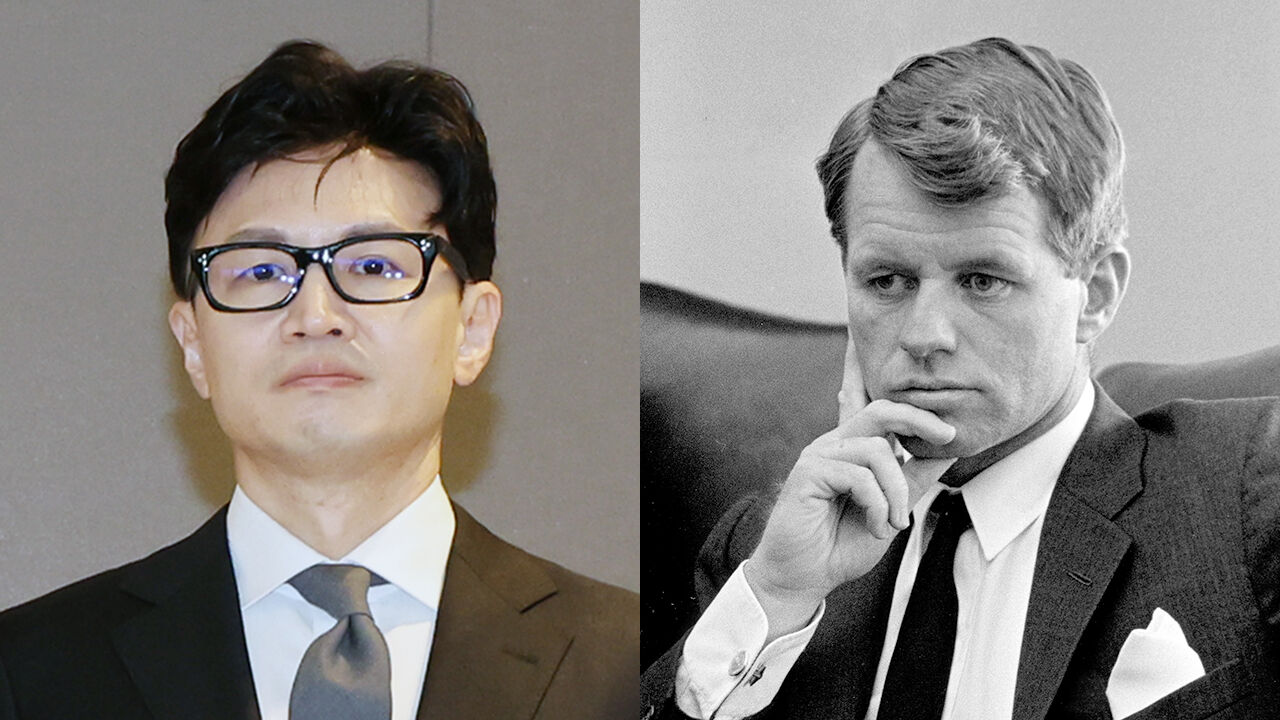 President Yoon Seok-yeol's love for Kennedy has a unique twist.

In June last year, at the first public appearance since the resignation of the Prosecutor General, President Yun Seok-yeol said, "A country is revealed not only by the people it produces, but also by the people it remembers." Quoting President John F. Kennedy.

The Attorney General also quoted President Kennedy's inaugural address during the training of the new prosecutor.

President Kennedy's influence was felt strongly in the May 18 commemorative speech, which has recently become a hot topic.

During the speech, President Yun Seok-yeol added a sentence that was not in the pre-scriptural text, "All Korean citizens are Gwangju citizens." This was taken from President Kennedy's 1963 Berlin speech, "We are all Berliners."

However, there is a passage in which President Yun Seok-yeol's 'Kennedy hommage' stands out more.

The appointment of Minister of Justice Han Dong-hoon, the most striking, dramatic, and controversial among the appointments made by President Yoon Seok-yeol, seems to be the highlight of 'Kennedy Homage'.

What Dong-Hoon Han and Robert Kennedy have in common

First of all, we can find commonalities between Robert Kennedy and Han Dong-hoon in terms of the president's 'brother'.

Some may think that it is unreasonable to tie up Secretary Robert Kennedy, the younger brother of President John F. Kennedy, and President Yoon Seok-yeol, and Minister Han Dong-hoon, who is not mixed with a drop of blood.

However, if you are familiar with the relationship between Han Dong-hoon and Yoon Seok-yeol, it will be difficult to deny that the two are as close as real brothers.

In fact, Minister Han Dong-hoon used to call President Yoon Seok-yeol "brother" when he was serving in the prosecution.

If there is a 13-year difference like the two of them, it will not be easy to find a relationship as close as Yoon Seok-yeol and Han Dong-hoon among siblings.

There is another thing in common.

He is a hot-tempered infighter who does hard things for his 'brother', and as a result, he makes many enemies.

Robert Kennedy was the campaign manager who directed Kennedy's campaign.

John Edgar Hoover, who held intelligence on high-ranking government officials, including President Kennedy, was also the head of the political bodyguard, who held down the FBI Director as well as other political opponents of the president.

He is especially known for his harsh treatment of bureaucrats and businessmen who challenged the president.

To the Deputy Secretary of State, who mentioned the failure of the Cuban invasion in the face of President Kennedy, he said, "This is the most pointless and useless bullshit I've ever heard. You guys are so desperate for your sassy self that you're afraid to do anything. All you want to do is tell the president. The only thing left is to dump the whole thing."

As justice minister, he made many enemies while leading investigations into unions, the mafia, and the steel industry.

Minister Han Dong-hoon not only took on tough tasks when President Yoon Seok-yeol investigated the National Nongdan case, the former President Lee Myung-bak case, the Judicial Nongdan case, and the former Minister of Homeland, but as a result, he made many enemies, but he is a character who does not hesitate to fight. has a similar aspect to

Another common point is that he is designated as the second-in-command of the government beyond the Minister of Justice.

American historian James Hilty describes Robert Kennedy as "a campaign director, attorney general, overseer of public officials, custodian of sponsors, chief adviser, and protector of his brother", and that he had been referred to by any previous government. No other person has secured direct access to the president and exercised undoubtedly powerful executive power than Robert Kennedy.

Even during the Cuban missile crisis, which reached the brink of nuclear war, President Kennedy consulted his 'brother', Robert Kennedy, at the most important moment.

The special envoy to the Soviet ambassador to deliver a message to Khshov was also Justice Minister Robert Kennedy.

The media overtly called Robert Kennedy a "second man", and in some cases described it as "the Kennedys" decision, as if the two co-run the government.

It seems to overlap with the case of Minister Han Dong-hoon, who is evaluated as a 'communication spirit'.

The similarity between the two men also drew strong criticism when the Minister of Justice was appointed.

Even 60 years ago, opposition to the appointment of the president's younger brother as justice minister was not small.

Most of the media outlets strongly criticized it as a charitable act.

There were also concerns that the legal profession was insufficient or too young to become the Minister of Justice.

President Kennedy joked, "I don't know if it would be so wrong to let [my brother] go out and get some legal experience before doing real legal practice."

This, too, does not seem to be much different from the situation facing Minister Han Dong-hoon.

It is difficult to say definitively until President Yoon personally explains it, but it is not difficult to guess.

This may be because Robert Kennedy, who was appointed with much criticism for his special relationship with the President, is still regarded as the best Attorney General in American history.

Why is Robert Kennedy considered the greatest Attorney General of all time?

It's not because he took over the bureaucracy on behalf of his 'brother', the president, or maximized the powers of the Justice Department.

It's not because he pressured the president's enemies through his investigation.

(All of these things are actually what Robert Kennedy did.) It was because he used his powerful powers as the president's closest aide and attorney general to solve problems that emerged as the most important issues in American society at the time.

In particular, he persuaded his brother to support the black civil rights movement until he gave up political support in the South, the strong base of the American Democratic Party for 100 years after the Civil War, and sent Justice Department personnel to the South to protect students from attacks by white supremacists. This is the biggest reason Robert Kennedy is still remembered as the great Attorney General.

As depicted in the movie The Godfather, it is considered one of Robert Kennedy's great achievements to start a full-scale war against the mafia, which is suspected of having a strong influence on political relations at the time and even contributing to the election of President Kennedy.

What will Han Dong-hoon choose?

In that case, Minister Han Dong-hoon will have to play a role beyond appointing prosecutors who were demoted from the previous government's "belief in fairness" to key positions and thoroughly investigating the cases that were suspended for unknown reasons.

As the Minister of Justice, if he is only respected by people with specific political opinions, he cannot escape the evaluation that he is only the chief of political security for the president.

Rather, even if a situation arises that goes against the expectations of those who are passionate about Minister Han Dong-hoon, if we address the issues posed to our society head-on, we will be evaluated as a great justice minister like Robert Kennedy, free from the controversy at the time of appointment. .

It is up to Minister Han Dong-hoon to decide whether he will remain an idol of a certain political force or become the great justice minister that will go down in history.

There is one more thing to keep in mind.

Robert Kennedy, one of the great justice ministers, is also being evaluated for a lot of abuse of his authority as a minister by current standards.

At the time of the Kennedy government, before the Vietnam War and the 'Watergate' incident, the media's surveillance and criticism of the government's abuse of authority was not as sharp as it is now.

There was also a time when it was customary not to report on the private life or unofficial remarks of the president or his aides.

While it is important to be courageous in solving critical issues, it means that Minister Han Dong-hoon, who is serving as Justice Minister in South Korea in the 2020s rather than the 1960s, needs to apply himself with far more stringent standards than Robert Kennedy when it comes to exercising his powers.

This is also the reason why we should take the media's surveillance and criticism seriously.

In the end, the success or failure of the Yun Seok-yeol administration depended in large part on Minister Han Dong-hoon.