C1: The 14th coronation of the implacable Real Madrid against Liverpool

Eternal and unsinkable, Real Madrid maintained its European legend on Saturday by winning its fourteenth Champions League at the expense of Liverpool (1-0), dominating but defeated, after a… 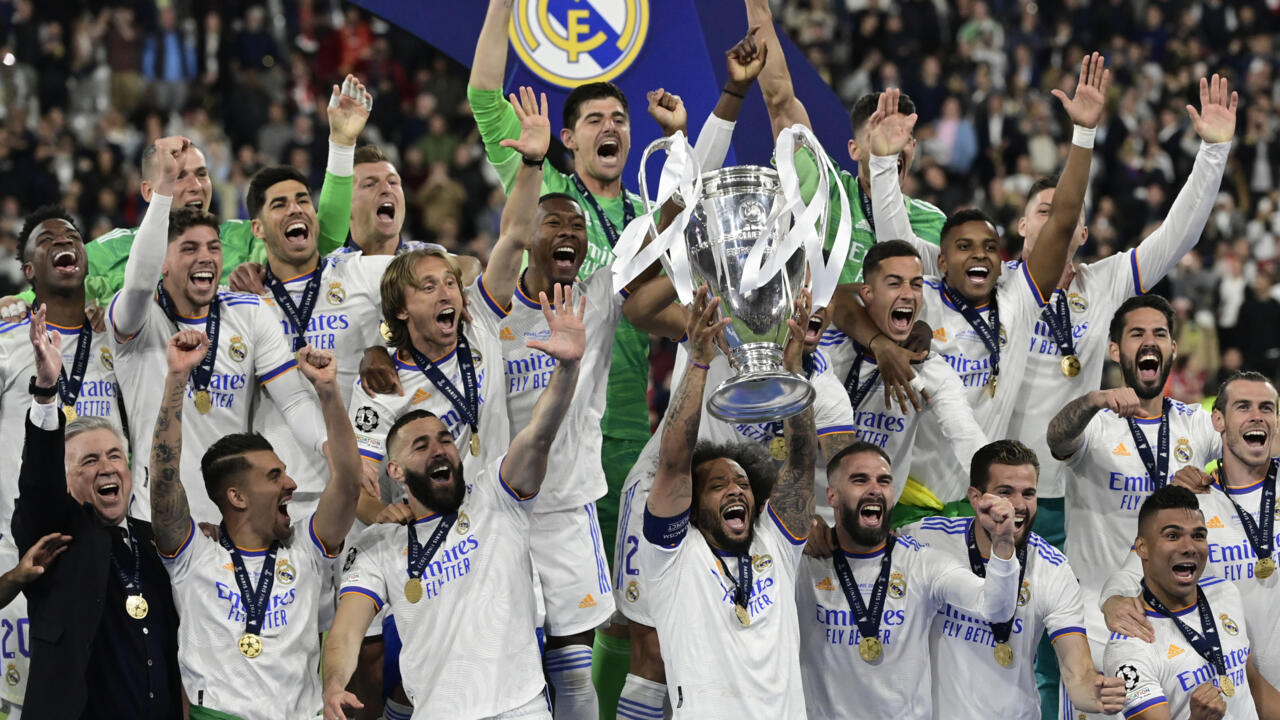 A huge game from Thibaut Courtois in goal and a goal from Vinicius (59th) were enough for the "Merengues" to win a long closed final, less crazy than the previous rounds.

Real Madrid Brazilian striker Vinicius Junior opens the scoring against Liverpool in the European Cup final on May 28, 2022 at the Stade de France in Saint-Denis Thomas COEX AFP

In Saint-Denis, we especially saw the defenders shine, with a beautiful duel between Dani Carvajal and Luis Diaz or a big game from Ibrahima Konaté, full of authority but defeated for his first C1 final.

Karim Benzema won his fifth out of five.

He did not score, a goal having been disallowed for offside by the French referee Clément Turpin (43rd), but the top scorer of the C1 (15 goals) this season scored decisive points for the Ballon d' Gold, beating his rivals Mohamed Salah and Sadio Mané.

The joy of Karim Benzema, after the victory, 1-0 against Liverpool, in the final of the Champions League, on May 28, 2022 at the Stade de France in Saint-Denis Anne-Christine POUJOULAT AFP

This is the first for young French internationals Ferland Mendy and Eduardo Camavinga.

The Real institution now has twice as many C1 (14) as its first pursuer on the list, AC Milan (7).

The "White House" has reinstalled its hegemony over European football.

The fifth for Benzema

But the Raul generation (1998, 2000, 2002) had given Real a lead before the "Decima", already conquered by Carlo Ancelotti during his first visit (2014) then the hat-trick of the team coached by Zinédine Zidane.

Marcelo and Luka Modric come, like "Benz", to win a fifth C1, one unit from the record of Francisco Gento, who lifted the first six of Real.

The joy of the Italian coach of Real Madrid, after the victory, 1-0 against Liverpool, in the final of the European Cup, on May 28, 2022 at the Stade de France in Saint-Denis Anne-Christine POUJOULAT AFP

In Liverpool, Jürgen Klopp is still far from these figures.

After having "learned the hard way" by "losing a lot of finals", he was starting to win, that of C1 2019 against Tottenham (2-0), the two English cups this season, but his famous "gegenpressing" (counter-pressing ) did not stifle the "veterans" (the word is from Ancelotti) of Real.

Liverpool did not lift their 7th C1 and lost again against Real, like in 2018 (3-1), a loss that hurts after falling by one point to second place for the title, which remained at Man City.

Mohamed Salah has lost another final, after that of the African Cup with Egypt as well as the play-off to go to the World Cup, both times against Senegal with his teammate Sadio Mané.

Real Madrid's Belgian goalkeeper Thibaut Courtois, congratulated by his teammates, after saving his side against Liverpool's Egyptian midfielder Mohamed Salah in the European Cup final on May 28 at the Stade de France in Saint -Denis Paul ELLIS AFP

The dominating Liverpool machine cracked on its weak point, behind Trent Alexander-Arnold, who did not control Vinicius at the far post, scorer on a deep cross from Federico Valverde (59th).

It was only Real's second dangerous move of the game.

On the first, Clément Turpin had to judge a complex action, assisted by the video.

The game director finally refused a goal to Karim Benzema, offside, on an action where Fabinho nevertheless perhaps puts the N.9 in play by touching the ball (43rd).

Real Madrid striker Karim Benzema scores a goal against Liverpool, ultimately disallowed after viewing the VAR, in the European Cup final on May 28, 2022 at the Stade de France in Saint-Denis Thomas COEX AFP

Before, Liverpool had been a little more threatening, but soft, in the predictable round of observation of a final.

The kick-off, delayed 36 minutes to wait for Liverpool supporters slowed down by controls, seemed to be delayed by another quarter of an hour as nothing happened until a shot from Mohamed Salah was blocked. by Thibaut Courtois (16th)

Then the Belgian goalkeeper deflected a strike from Sadio Mané on the post, escaping with a jerk from the marking of three defenders (21st).

After Vinicius' goal, the Reds dominated more clearly, Courtois relaxed again against Salah (64th, 69th) and sickened him by taking out a powerful strike from the Egyptian (83rd).

The last team to beat Real in the European Cup final was Liverpool (1-0), but that was in 1981. The king of Europe is back.