US $40 billion in aid to Ukraine, who gets fat? Unexpected consequences!

China News Service, May 27 (Reporter Meng Xiangjun) Unprecedented! U.S. President Biden recently signed the largest aid package for Ukraine to date, which will allocate $39.8 billion to Ukraine. In March, the U.S. Congress has approved more than 13 billion US dollars in aid to Ukraine, and this time, the total amount has reached more than 53 billion US dollars.   According to the U.S. Congressi 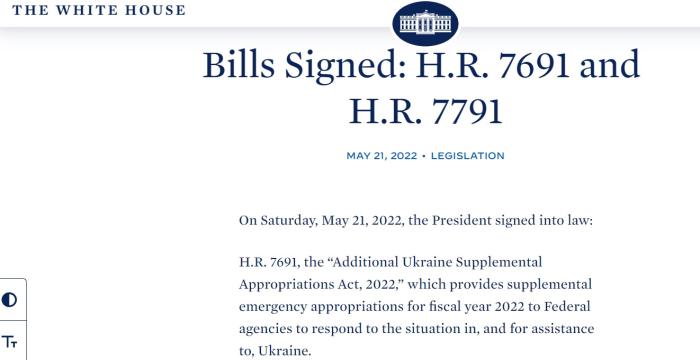 U.S. President Biden recently signed the largest aid package for Ukraine to date, which will allocate $39.8 billion to Ukraine.

According to the U.S. Congressional Research Service, this figure has exceeded the total amount of foreign aid provided by the United States in 2019.

However, the plan was heavily criticized from the outset.

What's the mystery in this?

The White House website shows that on May 21, President Biden signed the additional aid bill for Ukraine.

[How to distribute huge sums of money?

Previously, the White House, the U.S. State Department and the Defense Department urged the Ukrainian aid bill to be passed as soon as possible, warning that the aid funds for Ukraine would be exhausted on May 19.

After some bargaining, in fact, the 39.8 billion U.S. dollars in aid to Ukraine agreed by the U.S. Congress was $6.8 billion more than the $33 billion in funding proposed by Biden.

How will the money be used?

According to incomplete statistics, it can be roughly divided into several categories:

Used to provide equipment, logistics, intelligence, and training support to the Ukrainian Army

Due to the large amount of weapons shipped to Ukraine, the money will be used to replenish the U.S. military stockpile

For the U.S. Economic Support Fund to provide additional economic and technical assistance to Ukraine

will be used for humanitarian and global food security needs

It is directly used in the procurement of equipment of various military services in the United States, and is upgraded

There are many projects, and it seems that it is indeed a big deal.

But when you think about it carefully, it's a big deal here.

The 9 billion US dollars is said to be economic and technical assistance to Ukraine, but in fact this money is not directly sent to Ukraine, but allocated to some foundations in the United States, and then the foundation will support Ukraine "as the case may be".

In terms of humanitarian and global food security needs, the United States did not say that the more than 6 billion US dollars were given to Ukraine, but to the "global", whether it was used in Africa or "affected by the Russian-Ukrainian crisis" All European countries that created "creation" can be humanitarian aid.

Of course, the United States also has a set of rhetoric. It announced that it is willing to accept 100,000 Ukrainian refugees.

But whether the refugees have such a great "blessing" that they can cross the ocean and arrive safely is not something they can manage.

As for how much Ukraine can get a share of the pie, Russian State Duma Chairman Volodin has calculated an account for Ukrainian President Zelensky.

In his view, of the $40 billion allocation:

4.8% was used to assist refugees, restore the operation of the US embassy in Ukraine, and provide diplomatic support

For 40 billion US dollars, this money is really not much, and if you think about it further, how much will it really be used by the Ukrainian people?

You must know that 40 billion US dollars is not a free gift, it is a debt that needs to be repaid by the Ukrainians themselves!

As a result, Volodin said that the United States and its allies did not intend to give practical assistance to Ukraine at all.

He pointed out, "The United States is already saying that Ukraine will not be able to repay its national debt in the future. On this ground, Ukraine's last resources will be plundered, just like food today."

U.S. Republican Congressman Marjorie Taylor Green also believes that a large part of the U.S. aid to Ukraine will eventually be embezzled by "non-profit organizations and non-governmental organizations" closely related to politicians, which is very much like a disguise. money laundering".

About half of the U.S. aid bill, nearly $20 billion, is aimed at providing weapons and equipment to Ukraine.

Since the Russia-Ukraine conflict, the United States has urgently provided Ukraine with billions of dollars in weapons and equipment, including howitzers, "Stinger" air defense systems, and "Javelin" anti-tank missile systems.

According to the United States, the arsenal is about to be "emptied", and it needs 8.7 billion US dollars to replenish the inventory.

In fact, whether to replenish stocks or strengthen the arms of Europe, it is inseparable from the "intermediary" - the US arms giant.

A lot of related equipment has to be bought from American arms companies.

After a long time, the U.S. said that the aid to Ukraine was not only helping the U.S. military eliminate old inventories, but also placing new orders, sending the silver to arms dealers, and making them a lot of money.

I have to say, this little abacus is really loud!

According to the most optimistic estimates, Ukraine will actually receive 10 billion to 15 billion US dollars of weapons, said Korotchenko, director of the Russian World Arms Trade Analysis Center.

He pointed out that there are many ways to do it:

1. The price has been raised.

He predicted that the price of specific types of weapons or equipment for the Ukrainian army will be several times higher.

Funding will first be provided to U.S. military-industrial enterprises, plus insurance and logistics, and real prices will increase further.

Second, it is not new equipment.

Some supplies are for weapons that were previously produced in US and European warehouses and are even about to expire.

For example, the Mi-17 helicopter used in Afghanistan.

3. There are illegal exports.

Korotchenko estimates that about 10 to 15 percent of the $10 billion to $15 billion in arms and equipment will be illegally re-exported by Ukraine to Africa, the Middle East or Latin America through established Bulgarian or Romanian channels.

In other words, the United States "generously donated money", sold old weapons to Ukraine at high prices, then bought new weapons to arm itself, and finally asked Ukraine to pay off the debt?

According to this logic, Ukraine is really "losing a lot".

["Have to borrow money from China"]

On the other hand, the U.S. aid bill to Ukraine was opposed by the U.S. internal political circles and society from the very beginning.

When the bill passed the U.S. Senate, 11 Republican senators voted against it, citing high risks in the areas of government spending, public debt and inflation.

Among them, Senator Rand Paul of Kentucky, who previously blocked a quick vote on the bill, pointed out that Congress should carefully weigh the costs that the treasury will bear if the bill is passed.

Image source: Screenshot of Fox News in the United States.

"We cannot save Ukraine by sacrificing the American economy," Paul said, "at the expense of American bankruptcy."

He proposed an amendment to create an inspector general to increase oversight over the spending of those funds.

However, Senate Majority Leader Chuck Schumer, a Democrat, has rejected the proposal.

Paul even touched on China.

He pointed out to US media that the endless involvement of the United States in the war will increase its own economic pressure.

In fact, there is not enough money in the US finances to assist Kyiv, "we have to borrow money from China to Ukraine".

The federal senators who voted against the Ukrainian aid bill this time are all from the Republican Party.

They criticized the bill as being too expensive and not enough to offset the related spending.

They pointed to the Biden administration's "excessive focus on Ukraine regardless of the U.S. economy," leaving the U.S. economy experiencing record inflation and supply chain disruptions.

The head of the organization said that the White House failed to clarify its strategy for Ukraine and how it is responsible for the interests of the United States, and the US Congress hastily passed a large amount of financial assistance to Ukraine.

In addition, U.S. media polls show that 51% of U.S. respondents believe that sanctioning other countries should also limit damage to the U.S. economy, while 45% of adults surveyed support sanctioning Russia as effectively as possible.

The analysis pointed out that the surge in the cost of gasoline, groceries and other goods has made the American public increasingly anxious about dealing with inflation and other challenges.

People's purchasing power is declining, and the willingness to financially support foreign countries will shift.

Voters, who had no confidence in the Biden administration's handling of economic affairs, were increasingly dissatisfied with Biden's continued use of taxpayer money to support Ukraine.

The most direct reflection indicator is Biden’s own approval rate.

The latest poll by Reuters and Ipsos shows that Biden's public approval rating has fallen to 36 percent this week, down 6 percentage points from last week.

It was also the lowest level since he was president.

Even though criticized by all parties, U.S. Senate Majority Leader Schumer, a Democrat, said he did not think this would be the "last aid" the U.S. would provide to Ukraine.

In fact, according to Pentagon spokesman Kirby, the United States, Canada, the United Kingdom and other allies have provided Ukraine with "lethal weapons" long before Russia launched the special operation.

In addition, Biden signed the Ukrainian Democratic Defense Lend-Lease Act in early May, which greatly simplifies the procedures for the United States to provide resources such as military aid to Ukraine.

The analysis said that from the actions of the United States, it can be seen that it has regarded Ukraine as a "proxy" at the "national strategic level", and is ready to use Ukraine to drain or greatly weaken Russia's overall strength.

On the surface it is all moral, privately it is all business.

Medvedev, vice chairman of the Russian National Security Council, pointed out that this kind of assistance from the United States "is not to love Ukraine, or even to support its own economy," but to "continue to launch a proxy war against our country."

For the drawbacks of doing so, Medvedev see clearly.

He noted that gasoline and food prices in the U.S. have been "crazy", while the huge national debt continues to rise, "their money-printing opportunities are being wiped out faster."