The assassination of Sherine Abu Akleh.. Al-Jazeera network forms a global legal alliance and refers the file to the International Criminal

On Thursday, Al Jazeera decided to refer the file of the assassination of colleague Sherine Abu Aqleh to the International Criminal Court, and formed a legal alliance to follow up the crime in international judicial bodies. 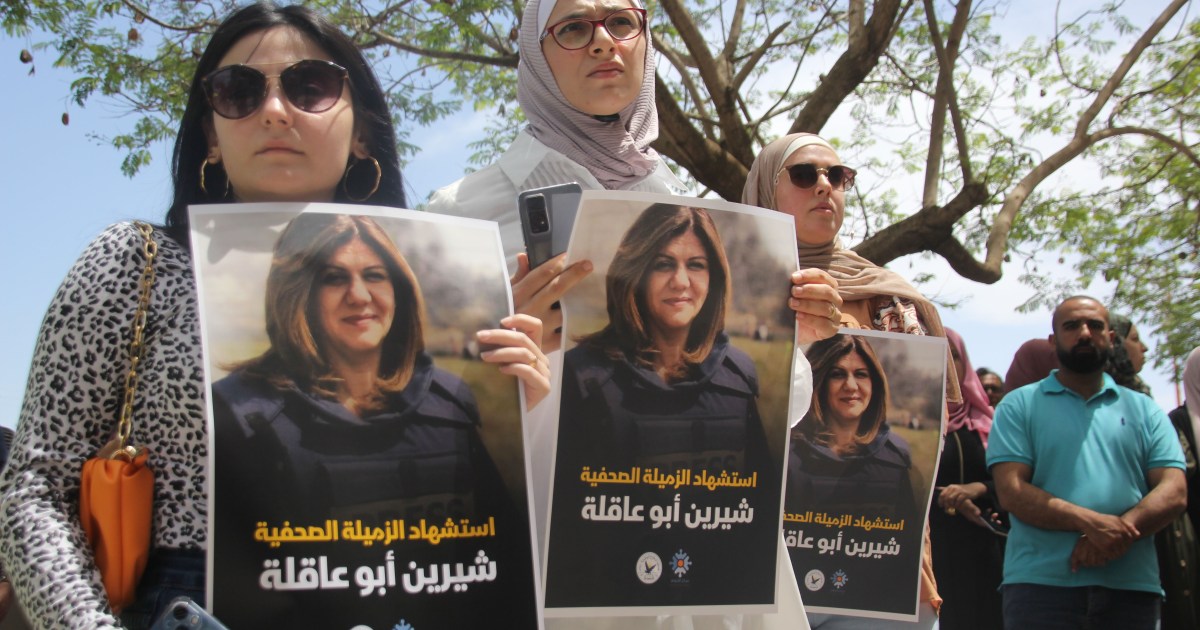 On Thursday, Al Jazeera decided to refer the file of the assassination of colleague Sherine Abu Aqleh to the International Criminal Court, and formed a legal alliance to follow up the crime in international judicial bodies.

Al-Jazeera network said in a statement that it pledges to activate all possible paths to bring those responsible for the assassination to the platforms of international justice and take their legal punishment.

On May 11, the Israeli occupation assassinated colleague Shireen Abu Aqleh while she was covering the storming of Jenin in the occupied West Bank, which caused outrage in human rights and media circles at the Arab and international levels.

Sherine Abu Aqleh has covered the conflict in the occupied Palestinian territories for 25 years.

Al-Jazeera network said that the crime file will include the Israeli bombing and destruction of the Al-Jazeera office in Gaza in May 2021.

"We have formed an international legal alliance that includes our legal team and international experts to prepare a complete file to be submitted to the International Criminal Court Prosecutor," the statement said.

bullet in the brain

Al-Jazeera's statement coincided with the Palestinian Public Prosecution's disclosure of the results of its investigation into the assassination of colleague Sherine Abu Aqleh, at a time when this crime was raised before the UN Security Council.

The Palestinian Public Prosecutor, Akram Al-Khatib, confirmed that an Israeli occupation soldier shot Al-Jazeera reporter Shireen Abu Aqleh and hit her in the head while she was trying to escape.

Al-Khatib revealed - during a press conference yesterday, Thursday - the details of the investigation into the assassination of the Al-Jazeera correspondent, which was handed over to President Mahmoud Abbas.

The Public Prosecutor clarified that the bullet that killed Shireen Abu Aqleh was 5.56 millimeters in diameter, and was used by NATO forces.

He also said that the cause of death was a laceration to the brain of the martyr Shireen Abu Aqleh, indicating that she was in an escape position.

The Palestinian Attorney General confirmed that the occupation forces fired directly at the location of the journalists' presence in Jenin, including Shirin, without any prior warning.

He pointed out that the Israeli army was seeing the journalists clearly and openly, and that they clearly showed themselves to the occupation forces in Jenin.

Al-Khatib stressed that a force of the occupation army had a clear and direct view of the location of the journalists' presence in Jenin, stressing that all journalists were wearing the uniform of the press, which is recognized internationally.

The Palestinian Public Prosecutor said, "We have facts and data that enable us to confront any Israeli narrative.

He explained that the American side "was briefed on aspects of our investigations, but did not interfere in our procedures," stressing that the investigation was purely Palestinian, without any external participation.

At a UN Security Council session, US Ambassador Linda Thomas Greenfield said, "We express our concern about what happened during the funeral of Shireen Abu Akleh."

The Russian delegate added that Israel continues to violate the law and confiscate Palestinian lands and settlement operations.

As for the UN Special Rapporteur on the Protection of Freedom of Opinion, she told Al Jazeera that the International Criminal Prosecutor should start an investigation into the assassination.

She added that the killing of Shireen Abu Aqleh amounted to a war crime.

She stated that before Shireen Abu Aqleh, "about 40 Palestinian journalists were killed, but there was no accountability."