Pakistan..a new chapter in the political crisis and these are the scenarios for the next stage

The Pakistani political crisis has resumed, especially with the leader of the PTI and former Prime Minister Imran Khan mobilizing his supporters to demonstrate in a number of Pakistani cities against the new government led by Shahbaz Sharif. 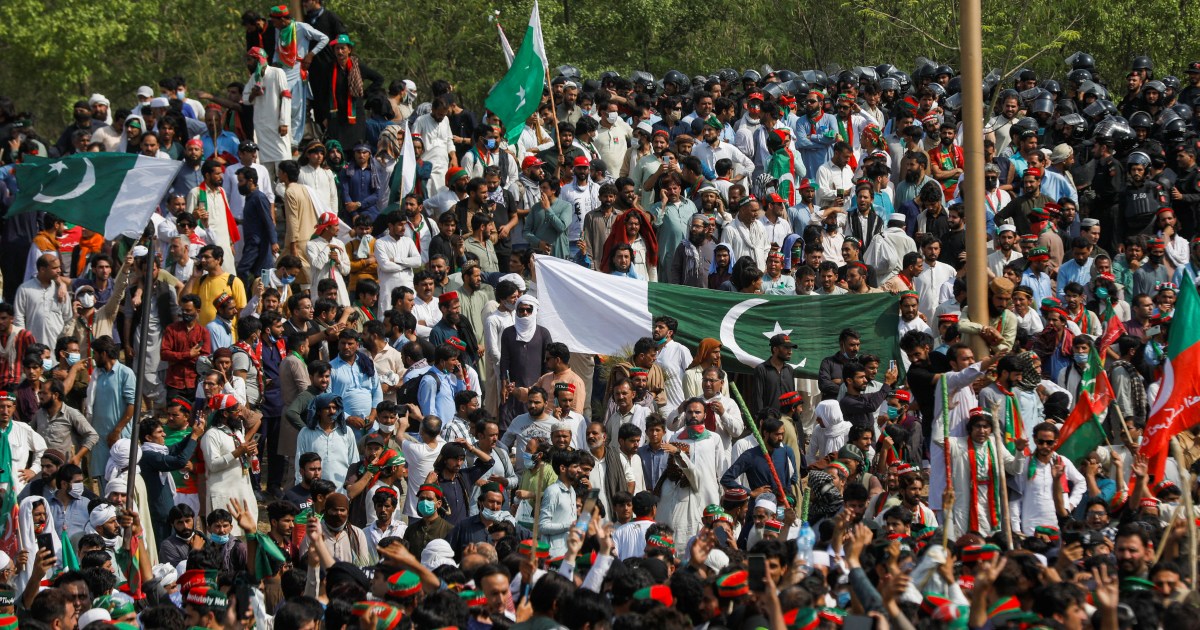 The Pakistani political crisis has resumed, especially with the leader of the PTI and former Prime Minister Imran Khan mobilizing his supporters to demonstrate in a number of Pakistani cities against the new government led by Shahbaz Sharif, and to demand new elections and the dissolution of the Senate, Parliament and the government.

With Khan announced the cancellation of the protest marches, he warned the authorities that they would return to the streets unless the government called for elections within 6 days.

This announcement by the opposition raised speculation that secret negotiations could be held between the two parties, to find a quick solution to the crisis.

The Express Tribune of Pakistan reported on Friday that Imran Khan had agreed to hold talks with the coalition government.

She said that the talks will focus on electoral reforms and other issues, and that they will be behind the scenes in the first stage, and if it does not yield a positive result, there will be no official dialogue later.

This offer is supported by;

What Prime Minister Shahbaz Sharif hinted to him yesterday, Thursday, during a session of Parliament, is that the doors for dialogue are open, and a committee can be formed to discuss the issue of the elections, which he said will be set by the Parliament.

For his part, the Secretary-General of the Insaf Party, Asad Omar, welcomed Shahbaz Sharif's offer, and said that Shahbaz Sharif should announce the formation of a committee to hold new elections with the proposed date for the elections.

He said their talks would focus only on the one-point agenda for when the country's general elections would be held.

The next stage is seen as highly complex, and on the expected scenarios, it largely depends on the outcome of the negotiations.

Political analyst and researcher at the Institute of Strategic Studies in Islamabad, Muhammad Faisal, says that the current days are witnessing a temporary calm, but within days Imran Khan will repeat his demands publicly, with one day remaining until the deadline he previously set.

In this case, Faisal says - in an interview with Al-Jazeera Net - that the government has few options, the first is to continue to refuse to accept Imran Khan's demands, which worsens the political crisis.

As for the second option, it is to open a dialogue with the Insaf Party, to find a compromise solution that will reduce the intensity of the conflict in relative terms.

The third option is for the government to announce the dissolution of the council and to give calls for elections under the pretext of the economic situation, as talks with the International Monetary Fund failed to reach an agreement, he said.

For his part, political analyst Tahir Khan believes that the government will not immediately accept Imran Khan's demands, but it cannot avoid his demands for a long time because Khan will not give up on his demands.

Tahir Khan added in an interview with Al Jazeera Net, I think the government is reluctant to go to elections soon because Imran Khan has gained some popular support after his overthrow.

While analysts downplay the possibility of the country descending into violence, Mohammed Faisal says he does not believe there will be more clashes between PTI members and the police, as the Supreme Court intervened.

Now that the bulk of the long march is over, Faisal adds, it is doubtful that Khan will be able to get the people out again on such short notice.

This is confirmed by Tahir Khan, who says it would be premature to say there will be violence, but there is no doubt that the current political tension is very difficult.

With regard to the position of the Pakistani army, which is strongly present in political life, it has so far shown a neutral position on the crisis, is watching with interest the development of the situation, is more concerned with the economic situation, and wants a degree of stability and the return of manifestations of order.

For this, the army will support any government decision to address the impasse, according to Muhammad Faisal.

As for Tahir Khan, according to him, although the army insists that it is neutral, it may play a role if the PTI and the ruling coalition move into a situation resembling a clash, and drag the country into a state of violence.