In the serenity of his Senegalese studio inhabited by birdsong, the painter Omar Ba begins a canvas on the floor, applying a deep black background. 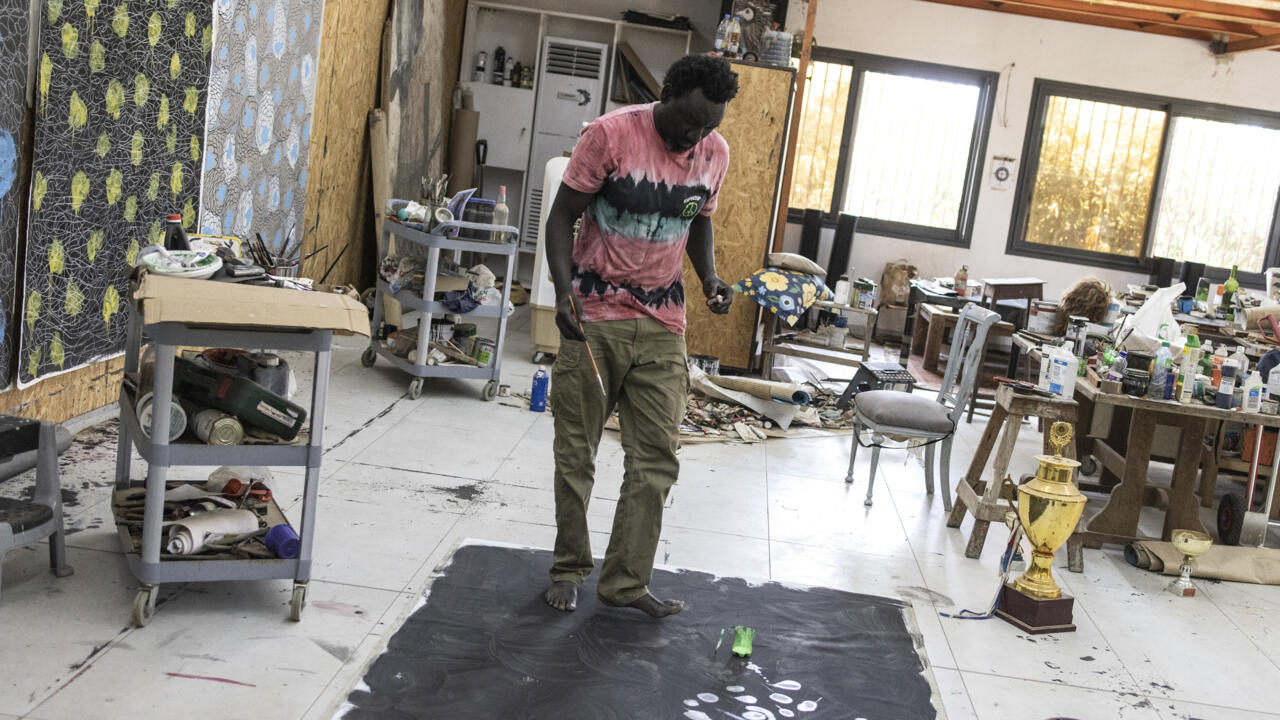 A bias in the genesis of his committed work, which questions the state of the world and the place of Africa.

This black background, "it's like the night: the perspective can be lost... but for me, every object and everything finds its place", he says in the intimacy of his studio, after a sandy track strewn with shells from nearby Lac Rose.

Turning for long minutes around a canvas of more than five meters, his long and imposing barefoot silhouette stops.

He squats down and launches into the sketch of a group of young people.

He is in "perfect union" with this black.

It says "to be" the color black, "noble and magnificent".

"I feel like any other color I put on it is going to give me exactly what I want," he explains.

At 45, Omar Ba is one of the rising stars of contemporary African art and one of the artists most prized by collectors.

He is one of the sensations of the 14th Dakar Biennale, which opened on Thursday.

The painter expresses his joy at exhibiting there for the first time, and in his country where he was born into a family of seven brothers and sisters.

It was in Dakar that after having given up training as a mechanic, he began his art studies, which continued in Geneva from 2003.

The artist experienced the galley, exhibiting in hair salons and cafes, before his talent was revealed in 2009 by curator Federica Martini.

Since his first exhibition in Switzerland in 2010, the artist who lives between Senegal, Brussels and Geneva has been exhibited at the Center Pompidou in Paris and in many of the greatest galleries and museums around the world.

He has built a workshop in a haven of peace where he recharges his batteries in the middle of a mango tree plantation, an hour's drive from Dakar.

The land is occupied by cows, ducks, exuberant flowers and birds that fly above his canvases.

In the studio, a bric-a-brac of material accumulates, such as these "Typex" correction pens with which he singularly goes over his drawing, and objects found for documentation, such as these magazines from the Second World War.

Contemporary artist Omar Ba in his studio in Sangalkam, May 9, 2022 in Senegal JOHN WESSELS AFP

They helped him understand the propaganda when this grandson of a Senegalese skirmisher wanted to denounce the ravages of war.

"These half-man half-animal characters are a nod to the nature of the human being who, I think, behaves like an animal in the jungle," he notes.

In an exhibition in 2021 in Brussels, he represented several imaginary heads of state seated in front of a table, their hands resting on a book symbolizing this constitution that many real leaders have manipulated to remain in power indefinitely.

"We see that Africa wants to go elsewhere, wants to move... There are wars, overthrown heads of state, dictatorships; that concerns me," he says.

"Omar Ba? But he is reinventing painting!", exclaims the artistic director of the Biennale, Malick Ndiaye, "it is a powerful and innovative work" and an incessant research process.

Contemporary artist Omar Ba in his studio in Sangalkam, May 9, 2022 in Senegal JOHN WESSELS AFP

Omar Ba is represented by Templon, a renowned French gallery.

He is currently exhibiting around twenty paintings at the Royal Museums of Fine Arts of Belgium, another exhibition is planned for September in New York and, in November, a retrospective at the Baltimore Museum.

"His work is much more complex than most things you can see: the treatment of the subject, his use of bestiary and colors are of a striking strength and beauty", considers his gallery owner Mathieu Templon.

"He is one of the African artists who today has the most aesthetic and political work".

An "African artist should not remain indifferent to what is happening in this continent", believes Omar Ba.

"We must try to see what we can bring to build, pacify and give hope, finally", he says with a soft smile.