Well-known overseas Chinese businessman Xue Shuihe: Live up to the opportunity of the times and tell the world a good "Sichuan story"

(Sichuan United Front People Said United Front Matters) Well-known overseas Chinese businessman Xue Shuihe: Live up to the opportunity of the times to tell the "Sichuan Story" to the world   China News Service, Chengdu, May 26 (Yue Yitong Su Qiuwen) "As a senior overseas Chinese businessman who has lived in Sichuan for 27 years, I have a deep affection for the land of Bashu, and I would like to t 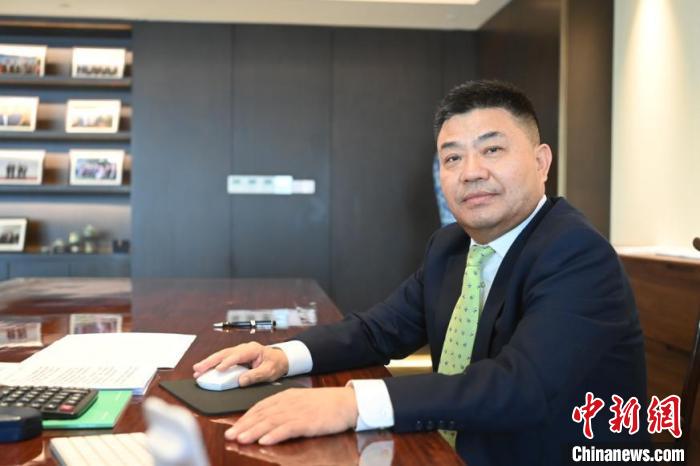 (Sichuan United Front People Said United Front Matters) Well-known overseas Chinese businessman Xue Shuihe: Live up to the opportunity of the times to tell the "Sichuan Story" to the world

China News Service, Chengdu, May 26 (Yue Yitong Su Qiuwen) "As a senior overseas Chinese businessman who has lived in Sichuan for 27 years, I have a deep affection for the land of Bashu, and I would like to tell the world about the rapid changes here, and I hope there will be more Many overseas Chinese businessmen understand this vast land and come to Sichuan to look for new opportunities for development." Recently, the executive vice president of the China Overseas Chinese Business Association, the executive vice president of the Sichuan Overseas Chinese Business Investment Enterprise Association, and the director of Chengdu Huirong Industrial Group Co., Ltd. Chang Xue Shuihe said in an interview with Chinanews.com.

Wearing a decent suit and a tie full of panda patterns, 61-year-old Xue Shuihe's love for Sichuan is beyond words.

Standing in front of the floor-to-ceiling windows of the office and looking into the distance, this energetic looking overseas Chinese businessman has a kind smile on his face.

"In the past 30 years, I have witnessed the development of Sichuan with my own eyes. The tall buildings rising from the ground and the wide and flat avenues are the most vivid evidence."

In the 1980s, with the spring breeze of reform and opening up blowing all over China, Xue Shuihe embarked on the road of establishing an industry.

With the courage to be the first and the determination to persevere, the foundation of his career development has become increasingly solid.

In 1995, because he was optimistic about Sichuan's development prospects and the scale of the consumer market, he took his Longwang Foods into Chengdu and formed an indissoluble bond with the land of Bashu.

Looking back on his journey along the way, Xue Shuihe said with emotion, from the reform and opening up to the development of the western region, to the construction of the Chengdu-Chongqing economic circle and the development of the western region in the new era, he is the beneficiary of the opportunity dividend of the times, only Continue to stay true to the original intention, forge ahead, and contribute more to Sichuan and the country's economic and social development, in order to live up to the years.

In Xue Shuihe's view, every step of the group's career development is engraved with the brand of the times. While the company continues to grow, it should actively fulfill its social responsibilities and give full play to the power of private enterprises.

For more than ten consecutive years, he has made donations to the "Overseas Chinese Hearts Bright Thousand Miles of Love" charity event, and has contributed to various fields such as earthquake relief, student aid, disabled aid, and poverty alleviation. Up to now, Huirong Group has donated tens of millions of yuan.

"Wealth comes from the society and should also be given back to the society." Xue Shuihe said firmly.

As a member of the Sichuan Provincial Committee of the Chinese People's Political Consultative Conference, Xue Shuihe actively participates in the deliberation and deliberation of politics. Every year in the two sessions of the province, he provides advice and suggestions based on his professional fields and current affairs hotspots, and responds to the concerns of people's livelihood; The executive vice president of the Enterprise Association, he enthusiastically organizes, promotes and participates in various overseas Chinese exchange activities.

Over the years, telling the "Sichuan Story" well to the world has been a constant in Xue Shuihe's heart.

"Sichuan, which is located in the west, is rich in resources and has strong development potential. In the new era where new opportunities are constantly being superimposed, the degree of opening to the outside world has been continuously expanded, and the business environment has been increasingly optimized." Speaking of Sichuan's advantages, Xue Shuihe talked endlessly, He smiled and said, "I sincerely hope that the majority of overseas Chinese businessmen will pay attention to Sichuan, come to seek opportunities, and contribute to the construction of the western region while realizing their own development."

Xue Shuihe, who has been developing in Australia for many years, is also committed to promoting Sino-Australian economic, trade and cultural exchanges.

As the permanent honorary chairman of the Australia-China Economic, Trade and Cultural Exchange Promotion Association, and the honorary chairman of the Australia-China Peaceful Reunification Promotion Association, Xue Shuihe deeply feels the responsibility and is willing to build a bridge between the two countries with his own efforts.

During the Chinese New Year, Zigong lanterns will light up the local area, which not only makes the overseas Chinese feel homesick, but also amazes the local people.

"In fact, overseas people have always been full of curiosity and yearning for the magnificent traditional Chinese culture. I hope to use the Lantern Festival to deepen overseas understanding of China and enhance the friendship between the two peoples."

In Xue Shuihe's office, Sichuan elements can be seen everywhere.

"Everyone says that Chengdu is a city that you can't leave once you come, and I can't leave either, because I don't want to leave at all." Xue Shuihe said with a smile, as an "old Chengdu", he is firmly rooted in the Sichuan, where the tolerant and friendly atmosphere and the promising opportunities made him unable to give up.

"The pace of development of the times will not stop. I am willing to move forward together with Sichuan, not forgetting the original intention, so that we can always be forever." (End)