The organizers of the joint tribute that the unions of the National Police and the Civil Guard were going to pay to the agents who allowed the defeat of ETA were... 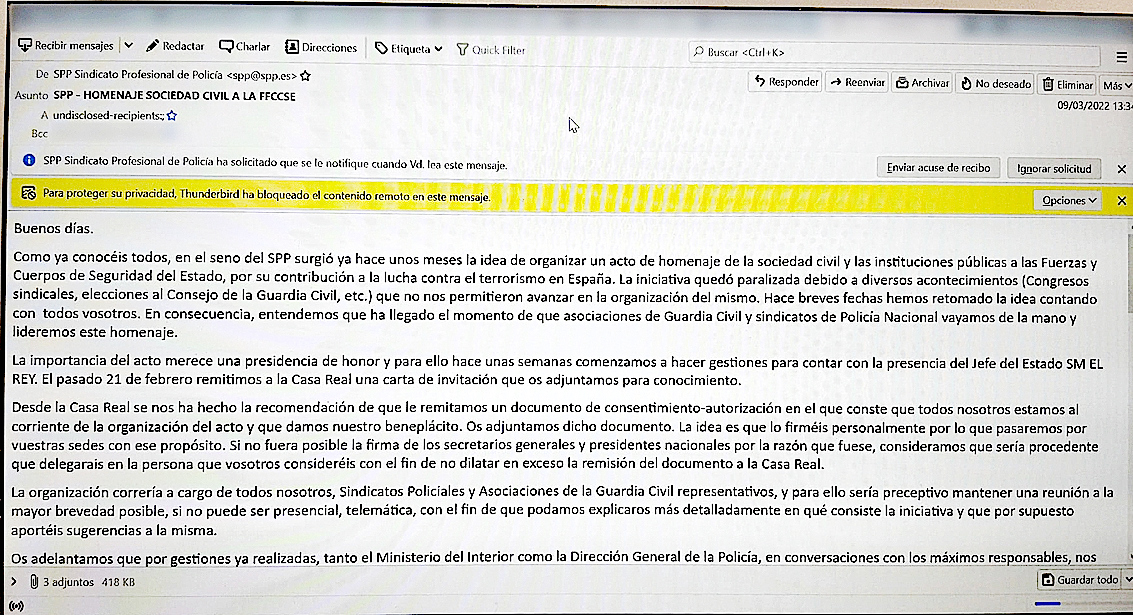 So at least they exposed it in the emails they sent to shape an event that could not be held because, as revealed by

(SPP) -organizer of the event-, "the mandatory report of the Ministry of the Interior, as communicated to us by the

That circumstance forced the cancellation, which is now trying to resume the Community of Madrid.

From the Presidency they are going to contact the organizers to take over from the Interior and organize the tribute gala to the agents of the National Police Corps and the Civil Guard who defeated the terrorist group ETA.

The contacts, they insisted, will begin "shortly."

"It will be done in the same terms and with the same people with whom it was planned so as not to distort the initial idea," the same sources pointed out about an act that has attracted the media focus in recent days, due to the events that led to its cancellation.

The organizers were the first surprised.

In one of those emails, to which EL MUNDO has had access, the

informs the rest of the participants that "the heads of the Ministry of the Interior" had shown their willingness to attend.

It was in February, the month when they asked the rest of the unions and groups for their signature to send them to Casa Real, which had required them to be able to participate.

“We anticipate that due to steps already taken, both the Ministry of the Interior and the

General Directorate of the Police

, in conversations with those responsible, have shown us their willingness to collaborate in said act, ”the email collected.

In fact, among the potential guests is the Minister of the Interior.

When the organizers began to shape the gala -before the summer of 2021- they were clear that an act deserved the Presidency of the Royal House: King Felipe VI and any other member of his family.

The SPP also understood that such an act needed the consensus of the Police union group and the Civil Guard association.

For this reason, in the month of November he initiated contacts and in December everyone was already informed and had communicated their intention to participate.

The emails exchanged by the organizers reveal that the tribute to the agents was well advanced.

To ensure the Monarch's presence, the organizers contacted

at the beginning of January.

They sent a letter of invitation in which they explained the reason for the homage and expressed their desire that King Felipe VI, or another member of his House, preside over it.

On February 21, as certified by the email to which this newspaper has had access, the SPP addressed the rest of the participants to request a document with their names, surnames and signatures because Zarzuela had asked for them.

The fact that the Royal House asked for this dossier made the organization take the tribute for granted, after seven months of preparation.

This is how they expressed it in the mail to their colleagues, highlighting the conversations "with the highest officials" of the Fernando Grande-Marlaska department.

However, a new communication from the Royal House, at the beginning of April, disrupted the planning that the SPP believed guaranteed.

In the letter, they point out from the organization, they replied that the King had the complete agenda.

The surprise was so considerable that the SPP decided to contact the Royal House directly.

"They told us that the mandatory Interior report was missing," Medina ditches.

Without this government endorsement, neither the King nor any member of his family can attend an act.

The organizers then concluded that, without his presence, the tribute was meaningless and they called off.

We will take the steps so that it does not happen again, ”argues the leader of the SPP.

The backstage of the frustrated event were worked.

Police and civil guards had reached an understanding and, before Christmas, they contacted the WiZink Center to see its availability and close possible dates.

The company that manages the pavilion made itself available for the tribute, considering that it was a solidarity act.

In January, the venue was pre-booked and it was announced that the event would be held in March.

By then, the SPP knew the predisposition of the Royal House and was collecting the signatures of the participants.

Finally, it was scheduled for April 25.

The organizers had received the offer from Interior "to collaborate", they were already in contact with Casa Real to finish off the details and even had a presenter.

The Ministry of the Interior maintains that it was unaware of the existence of this tribute and that it never had an "official communication" of the intentions of the organizers of the event that was to be held at the WiZink Center last April.

In the week in which the SPP planned to hold the gala, the Government needed

's support to carry out the decree on economic measures derived from the war in Ukraine.

After a few hours of tough negotiations,

managed to push through the vote on the decree thanks to the vote in favor of the five EH Bildu deputies.

From the PP, Alberto Núñez Feijóo yesterday led the reproaches to the Government, pointing to the minister: «He does not like that what has happened in Spain at the worst moment» of democracy be given testimony and recognized.

insisted that "the victims deserve much more respect than what this government has proposed," and stated: "If it is confirmed, it does not have a pass.

He doesn't have a pass that we can't comfort the victims.

There cannot be a minister responsible for that veto, and if it is confirmed, the minister continues in an escape from his own history as a judge of the