The effect of health poverty alleviation: the comprehensive realization of basic medical care for the rural poor

Fully realize basic medical care for the rural poor core reading   Since the 18th National Congress of the Communist Party of China, my country's health poverty alleviation work has achieved positive results: the basic medical care for the rural poor has been fully guaranteed, and a total of nearly 10 million families who have returned to poverty due to illness have been successfully lifted ou 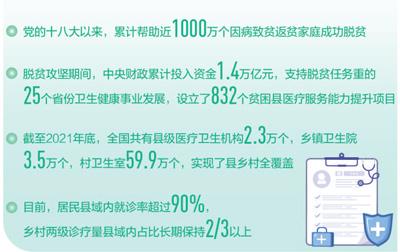 Since the 18th National Congress of the Communist Party of China, my country's health poverty alleviation work has achieved positive results: the basic medical care for the rural poor has been fully guaranteed, and a total of nearly 10 million families who have returned to poverty due to illness have been successfully lifted out of poverty; System, carry out dynamic monitoring of people who are prone to return to poverty and become impoverished; carry out a number of counterpart assistance measures, continue to increase the support of policies, funds and projects, and comprehensively improve the medical and health service capacity of poverty-stricken areas.

On the 24th, the National Health and Medical Commission held a press conference to introduce the effectiveness of the health poverty alleviation work since the 18th National Congress of the Communist Party of China and the progress of the effective connection with rural revitalization, and answered questions from reporters.

He Jinguo, Director of the Rural Revitalization Office and Director of the Finance Department of the National Health and Medical Commission, introduced that since the 18th National Congress of the Communist Party of Families who have returned to poverty due to illness have successfully escaped poverty and achieved remarkable results.

Clarified the target standard for guaranteed basic medical care, historically solved the problem of lack of institutions and doctors at the grassroots level in some areas, and made it possible for the rural people to see a doctor at a local place and a doctor to see a doctor, and common diseases and chronic diseases can basically be treated in a timely manner.

Second, the service capacity of county-level hospitals in poverty alleviation areas has been improved by leaps and bounds, and the gap between urban and rural medical service capacity has been continuously narrowed.

The third is to implement precise policies for households and people due to illnesses, and the assistance measures are implemented to people and diseases precisely.

Fourth, the prevention and control of key diseases in key areas has achieved historic results.

Adhering to the principle of prevention, and implementing major infectious diseases and endemic diseases prevention and control actions, major diseases such as AIDS, hydatid disease, and endemic diseases that have long affected people's health have been effectively controlled, laying the foundation for comprehensively promoting the construction of a healthy China.

Preventing large-scale return to poverty is the bottom line task of consolidating the achievements of poverty alleviation.

Zhang Xuying, deputy director of the China Population and Development Research Center, said that through the dynamic management system of health poverty alleviation, it was found that 10 million poor families in rural poor families returned to poverty due to illness or became impoverished due to illness, accounting for 40% of the entire poor households.

How to prevent people who have been lifted out of poverty from returning to poverty again due to illness?

He Jinguo said that on the basis of the original national health and poverty alleviation dynamic management information system, it has been connected with the national dynamic monitoring network for poverty prevention and compared with the data of relevant departments. To carry out dynamic monitoring of the people who are prone to return to poverty, such as households, marginal households prone to poverty, and households with sudden serious difficulties.

"The monitoring and assistance mechanism is working." He Jinguo said that Aunt Ma from Fuping County, Hebei Province was diagnosed with uremia in June last year and required continuous dialysis treatment.

After discovering the difficulties of Aunt Ma through the survey, she was promptly included in the household with sudden and severe difficulties, and the assistance policy was immediately implemented. The village doctor often came to provide services. At present, Aunt Ma is in stable condition.

Henan Province requires that the key monitoring objects newly included in the system must go to the household to verify basic information within one week, and implement health assistance measures within one month.

At the same time, it updates data synchronously with the Rural Revitalization Bureau every week, reports the implementation of health assistance measures quarterly, and urges local city and county governments to implement assistance measures; Gansu Province has established a dynamic monitoring platform for guaranteed basic medical care to establish dynamic Monitoring information feedback and abnormal data supervision system, feedback monitoring information on the implementation of basic medical care and health assistance policies to cities and counties every month, and feedback relevant information to cities and counties.

In response to the weak medical service capacity in impoverished areas, my country has carried out a number of counterpart assistance measures.

"If we used to focus on 'blood transfusion', we should focus on 'blood production' in the rural revitalization stage." Jiang Hui, Secretary of the Party Committee of Peking University First Hospital, said that he will strive to help the aided hospitals build a number of clinical clinics. Specialties, bring out a group of clinical backbones, fill a group of technical gaps, improve a group of management systems, and effectively improve their service capabilities and levels.

Strengthening the supply capacity of medical and health services in poverty-stricken areas is one of the key tasks of health poverty alleviation.

Since the eradication of poverty, my country has continued to increase support for policies, funds and projects, make up for shortcomings, strengths and weaknesses, comprehensively improve the facilities of medical and health institutions in poverty-stricken areas, and comprehensively enhance service capabilities.

It is understood that during the period of poverty alleviation, the central government invested a total of 1.4 trillion yuan to support the development of health services in 25 provinces with heavy poverty alleviation tasks, with an average annual growth rate of 11.6%. 832 poverty-stricken counties were specially established. .

In addition, the supply of policies has been continuously increased in the training, recruitment, use, and incentive guarantee of health professionals.

The focus of medical and health work has been shifted downward and resources have been lowered, and positive progress and results have been achieved in rural health services.

By the end of 2021, there will be 23,000 county-level medical and health institutions, 35,000 township health centers, and 599,000 village clinics across the country, achieving full coverage of counties and villages.

The appearance of many primary medical and health institutions has been improved.

In the process of promoting the construction of healthy villages, the contracted service of family doctors is an important part.

Zhu Hongming, deputy director of the grass-roots department and first-level inspector of the National Health and Health Commission, introduced that during the poverty alleviation period, the chronically ill poor people who have been registered and registered have basically achieved the "signatures that should be signed" for family doctor contract services.

By the end of 2021, there are 1.435 million family doctors nationwide, and 431,000 teams have been formed to provide contracted services to residents.