Satellite images - recently taken from a desert in northwest China - revealed an imaginary missile target in the form of an aircraft operated by the Japanese army, and it could be called up for use in the event that China attacked Taiwan. 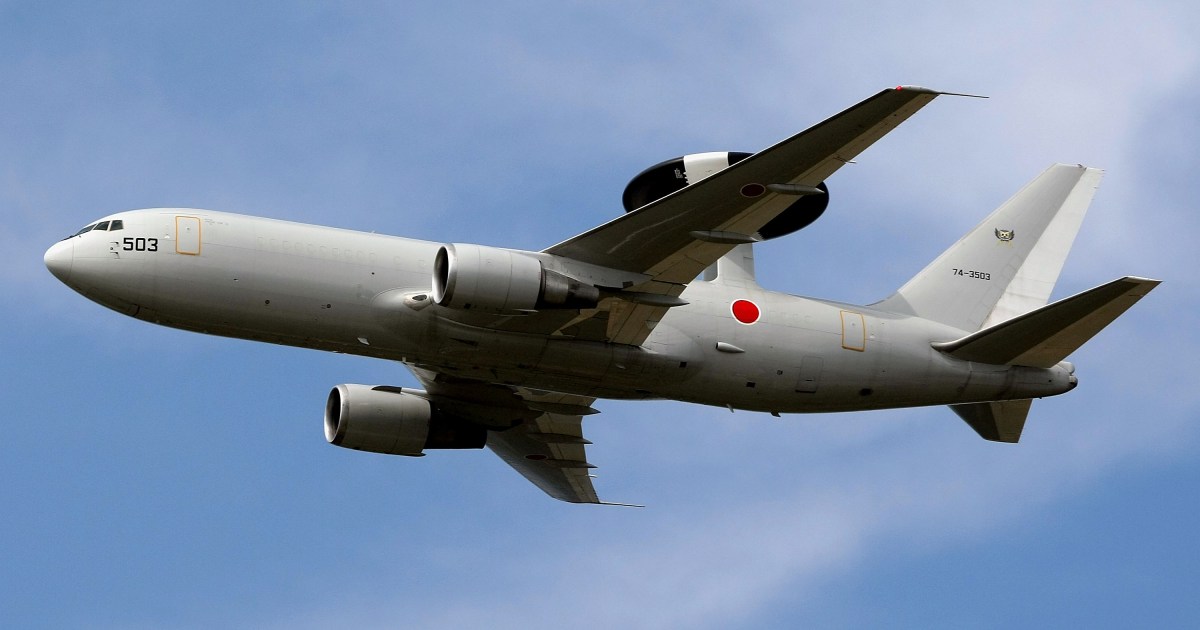 Satellite images - recently taken from a desert in northwest China - revealed an imaginary missile target in the form of an aircraft operated by the Japanese army, and it could be called up for use in the event that China attacked Taiwan.

A report in the American magazine Newsweek described Japan - which hosts the largest number of American forces outside the United States - as one of Washington's pillars to demonstrate its power and influence in the Pacific region, and is also among the countries that will likely engage in any possible operation to defend Taiwan. In the future.

Scientists believe that the aircraft model used by the Chinese army in the Taklamakan desert in Xinjiang province in training targets, was modeled after the Boeing E-767, an AWACS-operated aircraft operated by the Defense Forces. Japan's Air Self, according to a report released on May 20 by the Nikkei Asia Index.

The satellite image, which was taken on May 13 in Ruqiang County, Xinjiang Province, shows an imaginary target with two engines and a large radar in the form of a disk installed in the fuselage of the plane parked on a runway, and it appears that the model is surrounded by a number of smaller combat aircraft.

In the Nikkei Asia report, Thomas Shuggart, a defense analyst and associate researcher at the Center for a New American Security, identified the aircraft's design as a Boeing E-767, four of which are operated by Japan's Air Self-Defense Force outside Hamamatsu Air Base.

According to Newsweek's report - prepared by the magazine's Asian affairs editor - AWACS planes play an important role in monitoring combat operations, and carry out reconnaissance to detect enemy planes and missiles that may be out of the reach of ground-based radar stations.

The Boeing E-767 can continue to cover high altitudes for about 5,600 miles.

According to the Nikkei Asia Index, Matt Korda, a researcher in the Nuclear Information Project at the Federation of American Scientists, was able to determine the location through images taken by the American satellite company, Planet Labs.

Newsweek says Planet Plus provided it with those images for inclusion in its report.

Korda was among two teams of analysts who discovered hundreds of missile depots being built in separate locations in Xinjiang and Gansu Province in the summer of 2021, also with the help of Planet Plus images.

Earlier in May, the US Naval Institute (USNI) discovered a mock target that resembled the frame of a warship and the hull of a dock in the Taklamakan Desert.

Analysts in Taipei identified the shape of the pier structure as resembling a landmark in Suao Port in eastern Taiwan.

In 2021, the US Naval Institute news website (USNI News) reported the discovery of a model of an aircraft carrier and a US destroyer on the rails in the desert, both of which are likely to be used as targets for missile tests.

It is most likely - according to Newsweek - that the Japanese and Taiwanese governments are aware of the scope that China is targeting.

The discovery suggests that Beijing, which is engaged in modernizing its forces - perhaps with the aim of annexing Taiwan - is taking into account the possibility of Washington and Tokyo militarily interfering in the crisis.

The American magazine quoted Su Tzu Yun, a researcher at the Institute of Defense and National Security Research (a military research center backed by the Taiwanese government), as saying that China's efforts to improve the accuracy of its ballistic missiles could increase its lethal power, especially expanding its ability to first strike or launch a surprise attack to support Beijing's goals. political.

Su added that the Taklamakan Desert is a site where the Chinese People's Liberation Army conducts missile tests, such as the White Sands shooting range and the US Army's missile test.

He claimed that US forces have reinforced their missile defenses and aircraft shelters on the Pacific island of Guam and the Japanese province of Okinawa in response to China's moves.

Taiwan, in its own assessment of Beijing's political calculations, rules out an invasion of its territory in the short term, at least during the remainder of Taiwan President Tsai Ing-wen's term.

US officials believe that China intends to develop the necessary competence - including the ability to fend off US or Japanese interference - by 2027, the centenary of the People's Liberation Army.