In the Nikolaev region: the Russian Defense Ministry announced the destruction of the Ukrainian electronic intelligence center

In the Nikolaev region, the Ukrainian center of electronic intelligence was destroyed by high-precision missiles, the Russian Defense Ministry reported. Russian air defense systems shot down 13 drones, a Mi-24 helicopter, and a military transport aircraft of the Armed Forces of Ukraine. In addition, the LPR reported that there were about 8,000 Ukrainian prisoners of war in the Donbass, and in the Zaporizhia region they stated that Ukraine had forever lost access to the Sea of ​​Azov. 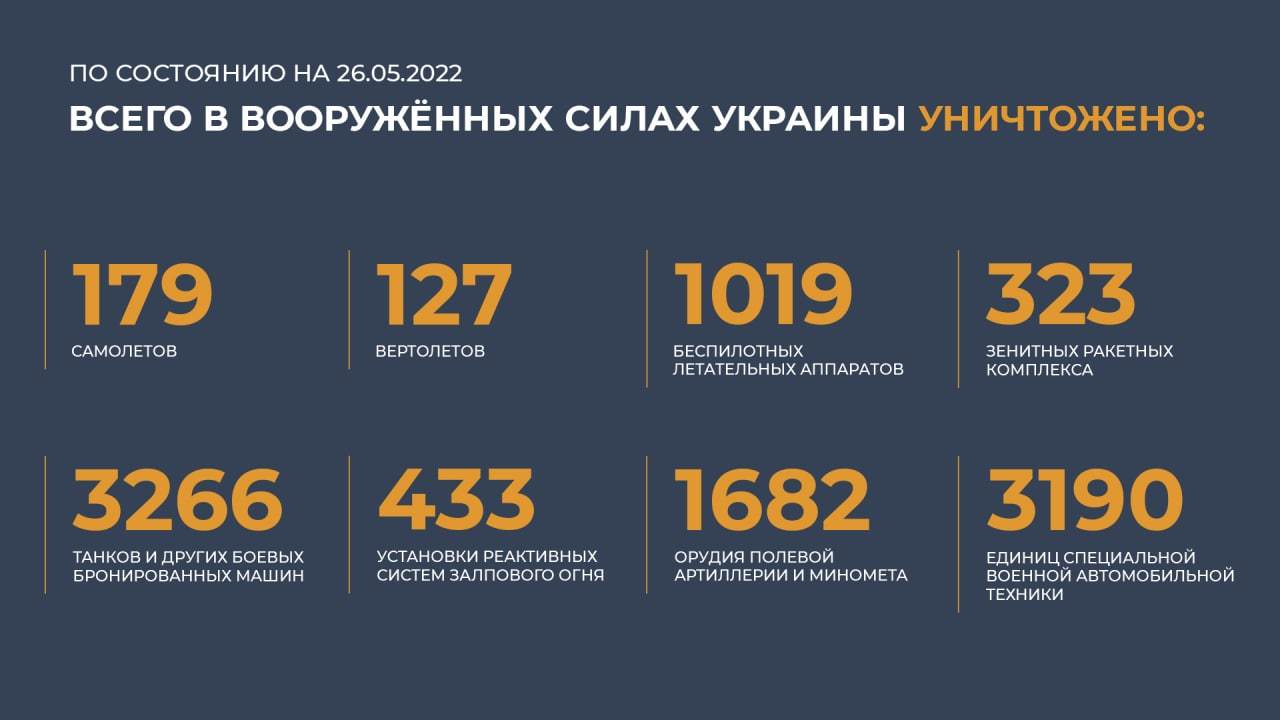 This was stated by the official representative of the Russian Defense Ministry, Major General Igor Konashenkov.

“In the area of ​​​​the settlement of Dneprovskoe, Mykolaiv region, the Ukrainian center of electronic intelligence was destroyed, including 11 military personnel of the combat crew, as well as 15 foreign specialists who arrived with the protection of engineering and operational staff,” he said.

Also, according to him, 48 areas of concentration of manpower and military equipment of the Armed Forces of Ukraine, two artillery batteries, two ammunition depots were hit.

Russian aviation, in turn, destroyed more than 350 nationalists, disabled 96 weapons and military equipment, while air defense systems shot down one Ukrainian Mi-24 helicopter, a military transport aircraft of the Armed Forces of Ukraine that delivered ammunition and weapons, and 13 drones.

“Missile forces and artillery hit 62 command posts, 407 areas of concentration of manpower and military equipment of the Armed Forces of Ukraine, 47 artillery and mortar units in firing positions, as well as three ammunition depots.

In the area of ​​​​the Pokrovsk railway station of the Donetsk People's Republic, as a result of the strike, units and military equipment of the 10th mountain assault brigade of the Armed Forces of Ukraine, which arrived to reinforce the Ukrainian group in the Donbass, were destroyed during the unloading, ”concluded the official representative of the Russian Defense Ministry.

There are about 8,000 captured soldiers of the Armed Forces of Ukraine in Donbass

There are approximately 8,000 captured Ukrainian soldiers in the Lugansk and Donetsk People's Republics, LPR Ambassador to Russia Rodion Miroshnik said on the Soloviev LIVE TV channel.

“There are many prisoners.

Of course, there are more of them on the territory of the Donetsk People's Republic, but we also have enough, and now the total figure is somewhere around 8,000. This is a lot, and literally hundreds are added every day,” he said.

In his opinion, the number of prisoners will increase, since now the Kyiv regime, instead of trained units of the Armed Forces of Ukraine and the National Battalions, “throws to the front line” territorial defense units.

"The Sea of ​​Azov is forever lost to Ukraine"

Ukraine forever lost access to the Sea of ​​Azov.

This opinion was expressed by Vladimir Rogov, a member of the main council of the military-civilian administration of the Zaporozhye region.

Also on russian.rt.com Deficit of subjectivity: why in Kyiv they declare their disagreement with the ceasefire

“The Sea of ​​Azov is forever lost to Ukraine.

Ports in Zaporozhye and Kherson regions will never again be Ukrainian.

I am sure that after the reunification of our regions with Russia, the Sea of ​​Azov will again, as it was before, become an exclusively inland sea of ​​the Russian Federation,” he told RIA Novosti.

Earlier, the representative of the Crimea under the President of Russia, Deputy Prime Minister of the Crimean government Georgy Muradov reported that the Sea of ​​Azov has become a joint sea of ​​the Russian Federation and the Donetsk People's Republic.

Army of the DPR in the Kherson, Zaporozhye and Kharkiv regions of Ukraine

Reserve regiments of the DPR are present in the Kherson, Zaporozhye and Kharkiv regions of Ukraine, the head of the Donetsk People's Republic Denis Pushilin said in an interview with RIA Novosti.

“That is, in fact, this liberation operation is about the same thing: it was impossible to protect the republics only by reaching the borders of the Donetsk and Luhansk people's republics - we would simply push the enemy back.

But those shelling, that aggression on the part of Ukraine would have continued for an unlimited period of time,” Pushilin said.

In addition, the head of the DPR said that residents of the Kherson, Zaporozhye and Kharkov regions "associate their future with Russia."

He also stressed the need to advance in the north of the DPR due to the fact that Kyiv cut off the water supply to Donetsk, Makeevka and Gorlovka.

The ongoing cleansing of Azovstal

According to the head of the DPR, Ukrainian soldiers hiding at the Azovstal plant were identified, they were sent to the place of detention.

In turn, the representative of the People's Militia of the Donetsk People's Republic, Eduard Basurin, on the First Channel, noted that it would take up to three weeks to completely clean up the territory of the plant.

“Because the territory is large, there is where to hide, plus the inconsistency of the overall command at Azovstal - it led to the fact that everyone lived in their own way and everyone was hiding in their own corner,” he added.