In the spotlight: new mass killings in the United States

AMERICAS PRESS REVIEW In the spotlight: new mass killings in the United States Members of the police are gathered outside the Robb Elementary School where the shooting took place, in Uvalde, Texas, May 24, 2022. © AP / Dario Lopez-Mills Text by: Christophe Paget Follow 4 mins Advertisement Read more "  Worst nightmare  ", the worst of nightmares: this is the title of the front page of the H 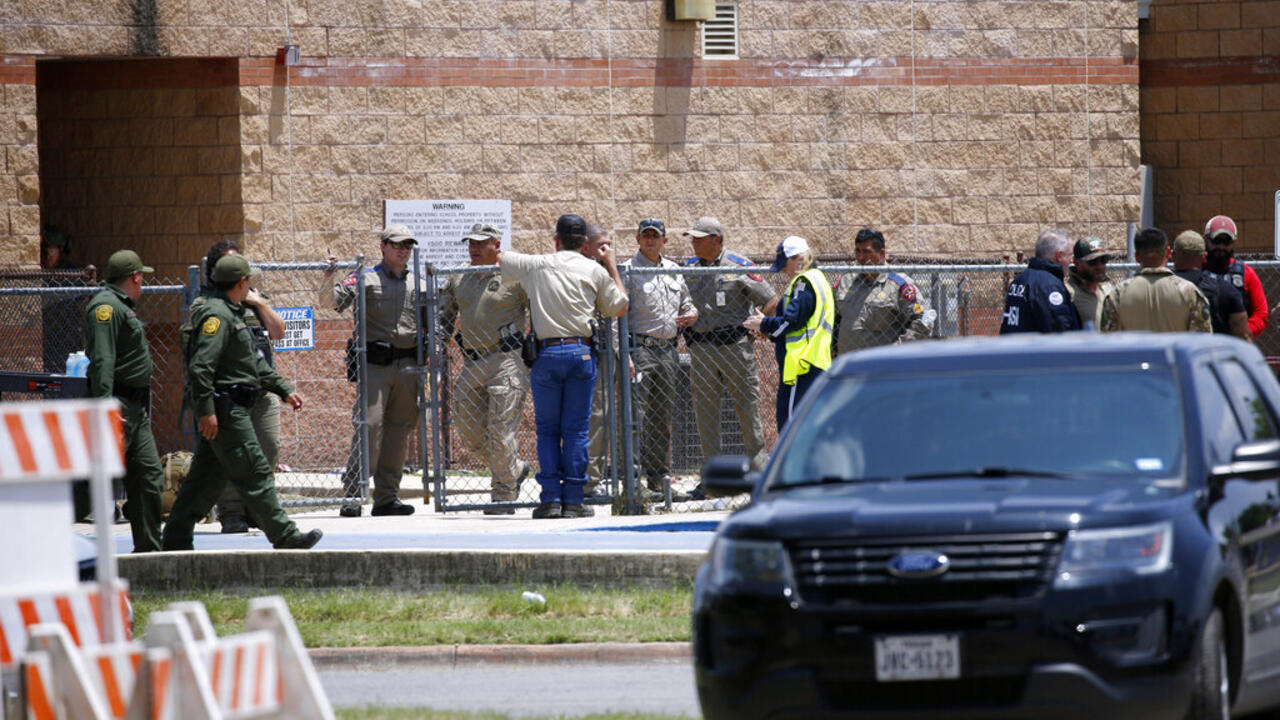 In the spotlight: new mass killings in the United States

Members of the police are gathered outside the Robb Elementary School where the shooting took place, in Uvalde, Texas, May 24, 2022. © AP / Dario Lopez-Mills

", the worst of nightmares: this is the title of the front page of the

, above the photo of a woman in tears, her eyes closed in fear, her hand over her mouth, while In the foreground we see a member of the police wearing a bulletproof vest.

, with a photo of the alleged killer, Salvador Ramos, on the front page.

This Tuesday, May 24, an 18-year-old entered an elementary school in Uvalde, Texas, and killed 19 children and two teachers.

Mass killings, Texas has known them for a long time: the

" in the State, while faced with these tragedies, "

Republicans in Texas have only weakened the laws on arms

Moreover, in its editorial, the

affirms that when the governor of Texas, Greg Abbott, "

said 'never again' after the massacre of the school of Uvalde, the Texans should not believe it

Because when he describes what happened on Tuesday as "

that we are talking about handguns, rifles , or semi-automatic weapon invented for war, the Governor and Parliament have passed one after the other laws that destroy any semblance of regulation based on common sense

signed a law ending the obligation for Texans to obtain a license to carry weapons, allowing virtually anyone who has reached the age of 21

When it comes to gun control, our children are an abandoned generation

But the newspaper notes that "

in recent years, a new generation of Americans have organized themselves, in a movement not unlike the one that brought about sweeping changes to civil rights and America's commitment to Viet Nam

With successes for this new movement, such as the passage, at the level of the States, of laws on weapons.

But the US Senate is blocking, with "

politicians supported by money from the arms lobby

” like Senator Chris Murphy or Speaker of the House of Representatives Nancy Pelosi, who yesterday attacked the Republican Party over its resistance to passing gun control laws. .

The Biden administration could get around this blockade with executive orders ,” the

and the president could set up a cabinet for gun violence prevention, like we have for climate, labor, or transport safety

In the meantime, the NRA, the powerful arms lobby in the United States, still plans to hold its annual meeting this week in Houston, Texas... Last night, reports the

, during a vigil in memory of the victims in Houston, Democratic Congresswoman Sheila Jackson asked the NRA to cancel the event, during which it is, again, still expected that Senator Ted Cruz, Governor Greg Abbott and ex-President Donald Trump take the word.

In Mexico, the Supreme Court decides on abortion

On Tuesday, the Supreme Court allowed minors aged 12 to 17 to abort in cases of rape without parental consent. "

Being able to choose

to illustrate its article.

The President of the Supreme Court said yesterday that "

seeking authorizations is a way of re-victimizing people, and that the State must guarantee a safe process for the termination of pregnancy

It was the states of Baja California and Aguascalientes, in the North, which filed appeals against the decision taken by the Mexican government in 2009 and revised in 2016. They considered that this decision “

encroached on the attributions of their respective Parliaments

In Brazil, a police operation

The toll of the bloody police operation carried out this Tuesday in a favela in Rio de Janeiro worsened, passing in one day from 11 to 25 dead: "

According to the military police, reports

arresting in flagrante delicto more than 50

drug traffickers from different states who were leaving in a convoy towards the favela of Rocinha, in the southern zone of the city.

The plan was foiled, however, when one of the undercover teams was discovered and attacked