In Lot-et-Garonne, a village savors the return of its Rembrandt

Alarms, video surveillance, armored window, "we went all out": in Lot-et-Garonne, the village of Mas-d'Agenais has just recovered its municipal treasure, a "priceless" painting by Rembrandt... 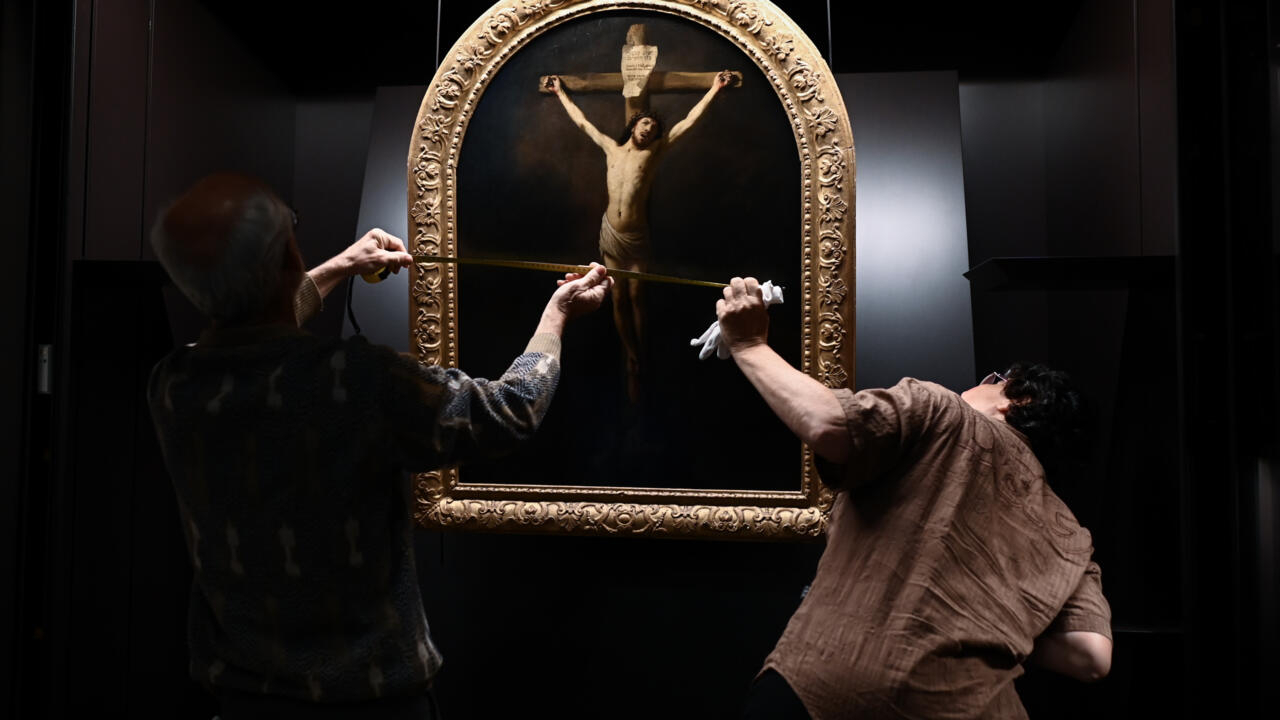 From her tea room, Béatrice Touton "immediately understood" when she saw the rental van in front of the church: "I said to myself + this time, it's coming back +, everyone was asking for it!".

He is the 391-year-old star of the village, the "Christ on the cross" by Rembrandt (1606-1669) back since Tuesday, six years after his exile in Bordeaux because of a faulty window.

History has made this village of 1,500 souls in the market garden and fruit attic of Lot-et-Garonne, the unlikely owner of a painting painted by the Dutch master in 1631, when he was 25 years old.

A work of 100 x 73 cm "exceptional", since through it, "Rembrandt will renew the codes of the representation of Christ, by showing a being in agony, puny and miserable", comments Aude Claret, curator of Historic Monuments at the Drac Nouvelle-Aquitaine.

It all started in 1804 when a captain of the Napoleonic armies, a native of the village, Xavier Duffour, acquired the painting, without an apparent signature, at an auction in Dunkirk before donating it to the parish the following year.

A century later, the work became the property of the town when the Church and the State separated.

It was classified as a Historic Monument in 1918 but was not authenticated until 1959 when a restoration at the Louvre unearthed the illustrious signature: RHL, for Rembrandt Harmenszoon of Leiden.

In 2011, he was loaned to the Louvre for the exhibition "Rembrandt and the figure of Christ".

A transport box, containing Rembrandt's painting "Christ on the Cross", at Saint-André Cathedral in Bordeaux, May 24, 2022 Philippe LOPEZ AFP

For decades, it was exposed to the eyes of sometimes distant visitors, sometimes in a simple wooden cupboard, then in a display case, but "without any kind of high security".

"Anyone could have nicked him", sums up the mayor Claude Lagarde.

A Rembrandt neither in a museum nor with a collector but in a town, "it's very rare", assures Aude Claret.

The work "is associated with the village, so it is very important that it returns to where it has been since the 19th century".

"The richest municipality in France"

For months now, the State and the village have been discreetly preparing the transfer of the "Rembrandt" from its temporary showcase in the Saint-André cathedral in Bordeaux to its new setting in Mas-d'Agenais in the Romanesque collegiate church.

Packed with a luxury of precautions in a wooden box, between several layers of foam to avoid "thermal shocks", the painting made the trip incognito aboard a van escorted by an unmarked car of gendarmes.

The town hall and the Drac have gone all out to offer him a new ultra-secure showcase reproducing the natural ventilation to which he has always been accustomed.

It is "remarkably solid, it's amazing", notes Christian Morin who, with his wife Françoise, a restorer like him, has been monitoring the "material" of the painting for 20 years and will still visit it regularly in its armored case.

A transport box, containing Rembrandt's painting "Christ on the Cross", arrives at the Saint-Vincent church in Mas-d'Agenais, in Lot-et-Garonne, on May 24, 2022 Philippe LOPEZ AFP

The development of the security system including cameras "everywhere", sensors and alarms, should thus "reassure a little" the mayor, still impressed by the potential value of municipal assets.

In 2021, an auction house interviewed by the Sud-Ouest newspaper estimated it at 90 million euros – the equivalent of 70 years of budget at Mas-d'Agenais.

"We are the richest municipality in France, except that we do not have the means", laughs the city councilor.

"It is an important religious painting, a range of several tens of millions of euros does not seem abnormal to me", confirms to AFP Olivier Lefeuvre, director of the Old and 19th century Paintings department at Sotheby's.

Such an object classified as a Historic Monument is of "priceless value" and is in fact "not intended to be sold", insists Ms. Claret.

The community doesn't even think about it.

The enhancement of the painting in a freshly renovated church will "reinforce its tourist attractiveness", underlines Arnaud Petit, elected to finance and heritage.

When the painting arrives, in a religious silence, a member of the welcoming committee slips: "It's moving to see it come back".