“Nothing more than a fiction”: why did Finland and NATO conclude a technical agreement to strengthen the country's defense capability

Finland and the North Atlantic Alliance have signed a technical agreement that strengthens the country's defense capability, the Finnish Defense Ministry said. The department emphasized that the main goal of signing this document is to make it possible to "effectively receive military assistance." In addition, the technical agreement will speed up the process of coordinating host country support through Finland-NATO, including the use of armed forces “in crisis management”. According to experts, this document is intended to create the appearance of security guarantees for Helsinki. However, as analysts note, in fact, this agreement is “nothing more than a fiction” and another fan of hysteria about the “Russian threat”. 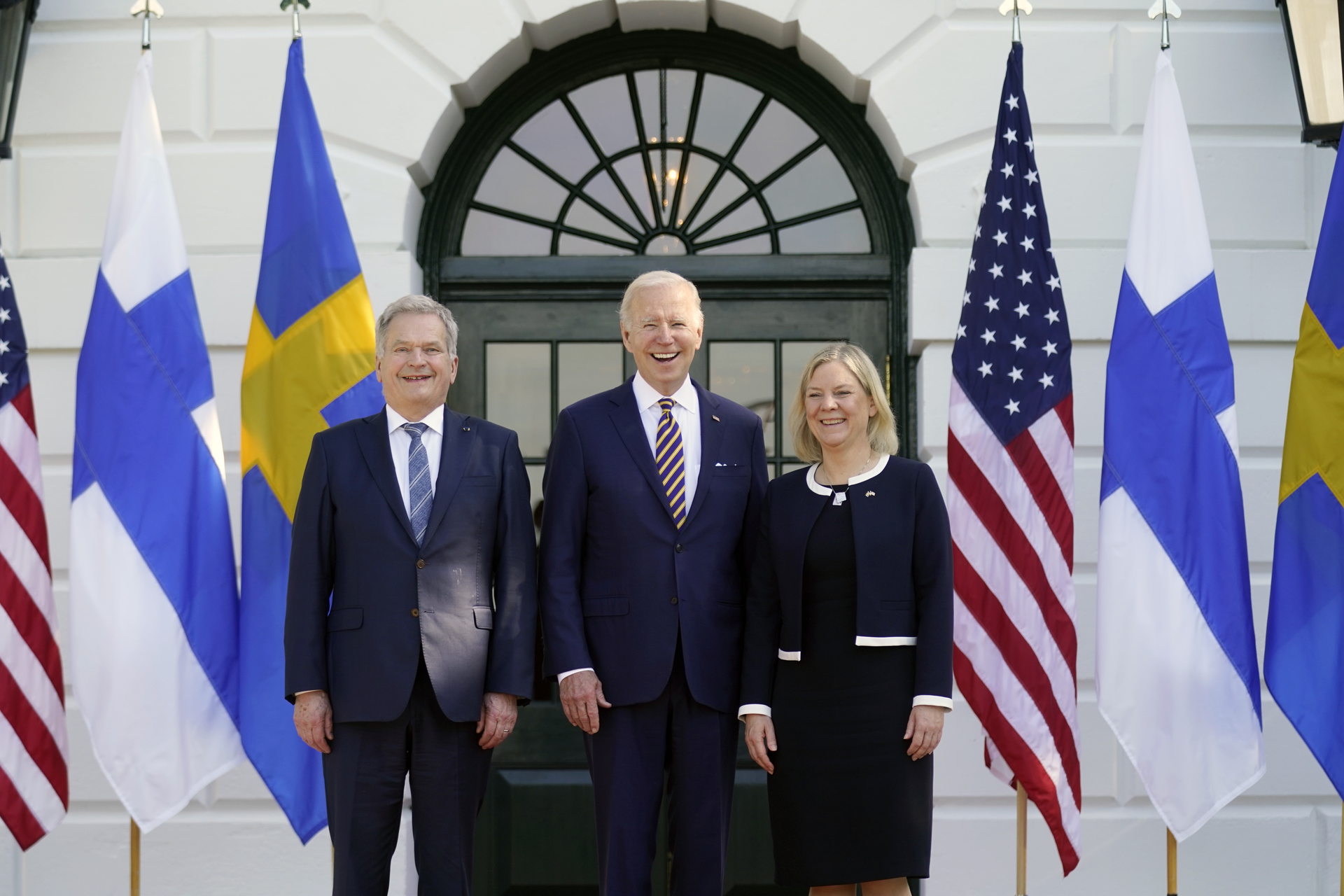 Finland and NATO have signed a technical agreement that strengthens the country's defense capability, the Finnish Defense Ministry said.

“On 24 May 2022 in Mons, Belgium, Finland and NATO, acting on the principle of reciprocity, signed a technical agreement on host country support,” reads a statement posted on the website of the Finnish Defense Ministry.

According to Finnish Defense Minister Antti Kaikkonen, this step leads to "strengthening the defense capability" of the state.

The main goal of signing this document and expanding practical opportunities is to make it possible to effectively receive military assistance, ”the press service of the Finnish Ministry of Defense quoted him as saying.

As noted in the department, the technical agreement will also speed up the process of agreeing on host country support through Finland-NATO "during the receipt of assistance and exercises", as well as when using the armed forces "in crisis management."

“Following Finland’s announcement of readiness to join NATO and given its aspirations for membership in the North Atlantic Alliance, expanding the possibilities for receiving military assistance will remain a key priority,” the Finnish military department said.

Meanwhile, Washington and NATO expressed confidence that Finland and Sweden would be able to resolve the issue with Turkey, which opposed their inclusion in the bloc.

This was stated by Deputy Pentagon Chief Kathleen Hicks, noting that countries can solve the problem directly, without intermediaries.

“Turkey has expressed concerns about issues related to terrorism and its security interests.

We must do what we always do in NATO, which is to sit down and consider the concerns expressed by our allies.

I am sure that we will be able to do what we have done many, many times in NATO: find a way to solve these problems, reach an agreement, and then accept Finland and Sweden as full members of our alliance,” Stoltenberg stressed.

According to him, it is also necessary to ensure that NATO takes into account some of the concerns that Finland and Sweden have expressed about the "transition period".

“Therefore, we have also expanded our presence in the Baltic region: an amphibious assault group under NATO command and an expanded presence in this region of Europe,” the NATO Secretary General said.

“Russia will be obliged to respond”

Recall that on May 18, Finland and Sweden simultaneously filed their official applications for NATO membership.

However, Turkey said it would not support the inclusion of Finland and Sweden in the alliance without written guarantees to stop supporting the Kurdistan Workers' Party (PKK), which it considers a terrorist organization.

In addition, Ankara demands the lifting of sanctions on the supply of defense industry products to Turkey.

Croatian President Zoran Milanovic also spoke out against the entry of Finland and Sweden into NATO.

According to him, this position of Zagreb will be maintained until the issue of electoral reforms in Bosnia and Herzegovina is resolved.

The Russian Foreign Ministry said that the intention of Sweden to join NATO is dictated by the desire of the United States.

“More than 200 years of Swedish neutrality, which guaranteed security and prosperity for the kingdom, are now in the past.

So why wasn't there a referendum?

Because people in Sweden have not asked for a long time.

The Americans decide for the Swedes, ”wrote the official representative of the Russian Foreign Ministry, Maria Zakharova, in her Telegram.

According to the Secretary of the Russian Security Council Nikolai Patrushev, Moscow will be obliged to respond to the entry of Finland and Sweden into NATO.

“If the military infrastructure of the alliance expands on the territory of Finland and Sweden, Russia will perceive this as a direct threat to its own security and will be obliged to respond,” Patrushev said in an interview with the Argumenty i Fakty newspaper.

Nikolai Mezhevich, chief researcher at the Institute of Europe of the Russian Academy of Sciences, president of the Baltic Studies Association, noted that the technical agreement concluded between Finland and NATO is intended to create a kind of security guarantee for the country, but in fact this document is “nothing more than fiction”.

“Firstly, no one is attacking Finland, so the issue of security guarantees is hanging in the air.

But this is not a serious conversation.

The question immediately arises - who, in fact, threatens Finland?

If Russia is meant, then the Russian Federation had no territorial problems with this state, excellent economic relations developed between the countries, ”Mezhevich said in an interview with RT.

According to him, taking into account the experience of conducting joint affairs between Moscow and Helsinki, we can conclude that the decision to join the bloc was not made by the Finnish authorities.

“Finland is refusing mutually beneficial cooperation with Russia in favor of the interests of the United States and NATO, not of its own free will, but due to Washington’s completely understandable geopolitical coercion.

It's the same with Sweden.

It is no coincidence that there was no popular referendum on the issue of inclusion in the bloc in these countries.

The people weren't asked anything.

And this is in Finland and Sweden, which were considered a beacon of democracy in Europe,” the analyst said.

Mezhevich also commented on the speeches of Turkey and Croatia against the accession of Finland and Sweden to the bloc.

“Ankara and Zagreb are trading and, most likely, they will receive some of their dividends from the bloc, some of their bonuses for agreeing, and after that they will change their position and withdraw their objections.

Today, the entry of Finland and Sweden into NATO is only a matter of time,” the expert stated.

In turn, Corresponding Member of the Academy of Military Sciences Sergei Sudakov noted that the signing of a technical agreement is a kind of compromise solution for the period until Turkey and Croatia agree to admit Finland to the bloc.

“NATO wants to make it clear to Helsinki that if the terrible Russia attacks, although this is a fantastic and unrealistic scenario, the bloc will have the opportunity to provide support to Finland.

But given that this country is completely safe and Moscow, of course, has no such plans, this is another fan of hysteria about the “Russian threat”.

And Finland will not receive any advantages in terms of defense capability, ”the expert said in a comment to RT.

According to Sudakov, the technical agreement is intended to serve the Finns as a certain “illusion of security”, as well as a symbol that the process of joining NATO will indeed continue.

“This step only determines the vector of Finnish policy.

This is an advertisement that the country is accelerating its practical entry into NATO.

The only problem so far is the position of Turkey and Croatia, but the Secretary General of the alliance has already stated that they will work with this in the bloc, ”the analyst said.

Sudakov believes that if they do not change their position soon, Ankara and Zagreb will be under very serious pressure from Washington and NATO leadership.

“This could take all summer, and then after some compromises from NATO and the United States, Turkey and Croatia will say that they thought better and agree to membership.

At the same time, the United States and the NATO leadership are already tired of playing democracy and they simply want to throw off their masks, emphasizing Washington's leadership in the bloc.

Over time, the role of the United States in NATO will become more and more manifest, their supremacy will become obvious, ”the expert is sure.

Sudakov also believes that even if Ankara does not agree to the admission of Finland and Sweden, the United States will initiate a change in the charter of the alliance.

“In this case, the words of Turkey will no longer mean anything, as well as the objections of Croatia,” the analyst said.

At the same time, Mezhevich believes that after joining the bloc in Finland, the current government can carry out “promotion of nationalist ideology” in a short time.

“And it may well be that in a certain number of years Helsinki will one day demand from Moscow the former borders of its country, for example, 1939.

And for the Russian Federation, this will be a challenge, to which it will undoubtedly respond,” the expert concluded.