Face-to-face talks between the leaders of the United States and Japan, hit it off on this issue

China News Service, May 24. On May 23, local time, Japanese Prime Minister Fumio Kishida held talks with visiting US President Biden at the State Guest House in Tokyo.   As soon as the talks began, Biden emphasized to Fumio Kishida that "the U.S.-Japan alliance has long been the cornerstone of peace and prosperity in the Indo-Pacific region, and the United States remains fully committed to main 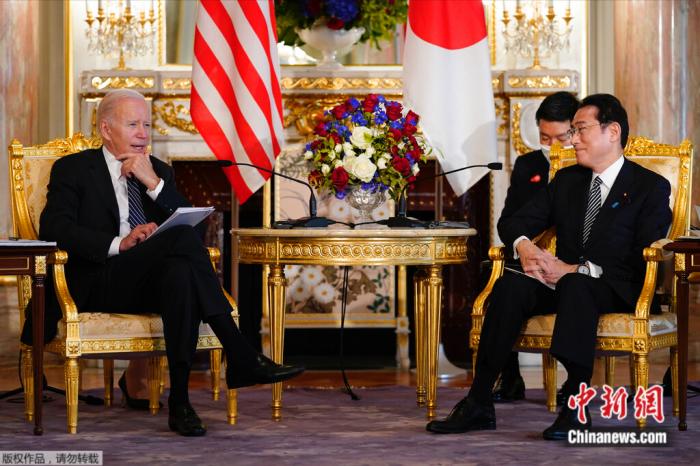 As soon as the talks began, Biden emphasized to Fumio Kishida that "the U.S.-Japan alliance has long been the cornerstone of peace and prosperity in the Indo-Pacific region, and the United States remains fully committed to maintaining Japan's defense."

Re-emphasize the Indo-Pacific region, the U.S.-Japan alliance, and the "nuclear umbrella"... On the one hand, this U.S.-Japan summit demonstrates the United States' intention to build a closed and exclusive "small circle", and on the other hand, it reflects the Kishida government's willingness to actively become a "small circle". Containment of China” is the vanguard, and then changes the calculation of the regional geopolitical pattern.

At the beginning of the talks on the 23rd, Biden made a clear statement: "The U.S.-Japan alliance has long been the cornerstone of peace and prosperity in the Indo-Pacific region, and the United States remains fully committed to maintaining Japan's defense."

Singapore's "Lianhe Zaobao" analyzed that Biden's remarks are assuring the Japanese side that the United States will be fully committed to safeguarding Japan's defense.

For a long time, Japan has always regarded itself as a nuclear victim on the one hand, but on the other hand, it has backed the "nuclear umbrella" of the United States and opposed the United States' abandoning the policy of first use of nuclear weapons.

The United States, on the other hand, has been promoting the construction of a military "small circle" with a very Cold War flavor by strengthening the "nuclear umbrella" and other means.

With the introduction of the so-called "Indo-Pacific Strategy", Japan has followed suit with the United States, and even talked about "deepening the Japan-US alliance".

Since the Biden administration took office, it has continuously emphasized strengthening the US-Japan alliance.

Several Japanese prime ministers, from Shinzo Abe to Yoshihide Suga to Fumio Kishida, responded positively to the U.S. gestures, deepening the bondage. In fact, in order to reshape the international order and promote the reform of the United Nations and the Security Council that Japan has been calling for for many years.

Just a week after the US-ASEAN special summit concluded in Washington, the capital of the United States, Biden opened the Asia-Pacific trip and announced the launch of the "Indo-Pacific Economic Framework", which 13 countries including Japan and India will sign to join.

Although it has encountered a wall in ASEAN countries, so far, Japan has shown great approval for this proposal.

And Japan has shown an attempt to change the geopolitical pattern in the Asia-Pacific region.

As Fumio Kishida stated during the meeting that day: "To realize a free and open Indo-Pacific based on the rule of law, Japan and the United States are willing to lead the international community."

Because this so-called "strategy" has been exposed, it not only wants to erase the name of "Asia-Pacific" and the effective regional cooperation structure in the Asia-Pacific region, but also wants to erase the peaceful development created by the joint efforts of countries in the region for decades. Results and momentum.

It can be said that Sima Zhao's heart is well known to passers-by.

Wang Yi emphasized that the people of the Asia-Pacific region still have a fresh memory of the conflict and confrontation dominated by hegemony, and what they now pursue is national stability and a happy life.

Asia-Pacific countries are generally reluctant to choose sides, and the mainstream voice is that they hope that countries can live in harmony and cooperate for win-win results.

The trend of the times in the Asia-Pacific region is to promote regional integration and build an Asia-Pacific community with a shared future.

In the face of a turbulent and changing world, the region has maintained overall peace and stability. The Asian development train took the lead in breaking out of the haze of the epidemic. The GDP growth rate in 2021 will be as high as 6.3%. It depends on the hard work of the people of the Asia-Pacific region.

Wang Yi said that the "Indo-Pacific Strategy" concocted by the United States is under the banner of "freedom and openness", but it is keen to form "small circles" by forming gangs; it claims to "change China's surrounding environment" in an attempt to contain China and allow the Asia-Pacific region. The country acts as the "pawn" of US hegemony.

What is especially dangerous is that the US has torn up its pretense, provoked and played the "Taiwan card" and the "South China Sea card", trying to confuse other regions and then the Asia-Pacific region.

Facts will prove that the so-called "Indo-Pacific strategy" is essentially a strategy for creating divisions, a strategy for inciting confrontation, and a strategy for destroying peace. No matter what packaging or vests this strategy is made, it will ultimately fail. strategy.

The people of this region should warn the US side that the outdated Cold War script must never be repeated in Asia, and the turmoil and wars that are taking place in the world must never happen in this region.