Japan issued an official protest on Tuesday, May 24, after Chinese and Russian bombers flew together near its territory, while on the same day was held in Tokyo a… 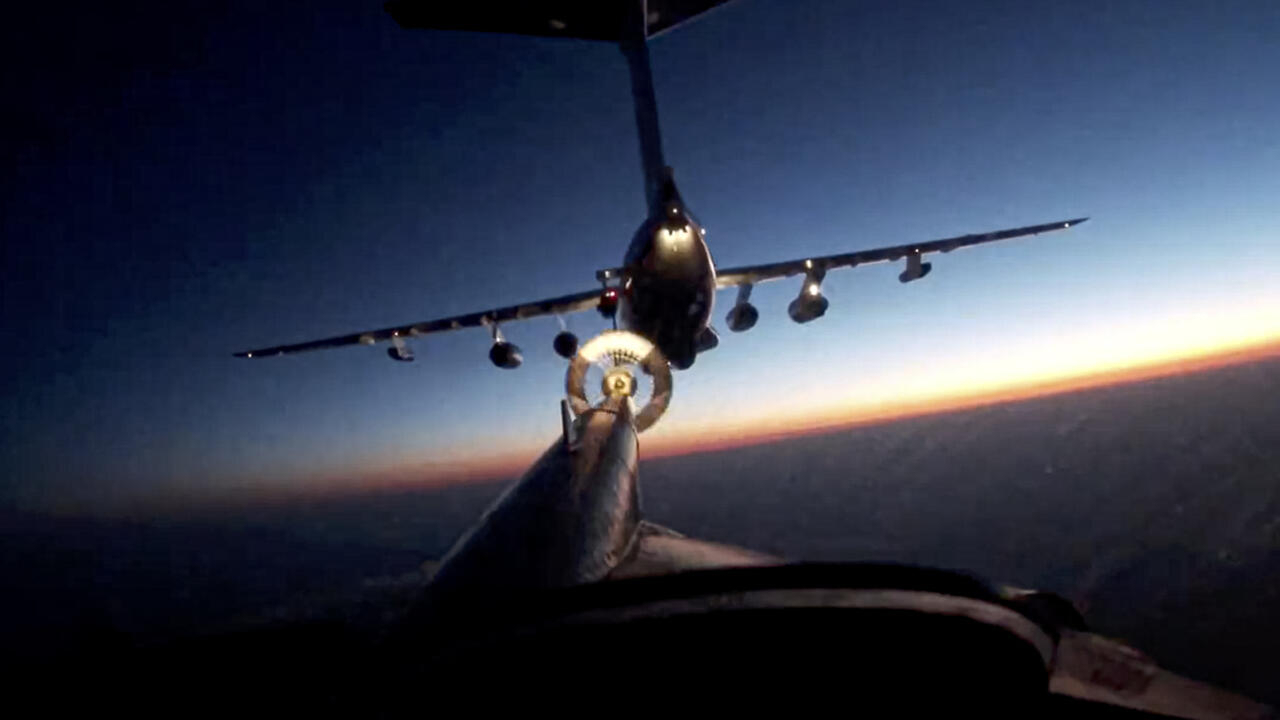 An Il-76 air tanker prepares to refuel a Tu-95 strategic bomber, over neutral waters of the Barents Sea, Norwegian Sea and North Atlantic.

Photo taken from a video provided by the press service of the Russian Ministry of Defense in early February 2022. AP

Japan issued an official protest on Tuesday, May 24, after Chinese and Russian bombers flew together near its territory, while a meeting of the "Quad" was held the same day in Tokyo, which informally brings together the United States, Japan, Australia and India.

The Japanese Minister of Defense spoke on Tuesday to express the "

" of the Japanese archipelago.

After which four planes in total, "

", he added, adding that a Russian surveillance and intelligence plane had, moreover and also this Tuesday, flown from the north of the island of Hokkaido to the Noto peninsula.

Mr. Kishi concluded his remarks by qualifying these actions as particularly “

," said the Minister of Defense.

Japanese Defense Minister Nobuo Kishi, left, during a meeting with Defense Secretary Lloyd Austin at the Pentagon on Wednesday, May 4.

As the international community responds to Russia's aggression against Ukraine, the fact that China has taken such action in conjunction with Russia...is concerning.

This cannot be underestimated

In addition to the

about Taiwan, these coordinated flights between Russians and Chinese indeed come as Tokyo hosts a summit of the "Quad", an informal alliance of American, Australian, Indian and Japanese leaders. (see box).

►Read also: “The international order” on the Quad menu;

Beijing has confirmed: these flights, indicates the Chinese Ministry of Defense in a press release, are part of  the

in the airspace over the Sea of ​​Japan, the East China Sea and the maritime areas of the Western Pacific

", writes the People's Republic of China.

Moscow also confirmed, in a press release, this information, specifying that Russian Tu-95 and Chinese Xian H-6 strategic bombers had participated in the flights, for 13 hours, over the seas of China and Japan, according to the explanations provided. by the Russian Defense Ministry.

The Xian H-6, a licensed copy of the Soviet Tupolev Tu-162 bomber, built for the Chinese Air Force.

Chinese and Russian planes did not enter Japanese airspace.

But this is the fourth time that such grouped flights have taken place near the archipelago since last November, according to the Japanese Ministry of Defense.

Still in a press release, the leaders of the informal Quad alliance meeting in Tokyo also reacted after these operations by the Russian and Chinese air forces, warning against any attempt, they say, "

to modify the status quo by force

without explicitly citing the Russian Federation and the PRC.

#NeptuneShield demonstrates the integration of high-end maritime, amphibious & expeditionary strike capabilities to support the defense of the @NATO Alliance!

The "status quo" is in a way

", even today, of Chinese projection on the high seas and in its depths, for reasons relating to nuclear deterrence, in particular.

A US official reports, via the Reuters news agency, that this Sino-Russian operation demonstrates the full extent of current military cooperation between the two countries.

This displayed proximity between Russia and China raises questions.

This is explained by Marianne Péron-Doise, expert researcher on Asia at the Institute for Strategic Research of the Military School.

It is Russia that is trying to seek support from China.

There is nevertheless a rapprochement of opportunity between these two "actors of disorder" who, indeed, find an interest in supporting each other, because their strategic interest is effectively to counterbalance the initiatives , to the economic, strategic and diplomatic influence of the United States.

So this rapprochement is understandable.

The Chinese navy and the Russian navy have already carried out exercises together, which have already raised concerns, since we wondered how far they could go.

Marianne Péron-Doise, expert researcher on Asia at the Strategic Research Institute of the Military School (Irsem)

According to an American official, this is the first joint Sino-Russian exercise since the start of the war in Ukraine on February 24.

Beijing thus proves its support for Moscow, while the American president has declared that Washington would be ready to use force in the event of a Chinese offensive on the island of Taiwan.

Note that NATO is leading, from May 17 to 31, a real show of force in the eastern Mediterranean, "Shield of Neptune 2022".

The "Quad" does not want to openly challenge China

The "Quad" opposes any change of status quo by force.

But in his final statement, he avoids condemning China and Russia.

Why this caution of the four leaders of the Quad towards Russia?

Because India refuses to condemn the invasion of Ukraine or reduce its trade with Russia.

However, the United States, Japan and Australia use the Quad to court India, which is due to its non-aligned status.

The four countries also don't want to be seen as openly defying China.

In their statement, the Taiwan archipelago is not mentioned.

US President Joe Biden confirms on Tuesday that the US "

On Monday, he said Washington

Bilaterally, the member countries of the Quad denounce the Russian atrocities in Ukraine, or the militarization of certain areas of the Pacific Ocean by China.

Within the Quad, they highlight its main founding principles: to maintain a free Indo-Pacific;

develop “soft power” actions to mark their difference with the Chinese and Russian authoritarian regimes.

This is how the Quad will invest $50 billion over five years in projects for more secure IT infrastructure, and in the fight against climate change to forge links with nations in the Pacific, such as

the Solomon Islands which have concluded a security pact with Beijing

The Quad will set up a maritime surveillance system to track Chinese activities in the area, such as illegal fishing.

The Quad group thus cements its informal alliance in Tokyo, even if the latter does not yet constitute an anti-Chinese bloc.