Cooking borsch in the heart of Paris, vital for Ukrainian refugees

Intensely red in colour, the borsch is simmering, while Yulia, a Ukrainian refugee, flips pieces of lard over a frying pan to season the varenyky, Ukrainian apple ravioli... 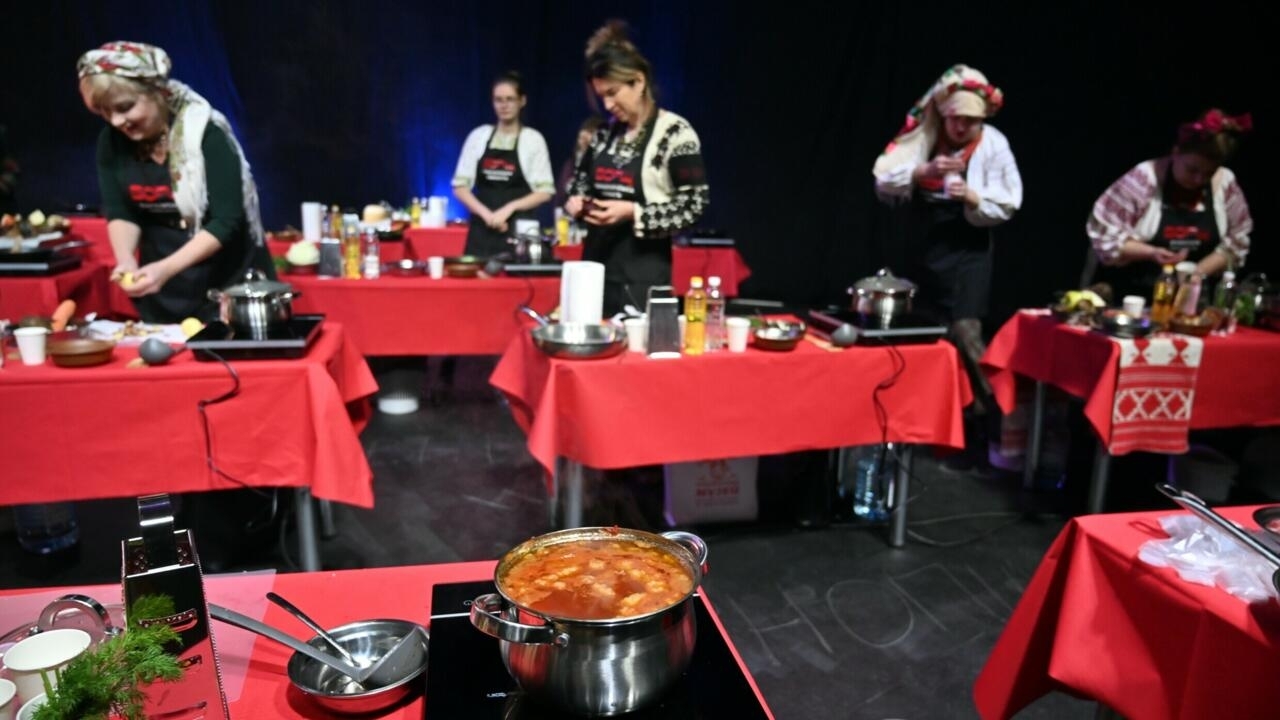 "It is important to promote our culture," says Yulia Tkatchenko, 45, from Cherkassy (center), who fled the war with her daughter.

She is one of the three Ukrainians who lead the ephemeral project of American chef Daniel Rose, who has transformed his Parisian restaurant "La Bourse et la vie" into "Le Borscht (borchtch in French) and life".

You can eat traditional Ukrainian dishes like varenyky with cherries, gretchanyky (buckwheat dumplings with meat) or honey cake with sour cream, right in the center of Paris until the end of May.

Because of the family history of Daniel Rose, whose great-grandmother had immigrated to the United States from a village in Eastern Europe on the borders of present-day Ukraine, this war has a particular resonance for him.

"This project is a small effort so that people can continue to live," he told AFP.

The name of the ephemeral bistro cannot be explained solely by phonetic similarities between the stock market and the borsch: defending "the national dish of a people that we are trying to deceive" is "defending Ukrainian identity", he points out.

Even before the February 24 invasion, the "borsch war" was raging between Ukraine and Russia, with kyiv seeking to have this beetroot and cabbage soup listed as a UNESCO intangible heritage, like Neapolitan pizza. or wine from Georgia, and accusing Moscow of cultural appropriation.

Sign that the road remains long to travel for Ukraine, the Michelin guide, bible for foodies in the world, cited borsch among the star dishes of the "Russian culinary scene" by launching its Russian edition in 2020 before withdrawing of the country because of the war in Ukraine.

This gastronomic fight has been relegated to the background, but has not lost its relevance in the face of the speech of President Vladimir Putin who denies Ukraine its identity and considers that the Russian and Ukrainian peoples are one.

"Borsch is a strong weapon. Many people around the world know borsch, but few know that it's a Ukrainian dish," says Ivan Tabalov, Ukrainian project leader from the southern city of Odessa. from Ukraine, and a graduate of the French Culinary School Le Cordon Bleu.

"We try to make customers taste it and remember it. Ukraine should not be associated only with war, but also with gastronomy," he says.

Some customers came "out of pity", reluctant to discover "new tastes" which annoys him.

"We are not broken, it's not a chore, we are happy to present our culture here".

Alina Prokopenko, 22, a law graduate, art history student and self-taught pastry chef, fled kyiv with her mother and sister, who stayed with friends in Austria.

She went all the way to Paris to find a job in the restaurant business.

She responded to Daniel Rose's announcement and offered him desserts such as honey cake, or syrnyk, a kind of cheesecake made in Lviv, in western Ukraine, or even strawberries served with milk, such as his grandfather used to eat it.

"It's amazing, Daniel loved the idea," she exclaims.

"It's this family cooking and no restaurant that reflects the national identity," said Daniel Rose, explaining that there was no point in preparing the "chicken kyiv" invented by a chef from a great hotel.

After the end of the ephemeral project, Daniel Rose says he wants to keep borsch on the menu of his French cuisine bistro.

"I took a liking to borsch, which has the same delicacy as a stew or other simmered dish. In fact, it is partly simmered, the beetroot having a very subtle taste and keeping a lively side, little exploited in French cuisine", he concludes.