In black because "in mourning", they unrolled the names of dozens of victims of feminicide on the red carpet: the "gluers" imposed the theme of gender-based violence at the 75th Cannes Film Festival, subject… 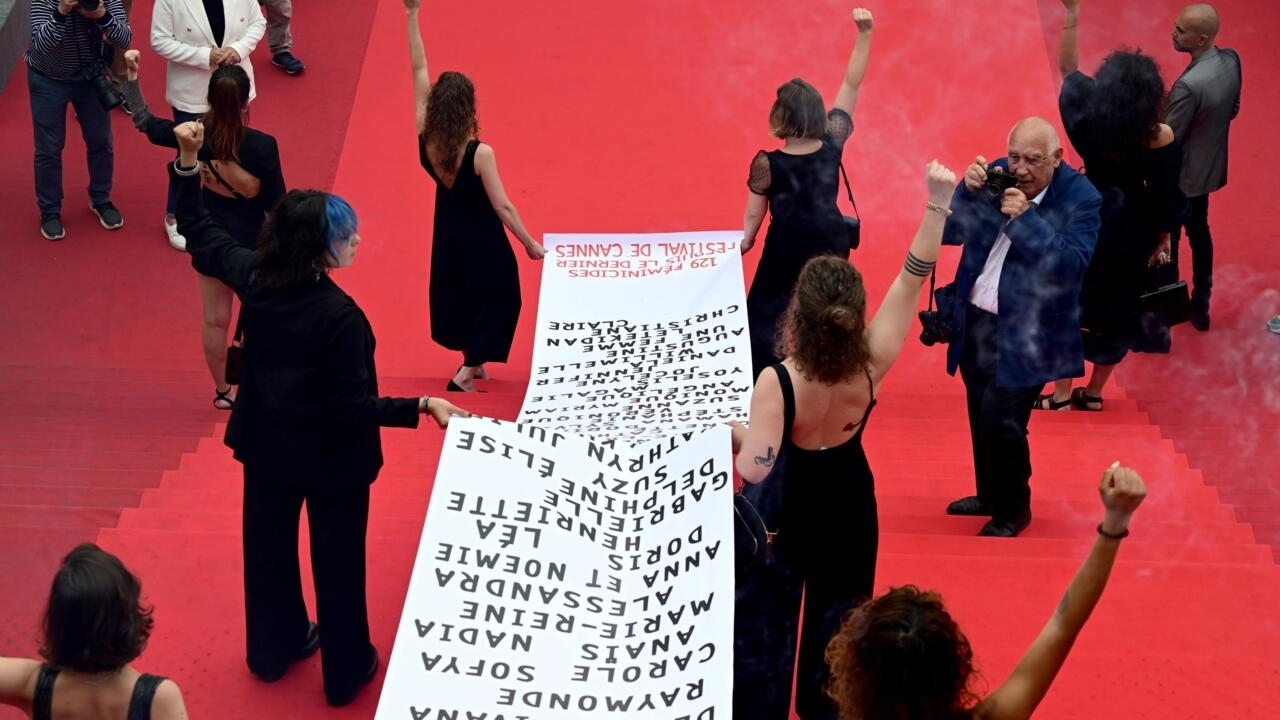 Prostitutes massacred in Iran in "Les nuits de Mashhad" by Ali Abbasi, a battered woman in "Decision to leave" by Park Chan-wook, and a horrific feminicide in "La nuit du 12" by Dominik Moll... violence against women are everywhere in Cannes this year, and at the heart of a French documentary screened out of competition, on the "colleuses".

“Céline, defenestrated by her husband”, “Presumed liars”, “Even my dog ​​understands when I tell him + no +”, “My body, my choice, and shut your mouth”… These are the messages plastered on the walls throughout France, on white A4 sheets, which first appealed to documentary filmmakers Marie Pérennès and Simon Depardon.

Their film "Riposte féministe" gives voice to these young women, "the voice of those who no longer have one" in their words.

From Amiens to Marseille, experienced activists, experienced in feminist theses or themselves victims of violence, they express their anger in the face of a sexist society.

The producer of "Feminist response", Claudine Nougaret, in Cannes on May 23, 2022 CHRISTOPHE SIMON AFP

“Many people who were feminists but had never demonstrated joined us”, explains to AFP Elvire Duvelle-Charles, “gluer” from Ivry, highlighting the “simplicity” of the process.

Initially created to pay tribute to the victims of feminicides, the movement quickly evolved "because violence starts when you are eight years old and they put your hand on your buttocks in the metro".

Some found in the collective "listening", and "since I stick, I am no longer afraid in the evening in the street", says one of them in the documentary.

"We wanted to restore the daily life of these women, absolutely not to have people who would tell us + you have to think like this, like that +, we would never have listened", explained to AFP Simon Depardon.

For this, the team followed the "gluers" during their nocturnal trips but also outside to "have moments when the camera absolutely does not feel, this is what makes the spectator and the spectator can forge their own idea".

"We say + Feminism has never killed anyone +, but shouldn't we go further in the fight?" Asks one of them on the screen, immediately contradicted by another splicer who judges that violence "is domination".

"We wanted to show that debates like this between activists are what move us forward, which pushes us to think differently," says Marie Pérennès.

"Riposte" also shows hostility towards "gluers": "we will systematically try to silence them", says Simon Depardon.

Through their messages, the "gluers" want to "leave a mark in the public space, take ownership of the street", they say.

It is also in the street that feminists demonstrate, shouting at the police: "Cops, cops, take our complaints!".

The police treatment of domestic violence is the theme of another French film screened at Cannes, a fiction by Pauline Guenna and Dominik Moll, "La nuit du 12", with Bouli Lanners.

The thriller begins with a true story, the murder of Clara, 21, burned alive near Grenoble.

Without caricature but without indulgence, the film deconstructs the implacable cogs of a biased police investigation, in which the victim is always somewhat guilty...

Clara was too pretty, too reckless, changed partners too often: for the police - all men - her murder owes nothing to chance.

Finally, it is thanks to female characters that one of the investigators will "question himself", analyzes Dominik Moll during an interview with AFP.

"As Yohan told the judge, + there is something wrong between men and women +".